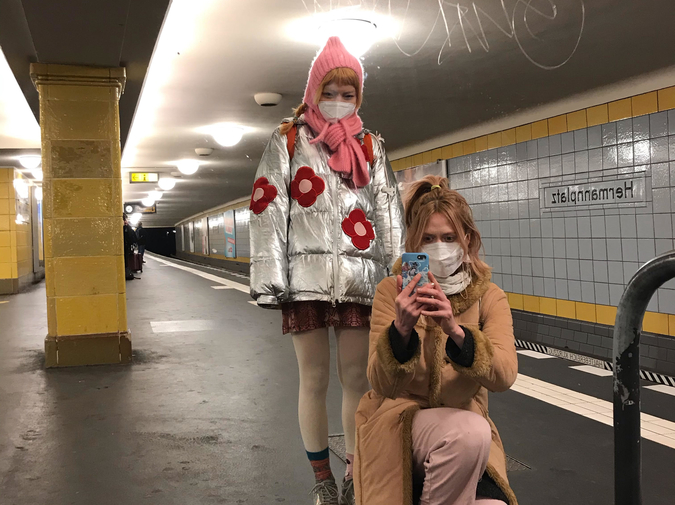 i had too much money and too little desire to do drugs, so i drank vodka shots. shot after shot. in the early evening hours when you were still on this planet, when you still had one foot on this planet we wandered to the seats of the beautiful bar with 15 story high ceilings and concrete all around. you know that one? right by the berghain floor. oh well. we spoke from some great depth i had thought. we spoke about our future and our love, we spoke about plans, we spoke about being partners and traveling through reality together. i said that i wanted to marry you, but i said it without saying it, i said i wanted to give birth to your baby, but i said it without saying it. you said you found a partner. but now i’m alone in your bed, and so many things happened since that moment 13 hours ago. i had too much vodka, and jealousy bubbled up inside me. i explained to someone that i wasn’t high, that i was only very drunk, they said that alcohol was such a dangerous drug, so i said that at least i’m emotional on it now and not for the week after. it felt unimportant then, to tell you things, because you weren’t here anymore, both feet had left this planet, they were floating in space with your other friends, but i stayed here, grounded. it felt like you shouldn’t have left, there were others to talk to, there was something that happened on the dance floor, i told you something, you were always preferring to dance next to one of the girls you came with, i felt you were floating now with them, in a bubble in space, the bubble has a name, ecstasy, keta, speed, coke, that’s the name of the bubble. i want to burst it, i can’t help it, i am evil, i am made with a million needles sticking out of each pore of skin and i’m coming to burst it. so i tried, and we fought on the dance floor, i thought i could bring one foot back to this planet if only to fight with me. your eyes are blocked, they look like zombie eyes, because you are so high from some ketamine cocktail, so they look really dark, like they are cut from evil. and you look like you’re going to punch me, and then you look like you’re going to cry, every muscle in your chest is tense, and you are screaming at me from the top of your lungs on the dance floor, the top, you are screaming at me from that place in space that you are floating in, you are not bringing one foot back to this planet even to argue with me. your friends scurry past us, i cannot imagine how they must hate me for dragging this drug angel into the mud, the swampy mud of my own insecurity. i don’t know what to do, you try to kiss me and then i push you away, you make a fist and you put it in front of me, you show me this universal sign of a tight tense fist in front of my face, there is no language barrier, but the fist leaves my sight as you are walking away and i follow it, i chase you because of course you cannot leave like that, even when your eyes are cut from evil, and you turn and say never push me again, and i say ok i’ll never push you again. and that’s the moment when you actually do cry, and i am sorry, because i realize that i could never have brought you back to this planet, so instead we are on a horrible roller coaster ride, it is so run down and shaky, no one except people with a real death drive get on, and my death drive is only one of those easy superficial ones so i’m wondering how i got here, but even playing with fire burns down cities sometimes, the cities you built up in your life, ones you thought would stand the test of time, but you play with fire and then it all lights up in flames in front of your eyes. so i took you there, and i feel guilty, and when it seems that you won’t cry again, or tense up your whole body to fight, when it seems like it’s right, i hold you, i try to make it better, and somehow we resolve it in some way, by finding a less populated stairway and talking through it, you explain it to me, you explain to me my own insecurity, but even your explanation may never help my superficial death drive, which is more important i wonder. and in your explanation you are telling me that i am goddamn beautiful, and i realize that it was what i was waiting for, and then my death drive is satisfied, i realize that if we had made love before we came to this club, or that if i could remember how it feels to be desired by you, remember it in that fresh way where the scent is still under your nostrils, and the phantom touch can give you spontaneous goosebumps, if i could remember it like that then i probably wouldn’t have done it, have turned into the creature with a million pins sticking out of her pores. i realize this, i realize this need to be desired as the darkest force that is so much alive inside me. and i don’t know where it was born or who made it, no i don’t know i promise, because i don’t think that i gave birth to it. it was maybe made in the way where i learned to be loved through desire only, but that’s what i need to write about next time.

so i walk home with your keys in my pocket, but i’m still sad, probably just like you. and every step i take away, seems more wrong and more right simultaneously, as if i were treading a middle ground that contains a fork, as if it were one of the most important walks i’ve ever taken. a fork that branches out nonlinearly with time, and in a parallel reality i am somewhere else, i am still in the big concrete playground of berghain, that when you disappeared i was the berglind that took her coat off again and put it back in coat check, and wandered around creating another story, but that’s not my reality, my reality is this rainy walk, is the mud puddles, mud lakes, mud oceans that i am wading through. the reality is my crooked hair style and the rain that is falling on my face, no it isn’t so bad my reality, i can still see a few meters ahead of me, it isn’t that kind of rain that makes you walk with your head down, that makes walking a struggle, i can still walk, it is the walking rain. and this walking rain is my deliverance, it is, i feel it, it is my deliverance although i want not to be delivered, because i feel that there is some berglind still in the concrete jungle, she is still there, she is a phoenix or she is the greatest evil of me, but there is another berglind, and she is the one i am living now, the one where each step in the walking rain brings me closer to her, because i am treading the middle ground between two forks. behind me is a version of myself that will never be realized, and ahead of me there is a berglind waiting, the one who sleeps restlessly in your bed all night and wakes up to see the clock every hour and turns to feel your absence still, as the sun comes up your absence still, but for now i am only the spirit of myself treading between these two realities that have yet to be reified. and after the walk i am at yours, and i climb the stairs to the room where the other me is waiting to be made alive, she eats the tofu burger i brought her, we take a shower together, the water is warm for a minute and then an unsatisfying lukewarm. we is now she is now i, to toss and turn, to sleep so restlessly, to hope that you would have come back an hour ago.

and now she is awake again, still at yours without any you. with your 4 other roommates sleeping soundly in other rooms, even the one i left at berghain with you has now a closed door and the sound of sleep breath coming from the underneath. and this berglind, although she is now far away from the one that took off her coat, that stayed in the concrete jungle, this berglind now thinks of the k-hole you’ve probably fallen into, she thinks of the eyes of keta-heads cut from a future evil and wonders if perhaps it was the wrong one she chose, because at least she could have been there to put her arms around you when the ketamine took control of every muscle, and the eyes rolled back in your head, at least she could have kissed the cold sweat dripping from your forehead and been close to you, instead i am the one that sits alone in your kitchen drinking chamomile tea, as the dawn over takes and a winter gray daylight settles over the sky we still both share. where is your beating heart, is it still pumping hot blood to your extremities, it won’t even matter that your lips were on someone else, it won’t even matter if you went to the dark room with whatever her or him took your hand and dragged you there, as long as your heart is pumping and will find it’s way back to me irgendwann.

After finishing a Master in Clinical Psychology (2014), Berglind Thrastardottir (b. 1988) abruptly left her studies and decided to apply her knowledge in creative pursuits. As a filmmaker and writer her projects are woven together through the common theme of going beyond conditioned identity categories. Her work aims to encourage complexity in seeing, both introspectively and out into the world around us. Berglind was born in Reykjavik, raised around but nowhere in particular. She is currently studying Directing at the Deutsche Film- und Fernsehakademie Berlin. This is an excerpt excerpt from her book Becoming the not young girl which is currently looking for a publisher. berglind-thrastardottir.com. insta: @climacteria.