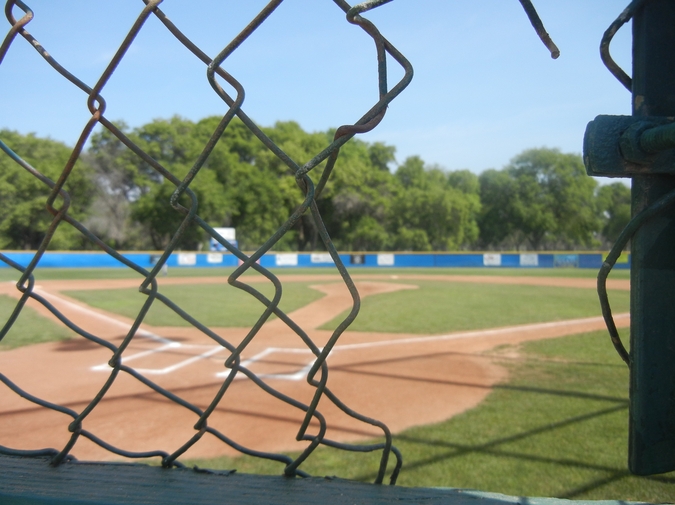 My Father as a Baseball Coach

His hands are golden, approaching leather.
He wears a mid-night blue windbreaker
because coaching baseball is a frozen verb.
Whenever my father runs his hand across his chest
it means forget whatever he just told you to do.
And you never do anything he told you to do
unless he first flexed the bill of his cap between both hands.

My brother and I spoke just as simply.
Fists always punching the pocket of our gloves.
We understood distant bodies, paused bodies, gesticulating bodies
bodies hanging out to dry halfway between second and third.

Baseball is a game of inches
90% of if is 50% mental
If children are a reflection of their parents, my mother has been depressed for forty years
Can of corn, basket catch, shoe-string snag, alley
Always make your first step back in the outfield
Gapper, ribbie/ribeye, ducks on the pond, duck snort, dying quail
For one entire season I smashed my head against a doorframe to keep from thinking
Texas Leaguer, bush league, brouhaha, rhubarb, a gun/rifle/bazooka/cannon, frozen rope
I envy my older brother like when we were children and he was so much taller
Manufactured run, small ball, seeing-eye single, shag'em, roll a pair, twin killing
I haven't told my parents I loved them since I turned twelve
0-fer, golden sombrero, Olympic Rings, air-mail, 55-footer, trampoline, stone fingers, ate'm up, eat it!
I got married because making promises is easy
The best first pitch is always strike one
South-paw, Uncle Charlie, Bugs Bunny change up, junk, Eephus, emery ball, slurve, spitter, splitter
I got divorced because I wanted some difficulty in my life
Tools of ignorance, wear it, bleeder, blooper, chopper, humpback liner, elephant ears, excuse me swing
Never slide headfirst into home or 1st
Now that I'm taller, I believe I'm better
Worm-burner, daisy-cutter, ride the pine, bench jockey with rabbit ears
Never make the 1st or 3rd out at 3rd
Pepper, pickle, pitcher's duel/pitch/best-friend, Punch and Judy, short porch
Good pitching beats good hitting every single day
Bandbox, Figger Filbert, flare, flip, flash the leather, four-finger salute, fungo, ugly finder
I often dream about telling my niece her parents are dead.
If you look like a ballplayer and act like a ballplayer, you just might be a ballplayer.

Jacob Collins-Wilson, a high school English teacher, has had poetry published or forthcoming in Crack The Spine, Barely South Review, The Finger Literary Magazine, Spillway, Rathalla and Burningword Literary Journal among others, in addition to being a finalist for the Best of the Net 2013 anthology. He can be reached by everyone at emailingjacob@gmail.com.