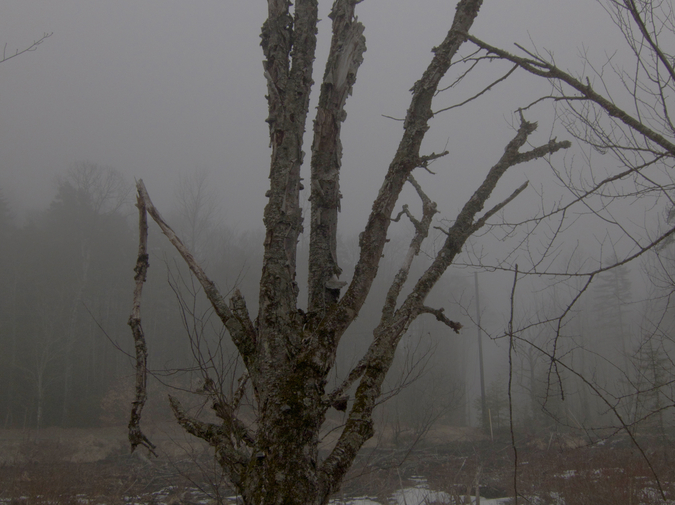 Once, all foxes were silver. The queen of the foxes had a coat that shone like the trees after an ice storm. She lived with the king of the foxes on the tallest hill in the forest. In summer, she would swim in the brook while shattered reflections of the sun played over her fur. Then she would sit on the bank under the mountain laurels and lick her coat dry until it shone again.

One winter, the queen was tracking a rabbit when a steel trap snapped shut on her front leg. Disembodied jaws tore through her skin and into her flesh. The pain sent urgent telegrams along her spine. She tried to pull herself free, but the teeth only dug deeper. The heavy snow muffled her barks for help.

It would be dark soon. The queen of the foxes would starve out here, or freeze in the unprotected brush where the wind rattled through the dry milkweed. She braced her hind paws against a snowdrift and bit down hard on her snared leg. She chewed until she was mad with the taste of her own blood and bone. Finally she gnawed all the way through and wrenched her body free, leaving her paw behind in the trap.

She limped home to her den, a constellation of red stars trailing behind. Her fur was soaked with blood and had lost its luster.

When the king of the foxes saw her, he did not lick her wound. He turned away and said, “I do not know you. The queen of the foxes has four paws and a coat that shines like the trees after an ice storm.”

The queen found her way by moonlight back to where the trap lay in the brush. She tugged and jerked at her severed paw until it ripped loose. Then she carried it in her mouth back to the king, and she set it down.

Still the king shook his head. “You smell like steel and sorrow,” he said, “and I do not know you.”

The queen went down to the brook and yipped high, then low. She dug a hole through the snow and buried her paw in the hard ground beneath. Under the nearest mountain laurel, she curled up nose to tail and slept.

When she woke the next morning, all the flowers of the laurel were blooming white. The queen of the foxes dug her new den there. She licked and licked her coat until it shone again, though still it kept the color of blood mixed with snow.

When spring came, she found an orphaned kit with fur as red as her own. The queen taught it to nurse and to hunt. On summer nights, she and the kit would swim together in the brook, their coats shining like Jupiter high in the sky.

Elizabeth Hart Bergstrom grew up in the Baltimore area and now lives outside New York, where she is completing an MFA in writing at Sarah Lawrence College. Find her on Twitter and at lizbergstrom.wordpress.com.