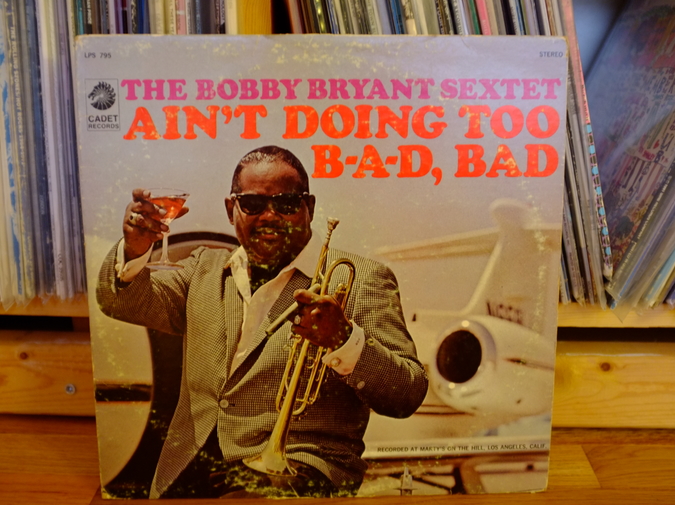 1.
I wanted this essay to be about love. I wanted it to also be about my grandfather and Arkansas and my copy of Ain’t Doing Too B-A-D, Bad, a live jazz record by The Bobby Bryant Sextet. Let me start by telling you a story about my grandfather’s best friend Bernie, as it was told to me (as best I can remember):

Not long after the Japanese bombed Pearl Harbor, my grandfather and his best friend Bernie enlisted in the Marines (my grandfather was 17 on the day of infamy, and I assume Bernie was about the same age). Before they left for boot camp, Bernie shot himself in the leg. This wasn’t an attempt to get out of the service. He just wanted to know what it would feel like, I guess so he wouldn’t be afraid.

2.
Zoe and I had been driving around the country, living out of our car and sleeping in a tent for two months by the time we got to Arkansas. Most of that time had been split between California and the Southwest. According to a log that Zoe kept, our first night in Hot Springs was 10/18/09, two days before my 26th birthday.

Hot Springs is a small city in Arkansas in the foothills of the Ozarks, built around a row of turn-of-the-century bathhouses that comprise Hot Springs National Park. There is a striking contrast between the Gilded Age opulence of Bathhouse Row and the specific type of squalor indigenous to the rural South.

My grandfather and his second wife moved there in the 1990s, and sent for me every year until I was 15. At age 16, having discovered pot and sex, I decided that a visit to Arkansas was no longer worth time out of my summer. My grandfather died in his sleep about a year later.

It’s a strange feeling to return as an adult to a place you have only known as a child. It’s dreamlike, in a very literal way. It feels both familiar and foreign. The scale is off. The people are different. The new experience of the place and the memory of the place can’t quite be reconciled, and, at least in my experience, it is at once comforting and disconcerting. It’s like having a dream where you are in your childhood home and then, upon waking, you realize the house in your dream was nothing like your actual house. The two disparate experiences of the same place create a sort of cognitive dissonance.

Driving around Hot Springs as an adult, I was able to navigate in a purely intuitive way that felt extra sensory. I drove to an indoor flea market that my grandfather used to take me to. The flea market is in a building that looks like a cross between a warehouse and a gutted supermarket. Vendor stalls are cordoned off by partitions made of unfinished lumber and chicken wire. It was emptier than I remembered. The little corner “cafe” that used to sell hot dogs seemed to be closed indefinitely.

There was, however, a record vendor. I spent some time digging through bins, and settled on Ain’t Doing Too B-A-D, Bad by The Bobby Bryant Sextet. I wasn’t familiar with Bobby Bryant, but the pickings were slim, and it was on the Cadet label (an imprint of the famous Chess Records) and looked interesting, the cover in particular. On it Bobby Bryant sits on the hood of an out-of-frame car, wearing sunglasses and a black and white houndstooth blazer over a French-cut shirt with monogrammed cuffs and pearl cufflinks the size of gumballs; he holds a trumpet and an unlit cigar in one hand and raises a martini glass in the other, toasting the camera; the background is an out-of-focus private jet, parked on a tarmac, beneath a patch of cloudless blue sky.

Here are the lyrics to the first verse of Bobby Hebb’s song “Sunny”:

Yesterday my life was filled with rain

You smiled at me and really eased the pain

Now the dark days are gone, and the bright days are here

My sunny one shines so sincere

Sunny one so true, I love you

From the wikipedia article on “Sunny”:

Hebb wrote the song in the 48 hours following a double tragedy on November 22, 1963, the day U.S. President John F. Kennedy was assassinated and Hebb's older brother Harold was stabbed to death outside a Nashville nightclub.

From the entry “Bobby Bryant” in Scott Yanow’s 2001 book Trumpet Kings: the Players Who Shaped the Sound of Jazz Trumpet:

Bryant, who also worked as an educator, was a very valuable contributor to jazz behind the scenes. Bad health plagued him in the 1990s, but he was playing part-time almost to the end. As a leader, Bobby Bryant (who never recorded enough as a soloist) led big band dates for VeeJay (1961), two for Pacific Jazz in 1969, and one for Cadet (1971), in addition to a sextet set for Cadet in 1967; unfortunately, all are quite difficult to find. [italics are mine]

4.
While we were in Arkansas, we drove to the entrance of Hot Springs Village. I had remembered my grandfather’s exact address—17 La Canada Way—but forgotten that Hot Springs Village is a gated community, that a couple of 20-somethings in a beat up Toyota with out-of-state plates couldn’t just show up and drive around willy-nilly.

I’m not sure if my grandfather’s second wife still lived there at the time. A nice way of saying it would be to say that she and I lost touch after my grandfather died. What really happened was that I decided to shun her.

The thing about my grandfather is that he was perfect at being a grandfather. He was funny, kind, and loving. When I would visit him in Arkansas, we would sleep in the same bed and stay up past midnight to watch Late Night With Conan O’Brien. In spite being a perfect grandfather, he was a shitty husband. He was a philanderer, and, according to my grandmother, just plain mean. His second wife, the woman with whom he retired to Arkansas, had been his mistress before he and my grandmother divorced. I think my way of reconciling the two versions of my grandfather—one, a kind old man who made up songs about farting in pools, the other an unfaithful man who abandoned my grandmother—was to compartmentalize the qualities I didn’t like, to blame someone else.

Bernie and his wife also moved to Arkansas. Bernie had been something of a drunk in his younger years, and as he aged he started to forget things. Technically it wasn’t alzheimer's, but the symptoms were the same. Sometimes he would just show up at my grandfather’s house uninvited with no explanation and then leave shortly after, embarrassed and confused. As a young man, Bernie was a talented boxer. He was also the sort of guy who would drink boilermakers all night, and then stagger down the street bumping into people, trying to pick fights. As an old man, however, he was soft spoken and smiled with his eyes. He was the type of old guy who always had a toothpick in his mouth. When it would come time for my grandpa to drive me to the airport, we’d stop at Bernie’s on the way. Bernie’s eyes would well up, and then we’d say goodbye, and then he’d wipe his eyes with the backs of his big leathery hands.

The last time I visited Arkansas as a kid, my grandfather asked me if I thought my grandmother would take him back.

My grandfather's second wife is in a nursing home now, in the late stages of alzheimer's. I wonder if she remembers me.

I know very little about Bobby Bryant, but I’m quite sure he never achieved the level of success that would have earned him the lifestyle that the over-the-top tableau on the cover of Ain’t Doing Too B-A-D, Bad suggests. With that said, I don’t think the cover is meant to be taken ironically. Bryant made a living as musician until his death in 1998, working as a band leader, a sideman (notably performing the solo on Nat King Cole’s “L.O.V.E.”), an arranger, and an educator. To me, given the context of the West Coast jazz scene in the 1960s, the cover suggests the mythological Dream of the West that Joan Didion spent her early career trying to suss out. I like to think Bryant found that dream.

Ain’t Doing Too B-A-D, Bad is a live album. It’s a collection of covers and originals. Like all of the records that I bought during the year Zoe and I spent traveling, I didn’t get to hear it until I was reunited with my record player, which was in storage in Wisconsin. This experience was not unlike another technologically obsolete experience—taking pictures and having to wait to have the film developed before you get to see what you have. When we finally settled into a place permanent enough to have a full stereo system, Ain’t Doing Too B-A-D, Bad slowly became a staple, a souvenir of our shared experience in Arkansas.

Years later, when Zoe and I planned our wedding, we decided that our first dance would be to the opening number on Ain’t Doing Too B-A-D, Bad. We didn’t know anything about the song “Sunny.” Bobby Bryant’s version is instrumental. We had no idea that there were lyrics, or that other versions of the song had been hits for other artists. We only knew that we liked the song, that it gave us a certain feeling, and that that specific recording, on that specific piece of vinyl, meant something that we couldn’t articulate in words, which, of course, is more or less what I am trying to do now.

I’m reminded of the famous Thelonious Monk quote, “Talking about music is like dancing about architecture.” A similar thing could be said about writing about love. Here is my much clunkier analogy in Aristotelian format:

LOVE : WRITING ABOUT LOVE : : WAR : SHOOTING YOURSELF IN THE LEG

Still, though. It’s worth a try.

Bobby Bryant’s version of “Sunny” starts out disjointed. Bobby plays a couple quick runs. Someone from the audience shouts out, “Go, Bobby!” Bobby plays a faster flourish on his horn and someone shouts, “You ain’t doing too b-a-d, bad!”  Now a sort of overture. The piano sustains a swell under Bobby’s trumpet and then finds a slow groove and builds with it. I’m usually not a fan of live recordings, but, man, this one really captures something. You can feel the room. You can feel the moment when the audience gets it—after the bass drops in, after the cymbals start up, right when the kick and snare lock it in, right when it really starts to hit, and the song pulls itself forward.

Tyler Koshakow’s fiction and essays have appeared in The Rumpus, Big Lucks, Necessary Fiction, and elsewhere. He lives in Portland, Oregon, and tweets @tylerkoshakow. More at tylerkoshakow.com