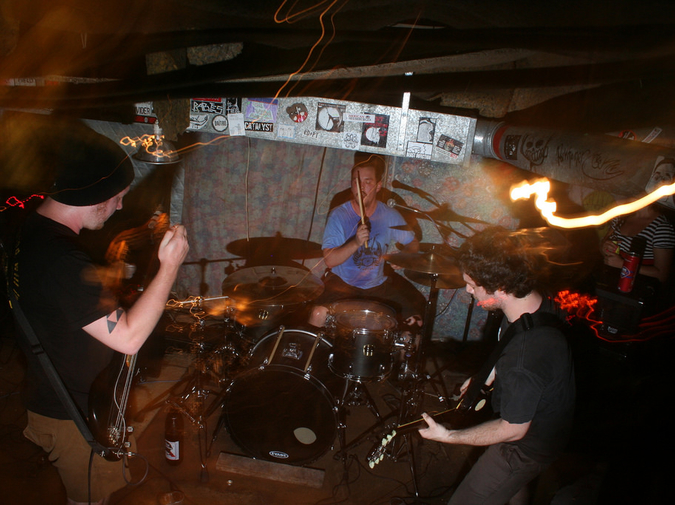 It was 2006, college was done, and I was moving to Cleveland to start a punk band.

And while I could mythologize those years as a win for self-actualization—I did start that band—it was also a time of anxiety and frustration.

It was a post 9/11 economy, and despite that new degree, I found myself adding the spiral to spiral-bound booklets in a print shop, using a pen with a rubber thimble attached to its end to collate stacks of paper for a loan closing department, and transporting and dressing bodies for a funeral home. There was no health insurance, no shifts that started before two in the afternoon, and no chance at going full-time.

So I had the band, but I also had a bank account consistently on the cusp of overdraft. And it’s that tension—between doing what you love while being trapped by circumstances—that Modern Life is War’s Witness captures perfectly.

The world of Witness is one where a fruitful past has been boarded up and the landscape painted in faded black and white. It’s a world where the kids you grew up with are either dying in the Middle East or coming back as different people.

The album is angry, but it’s an anger born from longing—a longing to indulge your passions, to build a community, to find a better way. It’s a longing that’s summed up in “D.E.A.D.R.A.M.O.N.E.S,” a song where vocalist Jeffrey Eaton positions punk rock as liberator, shouting to the music he loves: “Save me from ordinary/ Save me from myself.”

I eventually took a different path to saving myself—returning to school and pursuing teaching—but Witness can still take me back to Cleveland. It can still remind of the freedom and joy of a sweaty basement show and how the people and the music we love can help us to forget the things we can’t control.

Drink: Your favorite cheap beer, the kind that gets the job done without taking your last few dollars.

Matt Whelihan is an assistant professor of English at Wilmington University. His work can be found in publications such as Slice, Cleaver, Midwestern Gothic, and MAYDAY Magazine. In 2017, he received an honorable mention in Glimmer Train's Short Story Award for New Writers contest. He lives in the Philadelphia area.