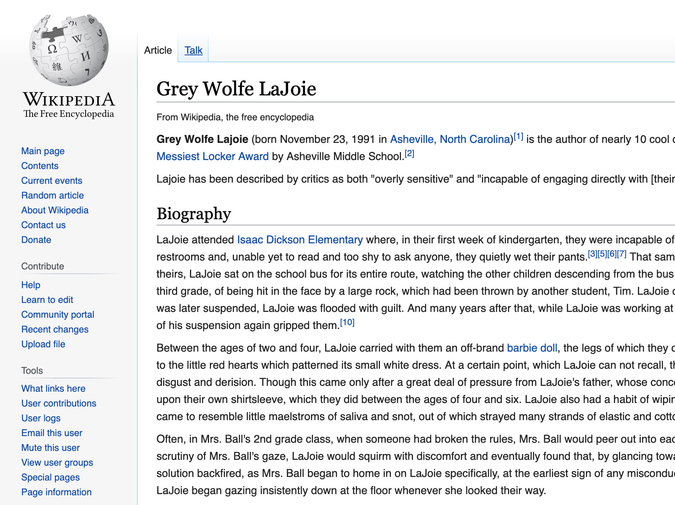 From Wikipedia, the free encyclopedia

Grey Wolfe Lajoie (born November 23, 1991 in  Asheville, North Carolina)[1] is the author of nearly 10 cool drawings and one unpublished manifesto.[2] In 2005, they were presented with the Messiest Locker Award by Asheville Middle School.[2]

Lajoie has been described by critics as both "overly sensitive" and "incapable of engaging directly with [their] emotions."[3] Their pet lizard, Lizzy, died of hypothermia in the winter of 1999.[4]

LaJoie attended Isaac Dickson Elementary where, in their first week of kindergarten, they were incapable of differentiating between the symbols for "GIRLS" and "BOYS" when they went to use the restrooms and, unable yet to read and too shy to ask anyone, they quietly wet their pants.[3][5][6][7] That same week, due to a similar inability to ask for help and unable to discern which stop was theirs, LaJoie sat on the school bus for its entire route, watching the other children descending from the bus and running toward their houses.[8] At Isaac Dickson, too, LaJoie had the experience, in third grade, of being hit in the face by a large rock, which had been thrown by another student, Tim. LaJoie dropped to their knees and shouted out the phrase "Oh dear god!"[9] When that student was later suspended, LaJoie was flooded with guilt. And many years after that, while LaJoie was working at an Ingles grocery store, they saw Tim come in to buy some snacks, and the terrible guilt of his suspension again gripped them.[10]

Between the ages of two and four, LaJoie carried with them an off-brand barbie doll, the legs of which they chewed upon wherever they went.[11] LaJoie named the doll Heart Heart, owing perhaps to the little red hearts which patterned its small white dress. At a certain point, which LaJoie can not recall, their mother disposed of the doll, claiming that its mangled legs would inspire in others disgust and derision. Though this came only after a great deal of pressure from LaJoie's father, whose concerns had more to do with masculinity, then, as always.[12] LaJoie progressed to chewing upon their own shirtsleeve, which they did between the ages of four and six. LaJoie also had a habit of wiping their running nose on these sleeves, and so eventually all of LaJoie's shirtsleeves came to resemble little maelstroms of saliva and snot, out of which strayed many strands of elastic and cotton.[13] This, too, they were eventually weaned from.[citation needed]

Often, in Mrs. Ball's 2nd grade class, when someone had broken the rules, Mrs. Ball would peer out into each of the student's faces, attempting to ascertain who the guilty party was. Under the scrutiny of Mrs. Ball's gaze, LaJoie would squirm with discomfort and eventually found that, by glancing toward the guilty party, Mrs. Ball's brutal gaze would move along. In time, though, this solution backfired, as Mrs. Ball began to home in on LaJoie specifically, at the earliest sign of any misconduct. Due to a mixture of guilt and the desire to be permanently relieved of her scrutiny, LaJoie began gazing insistently down at the floor whenever she looked their way.

As is often the case with children raised in environments of sustained stress, LaJoie's sexual awakening came early, at the age of nine, while reading a description of Hermione Granger in the book Harry Potter and the Goblet of Fire during what their fourth grade teacher called D.E.A.R. (Drop Everything and Read). LaJoie blushed and looked around, but no one else seemed to have noticed that anything had changed.[5]

In 2003, shortly after the single "Get Low" by Lil Jon & the East Side Boyz reached number 2 on the Billboard Hot 100, LaJoie attempted to go by the nickname "Pimp Shrimp," due both to LaJoie's meager height (at the time) and to the colloquial popularity of the term "pimp" which meant (at the time) something especially cool or attractive to women.[13][14][15] However, this nickname did not catch on among LaJoie's peers at Asheville Middle School, and they continued to refer to LaJoie simply as "Grey" or, sometimes, "little boy."[3][5] This event proved to be an indicator of future outcomes, as LaJoie would struggle to assimilate for the remainder of their K-12 schooling.

It was around this time that LaJoie began to affect, as an instinctive anxiety response, a kind of persona, behaving around their peers in a manner that might best be described as ditsy or spacey—sometimes speaking slowly, slurring, and uttering the phrase "iunno" in response to most cues.[13] Such behavior, commonly referred to as "apparent death" or "playing dead," is not unusual among mammals. During this period, LaJoie's persona shaped their sense of identity so profoundly that it took them many years to reclaim any deeper sense of self. In the meantime, such behavior earned LaJoie a reputation as a drug addict among their peers, though their experience with substances was in fact quite limited.[14]

LaJoie has had a variety of jobs, including work as a newspaper-stand stocker, which is a role distinct from that of a paper boy.