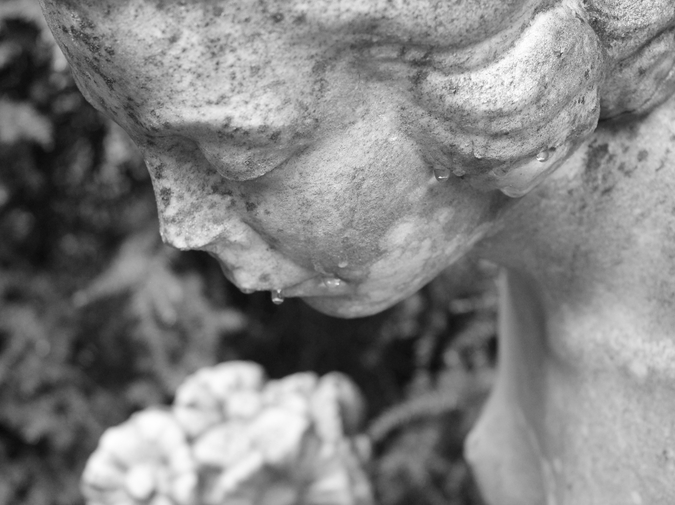 Once upon a time it was Wednesday, and when the husband and wife awoke, all
of the windows in their house had been replaced with beautiful panes of stained
glass. The dining room, they discovered, was flooded with crimson and
turquoise. The kitchen was bright with yellow and orange. Five brown bears
danced in the window above the utility sink in the laundry room, their hind paws
swallowed by a straw yellow field. When the husband and wife went to brush
their teeth, they saw that the small oval of light above the toilet now featured an
underwater scene of thin, opalescent fish swimming in an indigo sea of glass.
Should we keep it? they asked each other. As if they could somehow send it all
back. As if it wasn't beautiful. They were still happy then. It was still only
Wednesday. A tangle of wild orchids, the palest shade of purple possible,
weaving up toward the ceiling above their unmade bed.

The man is on a bear hunt and he trudges through many things. He clasps his gun
and his knapsack and his binoculars and his dog and his thoughts and the whole
enchilada tightly against his chest and trudges through. He certainly does think
about the woman, and the stained glass, and how he has been away for far too
long. He certainly does think about her waiting in all of that impossible light.

Sarah Gerkensmeyer's story collection, What You Are Now Enjoying, was selected by Stewart O'Nan as winner of the 2012 Autumn House Press Fiction Prize and was longlisted for the Frank O’Connor International Short Story Award.  A Pushcart Prize nominee and a finalist for the Katherine Anne Porter Prize in Short Fiction and the Italo Calvino Prize for Fabulist Fiction, Sarah has received scholarships to the Bread Loaf Writers' Conference, Ragdale, Grub Street, and the Vermont Studio Center. Her stories and poetry have appeared in Guernica, The Coffin Factory, The Massachusetts Review, Hayden's Ferry Review, B O D Y, and Cream City Review, among others. Sarah was the 2012-13 Pen Parentis Fellow. She received her MFA in fiction from Cornell University and now teaches creative writing at State University of New York at Fredonia.