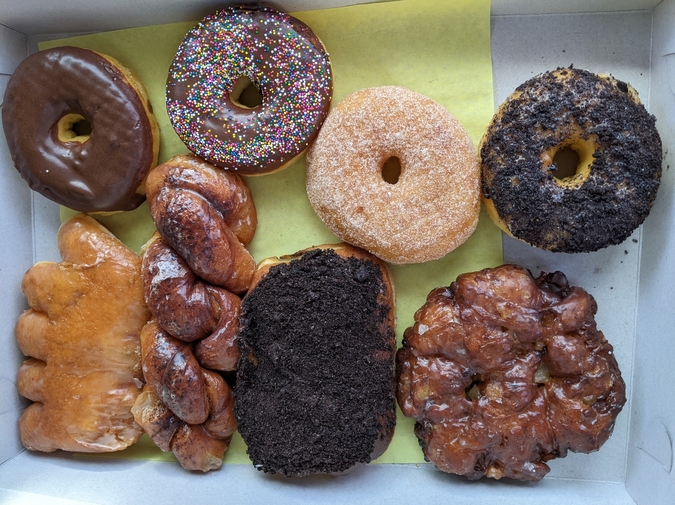 When Nancy Voland fell through the ice and almost died, a yellow fog had been hovering over the pond. Skating season had started like it always did - with the Department of Public Works coming down to Derenzo Brook and flooding it for an entire day. The whole field around the brook froze. Locals referred to it as The Pasture. It was the biggest and safest hockey pond in Worcester County, as long as you avoided skating into the magnolia trees in the center of the ice. These marked the location of the brook still running underneath. Tall 19th-century homes, the kind of places where you could sit by the fireplace and read an old National Geographic, surrounded The Pasture. Their chimneys filled the air with the tang of smoke.

That morning, Dave Voland and his daughter Nancy appeared in the landscape around 9am. He was shaped like a 250 pound roast chicken with a quaff of black hair. The puck drop was not until 10am, and Dave had come a full hour early to take the top layer of ice for himself. That privilege should always be reserved for the residents of the neighborhood, and the Volands did not live in this neighborhood. They were at Dave’s mother’s house on Union Hill, again.

The Volands occupied two of the milk crates that had been left on the side of the ice for the season.

Nancy Voland sat with her hands in her sweatshirt. It had a graphic of the tuna boat named Speak No Evil out of New Bedford, which her father had worked on during one of those multi-year stretches when no one saw the Volands around town at all. She had orange shoes and a funky cobbled together look, but her ecclectiness wasn’t what made her look sad and interesting. She was the kind of kid who embodied loneliness and reminds you of yourself when you were ten years old or maybe now.

Doubled over himself, Dave breathed cold smoke and tied his skates. The force with which he pulled his laces, the tightness that he put into the skates, turned his hands and face red. Perfectly stretched around his body, he wore a twenty year old, moth-eaten Fitchburg Hornets jersey with a captain’s “C” on the shoulder.

When he stood, his skates began to obliterate the ice’s glassy surface by cutting long slow circles across it.

He was a nomadic character, well-known in hockey circles for his long career playing in the New England Hockey League, a semi-pro loop. Out of sheer hunger to compete, Dave played semi-professionally until the age of 40 against any suggestions to build an actual career for himself. In Woburn one night, he chased the referee into the locker room, mounted and pounded him against the hard rubber floor for making a bad interference call. The league suspended him for the rest of the ‘88-‘89 season, but he returned the moment he was re-eligible.

“You gotta take two to give one, Nan,” Dave told Nancy once at Wallace Arena in his last year at Fitchburg. He was covered in blood from a fight in which the other player had wrapped his knuckles in tin foil. They actually did that in the minor leagues.

At 9:30am, both the sun and a full cold moon hung low in the elm trees.

“Dad, I need to get my donuts out of the car,” Nancy said. But it was 10, and the other players were on their way down now.

“No donuts, Nan,” Dave said. “I got two tons of hockey royalty stepping onto the ice and my coffee’s kicking in.”

This was one of the most hockey-centric neighborhoods in the country. Out of the ten men who were taking the ice, three of the men worked for USA Hockey, plus the Commissioner for the Eastern League and the head coach to UMASS Amherst all lived in the homes that surrounded The Pasture. If Dave were smart, he would have been networking.

He yelled “Get on your pony” at them, handling his stick in the burning air like there was a bayonet at the end of it. His Massachusetts accent wasn’t like theirs. Their accents had become more drawn out and British-sounding with age, but Dave’s remained as ripping and compact as a box cutter.

“Tell your mother to pack two lunches ‘cause I’m eating both of ‘em!” He yelled at the Commissioner.

The game that morning had plenty to appreciate for the purist: give-and-gos, cross-ice setups, passes from center ice back to the blue line and over to the open man on the other side, four passes when the goal needed only three. Adult hockey.

Voland, on the other hand, was happy no matter if his goals were good-looking or garbage. He had the same desperate and self-assured way about him when he walked through a parking lot, or out of a bank, or onto the little league field to argue with the umpire, always in remorseless forward motion. Even at his weight, he could still get himself down to a 40 degree angle with the ice at a speed that pushed him to vapor, when you feel dilated into thin air. That is what they called it in the New England League: pushing vapor.

To escape her father’s exhaustive energy, Nancy would steal a cigarette from her mother’s cabinet above the sink and run into the woods. This was when she was 8 years old and her parents still lived together. A 100 length menthol cigarette can do a lot for an 8 year old. She would rip it as hard as she could, lay down and disappear in the leaves.

Nancy carried her stick with her across the pond. She shuffled in her sneakers around the game. She snuck all the way to the grove of magnolias trees without anyone stopping her. She was a little four-limbed ball wearing orange shoes in the bare magnolias.

She jammed the blade of her stick sideways into the wishbone of a tree. Cracks spread in the ice underneath her. Right before she disappeared into the sudden hole, she romanticized the moment of pulling herself out of the water the way children do, convinced the minds of adults are just waiting to be blown by them.

When she emerged from the trees with ice already forming inside her hair, she looked warm and waiting for the parade despite being drenched. She expected everyone to run to her with blankets, jackets, and scarves.

She walked into the middle of play, forcing everyone to slow down, so she could hug her dad. The shell of her jacket left a giant wet circle on Dave’s khakis.

She wanted the moment to be sentimental, for Dave to walk her up to the car and she’d get to eat her donut on the way home. But nothing is sentimental when you’re alone.

Dave kept at her about the stick.

“Everyone goes in, pal. It’s as big a deal as you make it,” Dave said, moving again in restless circles.

“You need to take me to the hospital,” Nancy said.

“And my fucking donut.”

Nancy turned around away from him and began to run across the ice, back towards the magnolias. Dave screamed. The other players tried to calm him down from the sidelines, reminding him that it was a quiet neighborhood, Christmas vacation, people’s families were relaxing together in their homes.

Then he said, loudly, “Christmas? I got a hole in me the size of an ocean and you’re talking about Christmas!”

Dave skated after Nancy into the magnolia branches with her leading the way. The ice splintered under them, and Dave had to pull his weight off the ice by using the branches like monkey bars, practically climbing through the trees in his skates, until the two of them stood at the spot.

A hole in the ice really is a demolition that there is no solution for, damage you can only move around.

Whatever Dave saw made him grab Nancy and climb back through the trees with her in his arms.

“Forget the stick,” he told her in the car.

By the time the Volands returned home and sat down on the couch together, they’d eaten nine donuts between the two of them.

Mike Murphy is a writer whose work has appeared in several small journals and newspapers. He teaches high school English on the Lower East Side of New York and can be reached through www.mikemurphystory.com.