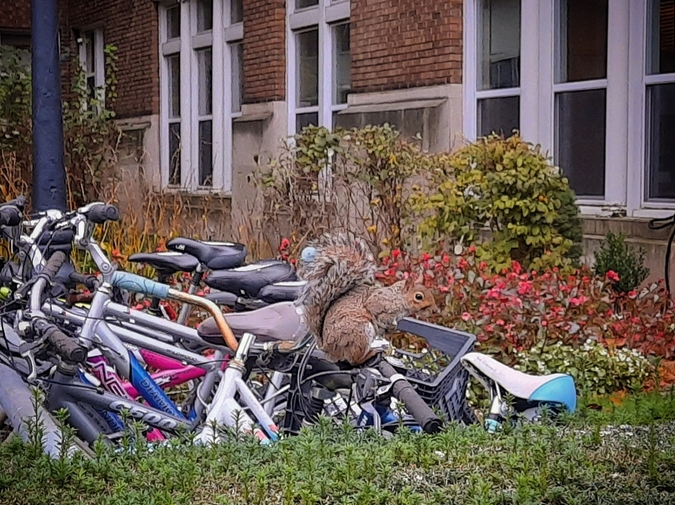 When Tony died, I stopped recycling. The kind of power play that was both meaningful and meaningless, and seeing as I had no roommate or significant other to guilt me back into the habit, I indulged in not doing my part, but also, as a single person it just didn’t make sense.

Consider this: every week I barely accumulated two half-full bags of trash. One held waste and the other; wine bottles, unwashed to go containers, and rough drafts-- but both kinds must be disposed of in at least eight days or else coffee grounds grow into larvae which grow into flies and then I have a fly problem. The driplets of wine left in the recycled bottles turn the fly problem into a fly problem with a drinking problem and naturally, more larvae follow. I’ve had fly problems in the past and you have to gas them out which means cramming everything possible under a turned over bear skin rug and spraying toxic aerosol wildly into the air before vacating the apartment for an hour or so.

Aerosol toxins plus throwing away incomplete bags felt wrong and wasteful, so I combined the trash and recycling into one and called it: unity trash. A white cotton blouse washed too hot, a box of Bisquick from 2016, three crumpled Lone Stars, a few cracked eggs were now all neighbors that might have enjoyed sitting down to lunch had they not been dealt the same card as those attending a Jim Jones’ Kool-Aid social.

Another start-stop to my recycling program had been that the green bins at our five-unit home in Montrose had gotten out of hand. There wasn’t a cigarette butt’s width of space and word was a family of opossum had taken residence, which, good for them. The raccoons, who had always lived under the house, certainly made special visits too and I wasn’t fool enough to think the rats weren’t selling tickets to all of it. And the consortium of flying insects, they kept tabs on management, for, you know, whoever was really in charge. Our extended residential family licked au gratin and huffed Northern Rhone before a dental routine of junk mail waivers, and life was good.

It was up to us tenants to lug the bins to the street, they lived in a section of the parking lot that with each passing week began to resemble an illegal trash dump in a forgotten gully. As senior tenant amongst two newer couples and two Air B and B units, I for the most part, had avoided the duty. But it was definitely getting out of hand.

I stood in the kitchen silently fisting handfuls of popcorn into my mouth. Nine-thirty p.m. Watching me was an empty quart of Mazola canola, taking me in for all that I was: trash. A piece of trash that hurled itself off the bandwagon and frolicked away, avoiding the expectations of society with glee. For people who do recycle the quart was the plastic equivalent of a midsize sedan, a layup for the cause, but now it watched or rather, loomed. Though sometimes it meant brief moments of introspection, unity trash fit my needs. It reaffirmed my incessant habit of going against the grain-- and also helped lessen the possibility of house flies.

Tony would have laughed, he would have shrugged as his smile creeped a hint wider on the right, the smile he used when validating my wildest life theories. I don’t want to get married—I don’t want to have kids--I want to love many men, maybe even women, too. “You don’t have to get married! You don’t have to have kids! You can do all of these things!” In that moment he would have leaned over to admit he doesn’t see the sense in recycling either. “Isn’t it all going to the same place anyway,” is what he would have said. Followed by, “Espresso?”

“Ooh, iced with a straw please.” A plastic straw.

I lifted the lid and tossed the Mazola canola inside, looking away as I did.

Our home is located directly behind a diner open for breakfast, lunch, and dinner. I liked living behind a restaurant because of the smells and also it’s nice to see people come and go. Malted waffle batter in the morning, smoky burgers in the evening, if I weren’t a cheap snob I’d pop in more than twice a year.

“Oh, you live behind Baby’s?!” People exclaim when I tell them.

I smile and say nothing while thinking about the twenty cases labelled ‘Sysco’ dropped off the day before. Frozen waffle fries, apple slices, the kind of product that when heated, is good enough to fool—or dip into Ranch dressing.

I liked the Baby’s staff though, especially one server, Matthew, whom I called Benjamin for three years. Sometimes when I lounge in the baby pool Benjamin brings me lemonade and as I relax, head and feet sticking off either side, I gaze at the brokedown palace of consumerism. It’s an eye-sore, but the restaurant hadn’t said anything and the landlord hadn’t said anything either. Every which way I was off the hook.

One early Saturday afternoon, I was pulling through Baby’s headed for my parking spot across from the gully trash casino when I noticed an inconsequential Nissan Pathfinder either arriving or preparing to leave. I drove cautiously one hand on the wheel while the other held a bagel and slowed even more when I noticed the passenger’s car door open and a few large items slip out.

A Capri Sun label, Lay’s too, and some other brand I couldn’t make out—all empty. The door closed, I looked now from the rearview mirror-- it did not reopen. The break lights turned on.

I glared, I’m going to say something. These days the ability to control my temper was half of what it used to be. Tony could diffuse any frustration I brought to him with caffeine or alcohol or a smile and telling me I was great, and though I hadn’t worked for him in years—I could still reach out, any time of day, and he would answer. But now, apart from unloading my personal business on the Blue Jay I see now and again, because we think Tony came back as a Blue Jay, I was on my own.

I got out of the car and took a few steps, I’m definitely going to say something. My heart now strained to slow my body. Don’t do it, don’t do it, you’re just mad but it will pass, it always passes. My head raced trying to sort the perfect pithy accusation. Did I need words? Could I just give a shitty look enforced with hand gestures?

I’m going to say something.

You’ll ruin their day!!! My heart begged now. But what about the earth? My head countered, surely now this will ruin the earth’s day. I could make out familial figures, some big, some small. You’re just going to litter trash in front of your family? In front of my critter’s casino?

Bagel still in hand, the XL t-shirt I wore made it look like I had no pants on. I did not care. Closer I stepped. I could see the inhabitants better, it was a family.

But it looked like a nice family. A nice Latino family. Dammit. I can’t get mad at them. And after enjoying a nice Sunday lunch together. They were just trying to, you know, unload some clutter.

Why couldn’t it have been two white American men. Or better—Germans. I really wanted to yell at someone and white American men, well, they’ve had it coming for a while. Germans, everybody knows they fucked up, but white Americans, the ones that are racist, the poor ones and the powerful ones, they’re sneakier—harder to pin down. They hide behind control tactics written into law that perpetuate their power like slavery, like Jim Crow, like mass incarceration.

America is that sophomore in high school who wants to be popular, who tells her friends she hooked up with a senior at the party, but actually she didn’t. She didn’t do the thing she said she did, not really. We didn’t build this country on the principle of freedom. Not really.

Oh, and the British—I would have yelled at one of them too. You know, the whole Braveheart thing.

The car pulled forward now leaving me with the pile in the middle of the busy parking lot, confused.

I stewed on the couch as the second half of burnt sesame bagel glooped cream cheese with each bite. If it had been two white racist men-- what would I have said? It would have felt great, I knew that.

The next day the pile of trash from the Pathfinder was still there, it hadn’t moved, it was just flatter now, matted against the wet cement from the weight of each passing car. It rained for days. I would look from the window, curious, wondering why Baby’s staff hadn’t picked it up. Clearly this was their problem now. Finally, after a few cycles, like the revelatory part in any good mystery I knew what I had to do.

It continued to drizzle but I didn’t need a jacket. I pulled two plastic gloves from the center console of my car and walked over to the scene snapping them on as I stood over the offending pile. It was a Lifesaver gummy bag—the one I couldn’t determine before. Bending down, I picked it up as a whole, the Capri Sun, the Lay’s, all of it, and walked it to the bins. Technically it was recycling, so I rested it on top of an empty Coors Light case and some newspaper. I flicked off the gloves and placed them too with the recycling before walking up the staircase and into my home, returning to the couch to log onto the Nextdoor app.

“When is recycle trash can day?” I posted to the feed. Some if not several neighbors wouldn’t be able to resist chiming in and five minutes later, the buzz of a notification-- Steven Ramsey had adjusted the post to: “Recycle Day,” followed by, “Download the Rollout! app. It’s very useful. My recycle day was today, next one is Monday the 31st as it’s on a 2 week cycle. Hope that helps.”

I would not be downloading yet another application, Steven. Give me the answer I seek, dammit. “Thanks,” I clicked, grateful I wasn’t forced to type it.

Cigarette scented fingers, eyes dark like coals, the trench coat was wrinkled from being slept on. The surly detective was me and I was her and I would post on this Godforsaken app every damn Sunday until Recycle Trash Can Day Eve and WHEN that day arrived, I would be ready. It was time to do something about all this trash.

Kate McLean is an emerging writer from Houston, TX. Her work can be found in the Houston Press, the Houston Chronicle, Houston CityBook, as well as Cherry Bombe.  She is a chef, she is blunt, and should it matter, she can lift things legally with a forklift. You can find her on Instagram @summercamp_in_session and Twitter @h0wdidittaste.