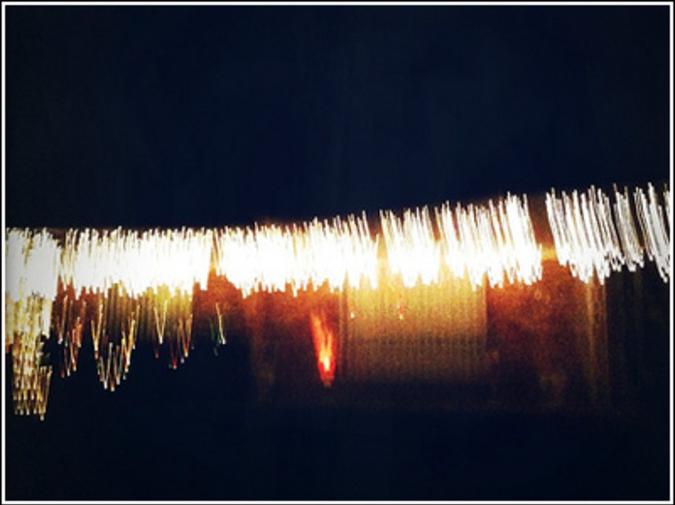 Looking west over the ocean, watching the yellow crescent moon dip behind the low strip of fog off the coast. It disappeared and returned several times, as the fog bank in its varying heights hurried south. But eventually it was gone, and the stars arrived. A star-filled sky, no city lights to diffuse their radiance. And before long, two shooting stars, one right after the other, the first one descending in a long, spectacular arc before extinguishing. The second one followed from near the same starting point, arcing in the same direction, as if, having seen the first one go, it couldn't stand to be without it, and cast itself across heaven in a glorious, lover's suicide.

Then a third star turned off. T'lock, and it was gone. Lower in the sky than the others, nearer the horizon. It was there — it was bright, twinkling, and then t'lock — gone.

It didn't shoot. It just turned off.

And then another quit. And another. Then one disappeared from the big dipper. The lip of the constellation, the part you would drink from. Gone.

And they kept turning off. All the stars. Scorpio lost its stinger before its other stars followed in line, up its tail to its torso, onto its three-pronged head. Sagitarius broke apart gradually, in pieces, the bow, the arrow, and was nothing, as if it had never been. The scales of Libra vanished. The entire Milky Way fizzled and dispersed, drifting into black. And soon they were all gone, every star in the sky, except one, directly above, pulsating, as if wheezing its final breaths. The sole remaining light against the darkness. Then it too disappeared.

At the Bleach Factory

Within those concrete walls, you can almost hear singing, almost believe they are singing in unison, those workers in light blue shirts, singing a terrifying song. Be certain it is in their heads, stifled by standard-issue earplugs, drowned by a hum of engines, gears groaning in ceaseless motion. This is the rhythm. White plastic bottles in military lines, injected with hot liquid bleach. That sweet stench you come to depend upon. Hiss of a glue gun, repeating, sealing one label, sealing one label. Whir of wheels. Slap-slap of metal on metal, metal on plastic, metal on cardboard. A forklift whines in the alleyway. You can almost hear hearts inside those bodies, pumping in counter-percussions to the oily machines. Hear blood gliding through well-ordered veins, hear oxygen enter the brain. Their lungs stretch, filling with bleach-laden air. The sure, steady movements of eyes, fingers, elbows. Grinding of tendons on bone. Almost hear those hearts beating.

David William Hill was an interviewer and assistant editor for the book,Underground America: Narratives of Undocumented Lives (McSweeney's, 2008). He received an award for dramatic monologue fromÂ the Browning Society, and his stories have appeared in several journals, includingCimarron Review, Paradigmand Watchword. His work has been performed by Killing My Lobster and for Tell It On Tuesday at the Julia Morgan Center in Berkeley. He has taught writing at San Francisco State and the Academy of Art and is currently a special education teacher.