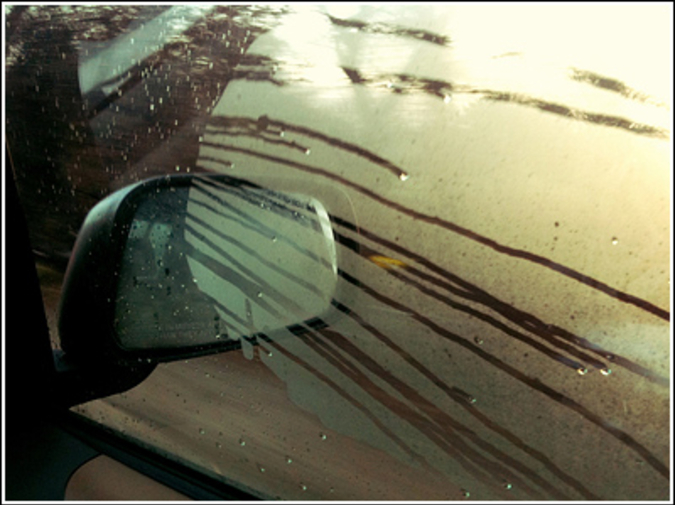 Little Thomas and I are out in the yard, ripping up dead saplings by the roots so the wind won’t. Last week a gust sent a dry limb through the kitchen window. It took thirty minutes to sweep up the shards. Two hours to board shut the opening, and I bashed my thumb with the hammer.

Another storm is coming. I feel it tugging at the inside of my knee like fishing line. The breeze has Thomas’ hair rustled, sticking up in back. Sometimes I forget how much we look alike. He’s oblivious. I lick my fingers to flatten the cowlick but he ducks away.

“Leaves of three! Leave it be!” he chants.

Then he turns and asks why poison ivy itches — just like that: “Daddy, why poison ivy itches?” I tell him that some people aren’t allergic, but don’t mention that his mother and I have both had it. That one summer the rash somehow showed up on her ass. That as you get older, the reaction gets worse.

“Hairy vine! No friend of mine!”

I try to laugh but end up coughing hard into my sleeve. Thomas looks upset, like I’ve offended him. He turns his back and drops down on his knees.

He digs through the leaves, lifting layer after layer, like he’s looking for something lost.

He pivots toward me. Two of his fingers are pinched together and he’s motioning for me to put out my hand. A bead the size of an earring lands in my open palm. It’s a bug, one of those that roll into a ball when you touch it.

“Pill bug,” he says. “Medicine.” His mother used to call them that, pill bugs.

Thoughts of her come to me like an itch.

I pop the bug in my mouth and swallow, so maybe I’ll get better. Thomas smiles as he unearths a termite-chewed sapling, just taller than he is, and whips it around like a battleaxe. The stalk of it clicks against the arid brush, then snaps on the trunk of something live.

“No need to pester the healthy ones,” I tell him, and he boomerangs the stub of the sapling up toward the canopy.

A bird crashed into my window this morning, a sparrow. It’s happened before, a few times, just to remind me of the invisible barrier that keeps me entirely separate from the world. They hit so hard and the glass starts that sputtering tremor like it’s throbbing, bending just to the point before it shatters. Usually they’re gliding when they hit, wings outstretched to full span, but not today’s bird. This one was flapping fervently, in a hurry to get to some place or other. But regardless of form and trajectory they all fall the same way, plummeting towards the asphalt, limp like hair underwater. Their flaccid little bodies slap the cement, not as hard as they smack the window, but hard enough to gain the attention of somebody walking by. And the bystanders gather around and whisper and fret. Is it dead? And they so pity that infinitesimal lump of lifeless feathers whose pea brain was hardly living even before it hit the glass. Poor thing. They say ‘thing’ and still treat it as if its last thought had been of its wife, when really the thing can’t have a wife, or a thought for that matter. The flock won’t even notice its absence. The tactless thing ran on instinct alone, driven by hunger and thirst and the inexplicable desire to survive into the following day simply to fly and eat and sleep all over again. They treat it like it feared death, like in its last seconds it lived through its own worst nightmare, when really it only lived through theirs.

David Joseph is scheduled to graduate from Susquehanna University in May 2013. Other stories of his can be found in W.W. Norton's Hint Fiction Anthology.