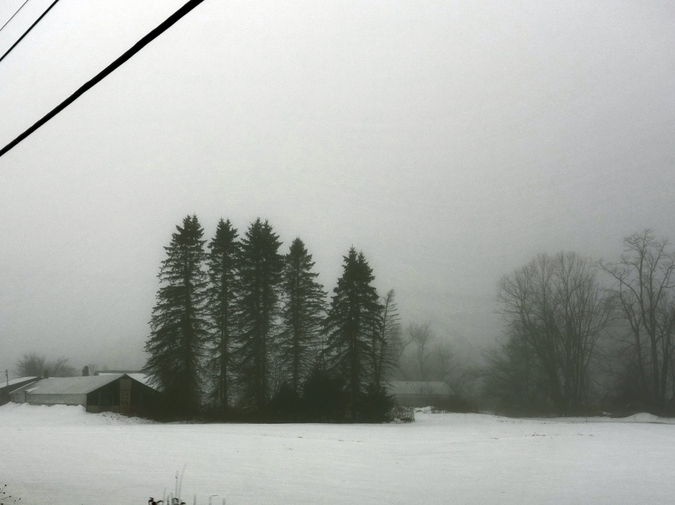 One evening you were dead. We sat around the table in the kitchenette until dawn, straining to overlook the shrieks of cardinals. It was January. The angelic neighbors poured through like imitation maple syrup, cloying and curious. Their windbreakers rustled constantly in the doorway, at the fridge. They made such a bluster, such a fuss, every single evening.

I remember. You were dead: tiny birds of glass littered the road like jeweled confetti for a New Year’s bash. Their wings were minute shards of sheet metal; their gaping faces made of chrome. They seemed to titter idly like the neighbors.

There are a hundred different ways to be consumed; swallowed, eaten, I won’t list them all.  Each is violent in its own, each with its merits.  Yesterday I filled my pockets with beef jerky and ran past his roost. I flailed my arms like I was trying to fly and I recited him a love poem.  Later, in town, my therapist would say, “she always knew the most creative ways to get eaten by a cougar.”

I am on my way to the grocery store to buy a tub of ice cream.  I am going to eat it all right when I get home. I am getting fat.  Every day I put on at least three pounds, on a good day, five.  That’s my best so far.  Soon I won’t be able to get into the car, then I won’t even be able to walk to it.  I won’t be able to leave my room.  I’ll have to have the ice cream delivered through a window.

When curious neighbors knock and say, “What are you doing in there? Come out already!”  I will be too fat to answer.  My voice will have suffocated in my throat.  If the police come, what can they say?  Killing myself like this isn’t a crime.

Two young boys squat on the bank of a pond.  They have caught a sunfish in a net and laid it out on the sand, where it flops, desperately.  One child holds the fish down with a stick, while the other (carefully, curiously) removes its eyes.  They leave it there, alive, drying in the sun.

Molly Bess Rector lives and works in Fayetteville, Arkansas, where co-curates the Open Mouth Reading Series and serves as poetry editor for The Arkansas International.