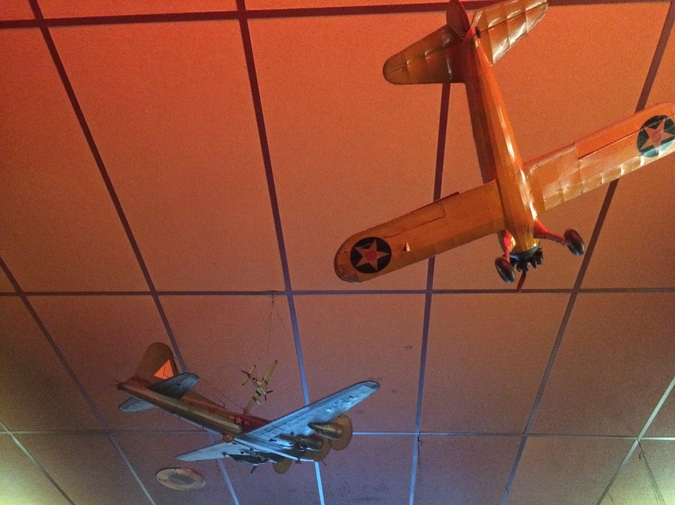 At The Swatch Watch Store I Newark's Terminal C

I’m going home.
I look at Swatch watches
at a store of timepieces for people who wait.

Once there was a purple inside space called deep of night
where God’s amygdala made time. The Newark moon
did not shine. No travel delays, all fine.

The past kept living inside me
like a cheap Timex.
“Where are you going?”

the store clerk said. But I heard my father in my head,
practically dragging me from bed to bon voyage me
out of Newark when this terminal was merely stairs,

no moving sidewalks, when we were people still,
not consumers, flying nineteen dollar flights into Burlington,
Vermont on People’s Express.

“Get your ass on the damn plane.”
My long dead father still waving me goodbye, his Barry White voice in a bubble
floating above me like a cartoon, or a synapse or brain protein.

“You’re making me late.”
Scotch still in my pores like milliseconds
collecting for takeoff into minutes. O, briefcase:

The Wild Blue Yonder song he used to sing me.
On my own. Then. Now. A store of timepieces
for those who wait. Once Amelia Earhart dedicated

this airfield and hangar. Deep inside God’s amygdala,
I tick-tock.“I’m going. I’m going”
And he’s gone into a parade of pinstripes.

I hold a swatch watch. It has a big cherubic face
that says 11:11. The angels are watching.
They haven’t aged. My hand to God’s portal.

Invitation To My Real Self From My Imaginary Self

Please come flying: I’ve been to a wake and a funeral. The other alters aren’t as fun as you. As the host I invite you clearly, over the Brooklyn Bridge, please come flying. So that when you arrive I will know you’ve been listening to your Ipod on the train, snapping Juicy Fruit gum, committing the same old adultery in your head because I am the host and you are the alter. Tonight we will be two characters in search of an author, or maybe I mean father.

On this fine morning—the Peter O’Toole Suite in the Chelsea Hotel is all ours, infamous, full of brightness, funky polka dotted bedspreads, an explosion of purple walls, where the great actor stays when he’s in town, the richness of his Brit lilt still echoing the halls—I quoteth him here, father’s favorite actor, stage and screen:

Sometimes you try to deny my existence, but today please come flying, so we may live truthfully under imaginary circumstances. You are playing Salome on her divorce tour--- and I am your sidekick, your bff. I am wearing the ripped black ribbon of mourning because I am the true identity responsible for our day to day functioning. While you study Stanislovsky, wear red Chanel lipstick that I can’t afford and read O’Toole quotes from old magazines:

Never choose the dumb waiter under Waiting for Godot for your point of
departure. This is a mistake. Brave mind you…

You want us to see Dutch domestic paintings, the giant Joan of Arc with her lacewings, nymphs in the big green room all at the MET. Fine: Art is where you want everything to be as evocative as possible. But I don’t necessarily want it. I am a archetype, a stepdaughter, so I have the most problems with the accuracy of the setting: You think we are playing hipsters who just turned forty.
In the Peter O'Toole Suite—we converse with ghosts living and dead—old beatniks, psychics, skeptics, bootlicks, a few comics. O’Toole speaks in italics:

I once played the devoted school teacher in “Goodbye Mr. Chips”
and a lovely schizophrenic in “The Ruling Class”…

But the problem with drama is; Nothing ever ends. Whatever happens, will happen Again after the matinee. O’Toole agrees with the pipes clanging us awake:

The dead want the living to learn from their bad timing—
So isn’t it time to start living as soon as you can? And then just keep your fingers
crossed if you survive?

Of course a man newly dead would really know. And the poet would bear witness to that knowledge, if only he could work out the way of getting it.

Dangerously we would live, hysterically we agreed…
we drank to our precarious healths and to that good ship Venus.

I try to split from you as I have split from our others. I stare at the doorknob until I trance. Then I can be you again and check the doorknob lock thirteen times and wash hands five or ten times because anything can happen and sometimes does.

Elizabeth Powell is the author of "The Republic of Self" a New Issue First Book Prize winner, selected by C.K. Williams. Her second book of poems, “Willy Loman’s Reckless Daughter” won the 2015 Anhinga Robert Dana Prize, and will be published in spring 2016 by Anhinga Press. Her work has appeared in the Pushcart Prize Anthology 2013, Alaska Quarterly Review, Barrow Street, Ecotone, Harvard Review, Handsome, Indiana Review, Missouri Review, Mississippi Review, Slope, Sugarhouse Review, Ploughshares, Post Road, Zocalo Public Square, and elsewhere. She is Editor of Green Mountains Review, and Associate Professor of Creative Writing at Johnson State College. She also serves on the faculty of the low-residency MFA in Creative Writing at the University of Nebraska-Omaha. She lives in Vermont.