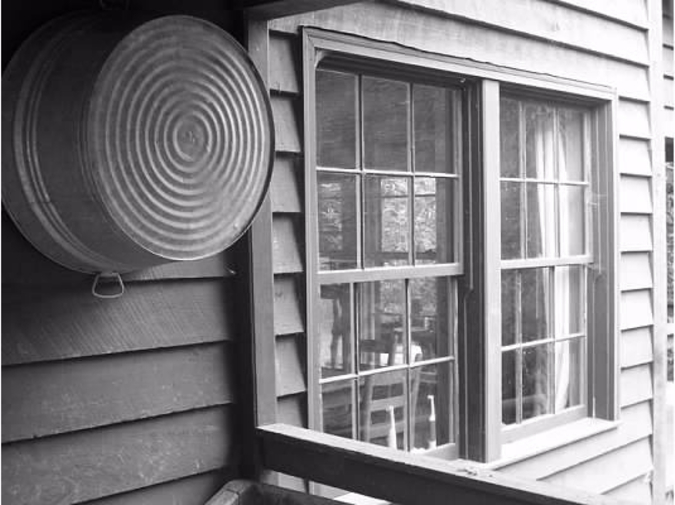 I keep coming back to the church.  Or maybe it was city hall
somewhere.  My great-uncle’s hand in hers, pink lacing

brown.  I almost forget the drama that must have happened
before.  Somehow the blue wool dress she could have worn,

the hat with the afterthought veil not really intended to hide
her, the gloves that she held loose in her other hand--these

are much clearer to my mind than the rest of it.  I met them
(the uncles and aunts who did not approve) but I managed

to erase their faces.  Hands, bumpy and uneven, cool together
at the church altar.  He used to walk for hours up and down

the gridded streets of New York, to get his exercise, I’m sure,
but the City must have had confusions

and exhilarations not found in West Virginia.  His grandfather,
a popular and wild red-haired lawyer, probably fell

into a canal when he was seventy-four while on a mysterious
business trip.  However it happened, he died.  Meanwhile, the

lawyer father tried to be opposite in many ways--sober as a
Methodist, disapproving of card games and dance.  When my

great-uncle was a very young man, he dated one of the women
who would go on to try to shoot Gerald Ford.  Instead of killing

the President, she managed only to slightly wound a passerby
and ruin the life of the ex-Marine who saw the gun and tackled

her, not knowing that his act would make him famous, fling
him out of the closet, and bring on him the eventually fatal

prejudice of his family and the nation.  After enough years
for my other, erasable, great-aunts and great-uncles

to have children, the children visited to beg forgiveness for the sins
of their parents.  I wasn’t born yet.  But let’s go back to when my great-

uncle has taken her ungloved hand in his and turned to the
preacher or the judge, the light making the dust confetti.

We turned onto the gravel road, me out of breath
from the long walk up the driveway.  But I was six,
and my legs were short fat things with kid-burst

strength and no endurance.  I tried to reach for his sun-brown
hand, to pull him to a stop, to get his attention, to chew
on its comfort like a grass stalk on a sunny day, but

he was moving down, away.  Twisting his head over
his shoulder, my grandfather said, “Don’t ever do this,”
snapped a mushroom from the side of the road and ate it.

At the top of the steps to the dock, where the rowboat
had just arrived, my brother stood and Grandpa knelt
around him, and I wanted to know what they were doing.

“I’m showing your brother how to make a good knot.”
The looped rope in his hand was my Dad’s scratchiest,
I knew.  “I want to watch,” I said.  “No. We’re doing this now.”

He couldn’t hear how loud his tenor voice was.
Later that week, that voice taught us “Chattanooga Choo-Choo.”
When my child printing took too long, he slid the paper

from under my pencil and wrote the rest himself.  He didn’t know
that my brother and I spent years using my monkey
dolls to act out the scenes of shoe-shining and whistles
blowing eight to the bar.

Eliza Callard was born, raised, and now lives in Philadelphia.  Her mother is English, her father is from West Virginia, and she often writes with those places and the people she loves there in mind.