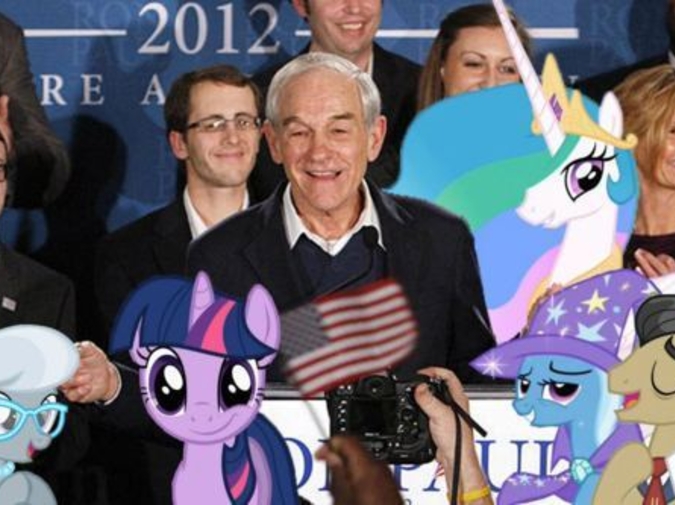 Spend enough time on Twitter and you will eventually discover there is within it an odd, alternate world of very funny, 140-character prankster surrealists. A shortcut to discovering them: Go to your Twitter search field, type "twet" (yes, one "e"), and click the "People" listings. And there they are. Follow all of them.

Another way, though, to discover the really interesting stuff going on around Twitter is to find and follow Katie Notopoulos (current Buzzfeed editor, compulsive blog-maker), who through her network of friends and fellow travelers, her many subculture focus lists (bronies, adult babies, Avengers role-players) is a kind of archivist of the things that fuel the creative impulses of Twitter's dark and beautiful heart.

This way to the rabbit hole: http://katienotopoulos.com/blogs.

I joined Twitter in maybe 2008—I wasn't exactly an early adopter; I kind of resisted it at first.  I had the same feeling a lot of other people did at first that I couldn't figure out what to use it for other than telling people what I was eating for lunch.  Usually when I join a new site I'll make up some obscure username at first so people can't find me—my original Twitter name was @triscuitfan.

How long did you stay anonymous, and why did you drop the anonymity? What was your early Twitter life like?

I only very recently stopped being anonymous; I changed my Twitter name to my real name only this August.  I took great pains to keep sorryimissedyourparty.com anonymous for a long time; I was really afraid that because it was mean that people might sort of seek retribution on me if they knew my name.  There's also a lot of NSFW stuff on there, and I didn't want my employer or my parents to know.  I eventually mentioned to my mother that I had a blog, but it wasn't parent-friendly, she said something like "oh, well of course you know we would never look at something you didn't ask us to look at."  And that sort of liberated me—I could keep posting pictures of naughty things and not worry about my parents' disapproval.

The thing I regret is that it's a lot funnier using a handle.  It's not funny when it's my bullshit name saying some crap on Twitter.  But @dogboner could just only every Tweet Instagrams of his breakfast and it would still be hilarious because it's coming from a handled called "dogboner".

So, speaking of the things that fascinate/amuse you, how many blogs do you have at this point? Sorry I Missed Your Party links to 22 of them.

The links in sorryimissedyourparty.com are (I think) up to date. I also have them listed at katienotopoulos.com/blogs. 22 sounds about right, but I don't update all of them daily/weekly. Some of them like "this cold is kicking my ass" are kind of a one note thing that doesn't really need to be updated to get it's point across. And its not like someone would see it once and want to come back for more later.

The one I regret not being good about updating is "This Week in People History". I was pretty excited about that one but them discovered that People magazine has its own little "this week from the archives" feature. But theirs is kind of underused. I love those old covers. I love celebrity gossip and Old photos and it's the perfect marriage of the two.

What makes a thing cross the line to "I need to make a blog of this" for you? And what is it that catches you interest in the things you choose to explore?

It's hard to say exactly what it is that makes noticing something is a funny pattern and then turning it into a blog. I guess the criteria is if there's enough of it out there and if it's a concept that can be "gotten" easily. I have a few I've made and then gave up because the concept wasn't really something that I think people would get right away. An example of this is thegenderdivide.tumblr.com. The concept is graphs comparing the number of google results for gendered words or phrases. But that's kind of a mouthful to explain.

So, moving over to Twitter, then, you have a platform where a single instance of oddity can be shared, or two. But I wonder what came first: you're Twitter community—the folks you share this stuff with—or your sharing? Did you find a group of people, realize you all had a similar sense of humor/wonder, and go forward? Or did you find the oddities, start sharing them, and have a community gather around you?

Those two things sort of evolved separately.  I had a small built-in audience on Twitter of people who were fans of Sorry I Missed Your Party, and I found Twitter was a great way to share the weird things I found that weren't thematically in line with SIMYP but I wanted to share with people.  Separately, I found and sort of doggedly forced my way into this community of Twitter users who were mostly from somethingawful.com, and were doing something completely unique and interesting with Twitter.  People like @casualmalexlfan, @fart, @dogboner, @dril, @tree_bro, @ulilitylimb, etc....

They weren't using Twitter to just talk about the news or what was happening in their real lives—they were doing this abstract absurd stuff that I had never seen anyone do before.  They were the first people I ever saw who realized the humorous function of searching for something stupid and retweeting.  They did it all totally anonymously—not like they were trying to have any notoriety as comedians or anything; they just loved fucking around.  It was thrilling.  Anything funny I've ever done on Twitter has been totally influenced by them, and I'm saying "influenced" when you could probably argue for the term "ripped off".

Have you identified a "patient zero" for this group? Someone who infected the others (and you) with this sensibility first? And have you ever tried to figure out exactly what it is that is that makes a, say, @dril tweet successful? What it is you try to replicate?

Since these guys all came form the somethingawful.com forums, I think they already had this whole sort of language and syntax formed before Twitter came around.

As far as @dril, I sometimes look at his timeline, and I notice he's only made about 1,000 tweets.  I've made about 10x as many tweets as this fucker, and none of them even come close to his.

The thing about @dril tweets that I take to heart the most is that it's surprising how easliy people can "get" it when you inhabit this different voice or set up a crazy scenario without having to explain a whole long setup.  It sort of defies what you think you can accomplish in 140 characters.  I think this is a good example:

what do you mean 1800-GOT-JUNK only takes waste "Out" of peoples houses. thats an absurd concept. i will hang the fuck up right now

What occurs to me about the "somethingawful" folks is that the throughline between all the tweets is that they seem to be coming from a group of people who fundamentally misunderstand the world, or are simply from a very different version of our own world. Which sort of brings me to the other group of people who seem to fascinate you on twitter. People who live in very specific, very bizarre subcultures. Can you talk a little about what interests you about, say, diaper fetishists?

What I love about about the adult baby/diaper lovers on Twitter is that the medium is so perfect for them.  The tendency on Twitter to give banal status updates is perfect for someone who is very interested in communicating what's happening at that moment in their diaper—did they just pee their diaper? Put on a new one?   Imagining these people in real life or in any other way of how they express themselves is pretty depressing.  But in these short bursts on Twitter, it's hilarious.

Where do you find it all?

It's definitely the banality of their tweets that cracks me up.  In fact, I guess when you think about it, the whole idea of being excited about dirty diapers is in flagrant opposition to how people who actually have to deal with a baby's diapers think of it. For actual parents of a baby, it's a routine, it's drudgery.  Diapers are thing people think of as the big downside to having children; it's sort of the symbol of all the unsexy, tiresome, and unpleasant parts of parenting.

So even when they're talking about dirty diapers, which they find thrilling, to a "normal" person they're describing a banal unpleasant thing we'll all have to deal with at some point with our own children.  It's not sexy at all for that reason.

I use Twitter lists to keep track of diaper people on Twitter.  I have a list of around 130, and I add to it regularly.  Mostly, I find them by searching terms like "my diaper" or #abdl (adult baby/diaper lover).  I'd also added once that other people are ironically retweeting, or I'll look through the follow  list of one of them to see who their friends are.

This way, I don't actually have to see them in my everyday feed—I can just check in with them once in a while to see what's going on in the diap world.

Anything new you're keeping track of? Do people send you the odd oddball tweet and say, "Hey, Katie! Have you heard about [_____]?"

Recently people have alerted me to two different really bizarre bot accounts.  One is @AngusReveley—it tweets phrases it scrapes from other people's tweets that involve the word "eye" and then bookends it with "Angus" "Reveley".  For example:

Angus Beauty is in the eye of the beholder Reveley

Angus At the eye doctor !... Reveley

[Editor's Note: Sadly, this account—and the one Katie is about to mention, @markgeorge661—has been suspended.]


Another weird bot account is @markgeorge661  It's hard to figure out exactly what this bot's purpose or script is, but he searches a variety of keywords and then replies "jail".   For example, today he tweeted "jail" to about 10 people who tweeted the word "North."

With @markgoerge661, the keywords seem to be random (but also frequently Spanish words?)  He changes the keyword frequently.

The thing about Twitter is like..... I mean, I can't imagine a future where we're still sitting around tweeting to Twitter in 20 years, right? These things will pass.  It might stick around longer than Friendster, but I can't imagine being 60 years old and RTing diaper lovers.