Turn in the Direction of the Skid 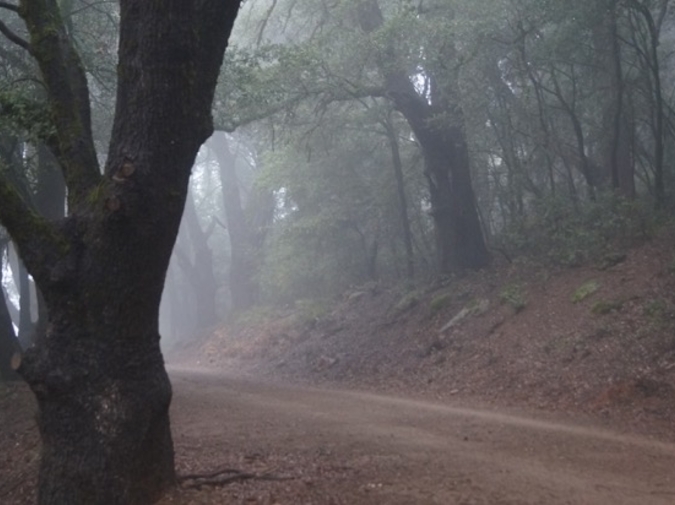 A dead shrub mashed against the windshield on the first roll. I’d felt cold as long as I could remember, no great duration since I’d acquired the habit of smoking dope laced with meth on the theory that one counteracted the ill effects of the other. Upside down, a cloud of ash filled the car like a snow globe. I prayed we wouldn’t roll again, but knew we would.

On the second roll, the windshield pulverized to spider webs, causing me to think about the crackerbox house we shared and the crap electric heat too expensive to run. “We” consisted of me, Moss and Spence who all met in grade school, plus Dan who moved over from Seattle when his rent got jacked up. “Let’s split to LA and stay with my brother and work construction where it never even snows in the winter,” Dan said. Eleven in the morning and the sky foretold grey endless misery. “Make the call,” I said. “It’ll be epic.” Pitched into that second roll, the cooler lid popped, launching beer can warheads through the confetti of cigarette butts and roaches.

A rock outcrop punched in the center of the roof on the third roll. A kaleidoscope of ground cover and gravel mixed with crumbled windshield. We’d wadded backpacks and sleeping bags into the back of the old barge of a station wagon I bought cheap from Mom when she got the Toyota. We’d made it as far as that place where westbound ascends the shoulder of the hill, perched above the eastbound lanes. The wagon executed a gymnastic pivot on that rock and I thought mom always believed I was special. She’ll be so disappointed. A power chord sounded when Spence’s guitar smashed against my skull. Good thing it was the acoustic.

Time went gooey on the forth roll. I re-checked the side mirror to see if Mr. Eighteen Wheeler still rode our ass, but the mirror was gone, the truck long since pulled around and blowing his horn, startling the shit out of me. Maybe I flinched. Maybe his windshear flicked us off the road like a bottlecap. We exited the road where the barrier was already torn out. Maybe the tires were bald. Turn in the direction of the skid, I thought, but what direction is that when you’re rolling downhill sideways?

We landed wheels down on the eastbound lane, facing back toward town. Sleeping bags, packs, ice chest, cans and the smashed guitar settled in shake-and-bake ash, gravel, leaves and glass. We sat a minute. Maybe an hour. Maybe some other interval of ice blue time/space and/or life/death.

We experienced a simultaneous hallucinatory vision of fiery obliteration by that evil-ass semi coming back the other way to finish the job.

Everyone but me tried the doors, which would not open. A frigid wind blew through the car. “Tailgate’s open,” Moss said. They clawed over seats and luggage and each other to get out while I sunk into the driver’s seat, a shivering captain ready to go down with the ship. Moss started to crawl back in through the tailgate to haul me out. I popped open the door and stepped onto the miracle of pavement.

We huddled on freezing ground, gazing at flat tires, smashed windows and the stove-in roof, wondering how the hell we could be alive. My teeth chattered so hard I thought they’d chip out despite the sleeping bag cocoon draped over my shoulders.

A state trooper rolled up, got out, looked at the car, up the hillside, back again on repeat. He put us in his cruiser and drove to town. He didn’t search the wreck, didn’t breathalize or drug test us.

“Dave’s girlfriend would have been pissed if we showed up anyway,” Dan said in the cruiser. “She thinks I’m worse than Hitler. Because of the drugs and stuff.” Maybe the trooper didn’t hear that, but I like to think he subscribed to the possibility of an aftermath.

Dan got an associate’s degree in business, works for a bank and still deals a little dope on the side. Moss sells high-end real estate in the city. Spence moved to Brooklyn for the music and he’s got an EP on Bandcamp that’s pretty damned good. I’m the only one who stayed in town. I manage a diner, have two kids, a wife and see my mom three times a week since she came down with the cancer. I’ve still never been to California. I don’t plan to until the kids are old enough for Disneyland.

When we go, we’ll take an airplane. It’ll be epic.

Robert P. Kaye’s stories have appeared in the Dr. T. J. Eckleburg Review, Beecher’s, Pear Noir!, Per Contra, The Los Angeles Review and elsewhere, with details available at www.RobertPKaye.com. His chapbook “Typewriter for a Superior Alphabet” is published by Alice Blue Press. He facilitates the Works in Progress open mic at Hugo House and is the co-founder of the Seattle Fiction Federation reading series.