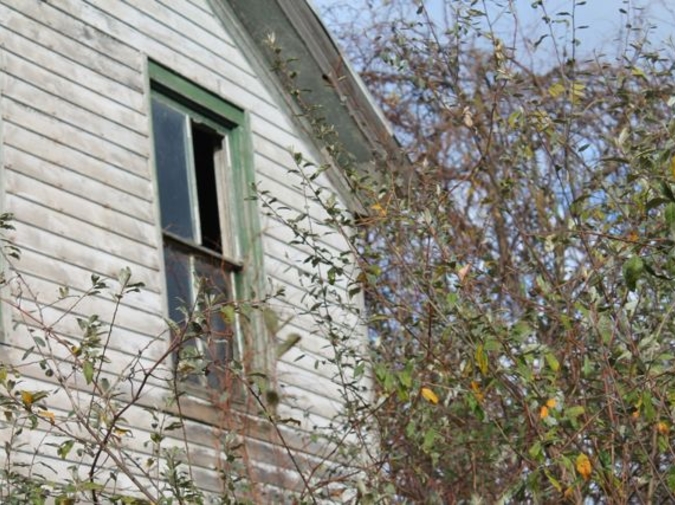 Cops come and take Hannah s Dad away this morning, throw him in the back of a car and yelling and screaming at him the whole time like he done left the ice cream out all day. People standing on porches watching the lights go on and off, on and off, even though it’s light out and there are dead leaves everywhere ’cause no one on our street bothers to clean up ’cause it’ll just be dirty tomorrow. Mom says it’ll always be dirty tomorrow.

They yelling at him to shut up, to sit in the back and shut the fuck up and no one is saying nothing but everyone is watching ’cause we ain t got nothing else to do. We don’t wanna do anything else and it’s the week after Thanksgiving so everything is dying anyway, all the trees and the bugs and the wasps living under my window. Everything dying real slow. I can hear the wasps in the night sometimes, zipping at each other, talking to each other in their wasp words, all buzzing, all singing, never stopping. I don’t know if they breathe, but they talk to each other.

Sometimes I use the wasp noises to drown out the sounds of the TV in the living room or the ambulance going by like a woman crying in the dark, long wails like that, like when your Mom finds out your Dad ain’t coming home, like that, that’s what ambulances sound like for real. Ambulances will always sound like because that sound makes people pull over, makes them think real hard about all they done wrong and what they gonna do wrong ’cause we always doing wrong. Everyone out there doing wrongs in the dark.

Hannah's dad got muscle, got crazy muscle, the kind you see on a dog when it’s running fast, the kind you find on the X-Men, but he’s not a freak, he’s not the Hulk. He’s just mad all the time at the world, at himself, at the dogs on the street chasing each other between houses, biting each other’s asses, calling each other’s names in the dark in their dog howls screaming at the moon. They all got people names and dog names. Most people don’t know that, but they do. Just because you don’t know something doesn’t make it not true. Just means you don’t know. Just means you never asked.

Sometimes you don’t wanna know things that you already know because you ain’t any good at sleeping and you ain’t any good at forgetting and you won’t get any better at either for a long time, because of the dogs and the ambulances and the sounds Hannah s dad makes when he is mad. The cops will come but they will always go away real quick because they don’t know Hannah’s Mom lies. They think she’s telling the truth about her face and Hannah’s face, but it’s a dingy truth, like when I seen two dogs between my house and Hannah s house doing each other and not even meeting eyes like they supposed to.

After Thanksgiving, everyone on the street was drinking and there was brown glass all in the street so it glowed up like shitty stars in the dark. I took what was left of Mom s turkey out of the garage and I waddled it back, waddled ’cause it was still heavy ’cause she went and bought a giant turkey even though there is just two of us and the ambulance noise in our house, and so we didn’t finish it. I dragged it out behind Hannah s house in the dark in between the laughing in the street and the dog’s talking to each other and I dumped it down the hill behind her house, down into the ravine—what my Mom calls it, like it’s a secret name for where people go to kill their dogs or drown their cat’s babies in the water at the bottom, like it covers up the dark sounds and the garbage bags at the bottom.

I left the turkey there, what’s left of it, all ribcage and bones and nasty pieces no one would ever eat ’cause Mom accidentally cooked all the organs inside the bird so it tasted wrong, tasted like I licked the sink before anyone did the dishes.

I went back inside and lay in my bed, hearing the sound of meat hitting meat coming from next door and the sound of a fire truck like a bird just gone and woke up flying by me in the night and the trains like owls hooting at each other. I knew I wouldn’t ever be able to fly like anything, but I’d at least like to go on a plane once, look out the window down on this neighbourhood, these houses all laid out here, smudge them out against the glass with my thumb, make them all not, make them all the opposite of me.

Me breathing on that plane, eaten Cheerios and drinking Champagne or whatever they give you on planes now when it’s your first time and you’re flying by yourself and you don’t know where you flying to, but you know it won’t be back. Don’t look back. Don’t you ever look back, that is what I will say to the lady sitting beside me on the plane, the one reading a good long book with over four hundred pages, a book she will let me have when she’s done.

In the middle of the night, when my Mom was asleep, I took her phone and I put it right against my face and pushed 9-1-1, but I didn’t talk about the sounds next door or the dogs or the wasps. You can’t call the police on wasps, you gotta smoke them out. Everyone knows that. You wanna get rid of something, you gotta smoke it all out on your own.

There was a lady s voice real close on the phone, real, real close, breathing in my ear and asking me to identify myself and so I told her my name was Logan and that there was a body in the ravine—yeah, the ravine, you know what a ravine is?—behind the houses on Longshanks Crescent. I told her it was behind Hannah s Dad s house but it was nothing but baby bones now

and other limbs, and limbs seemed like the right word ’cause she started asking more questions and I said he was on parole as far as I knew because I knew that was a word people said on our street under their breath like trial separation or gut rot or whore. She asked more questions, but I said I gotta go and I don’t know if she could hear the wasps or the dogs or Hannah s dad, but I really wished she could, I wished so hard for that because they are real to me.

I threw the phone in the ravine too, broke it into tiny pieces and threw it down there. I stayed up all night reading X-Men and listening to the TV talk to Mom, listening to whatever is in the walls telling me nothing will be alright, but I knew it would be, ’cause the ravine only has bad things to do for us, and sometimes you need bad things to be done.

The house still smelled like cranberry sauce from the can when I stood at the window with my best shirt on all buttoned-up because I called in sick to school, told them that my mom said we were gonna go see my dad up at Kingston Pen, and they got all quiet and said oh is that so, and I said it was so and they got even quieter and then said to bring a note tomorrow like they didn’t know I know how to do Mom s handwriting. They always act like I never ate rotten turkey and smiled over it or knew that my Dad wasn’t even in Kingston no more, that he was gone now real gone like the wasps and the leaves and shit when winter gets here.

I hung up on them and they didn’t call back because we’re all cowards, burying our secrets in the ravine, all the deflated basketballs and old dishes and garbage bags full of baby clothes and my dad s dirty magazines. I just stood and listened to the dogs fighting over the bones.

The cops came and then more came until the street was made of lights and hairy knuckles. They dragged Hannah’s dad out into the street and told him he was a disgrace and they weren’t surprised. He spat at them and flexed his Hulk muscles, but he couldn’t break the handcuffs ’cause I know none of us are that special. And I saw Hannah in the window too, but we never talk ’cause she is homeschooled by her Mom. One time she asked me why my Dad left and if it was my fault and I told her he was just like one of the X-Men, he was too strange to die, he was too smart and she just smiled and said that was made-up.

I never said nothing about the meat sounds or the wasps to her. I said nothing about the turkey neither and I know sometime soon the cops will probably figure it out, but I know those bones looked kind of like baby bones, looked kind of wrong and I could hear the dogs tearing at it in the night, calling each other their secret names real loud out into the dark until they gave me a secret name too, a name for feeding them the best Thanksgiving dinner they ever had in the cold like this, the best meal they ever had before the winter finally comes and half of them die.

I told Hannah nothing and I will still say nothing when her Dad comes back home with even more muscles and even more ways to make noise in the darkness, but I do know for a few nights she’s gonna know what it’s like not to have no Dad there and she’ll know what quiet is like and she’ll wonder if she is better off and if it’s safer and if he really did kill a kid and leave it in the ravine to die with all the baby cats. I won’t be able to hear any of it though ’cause I will finally be asleep, waiting for it to snow, praying no one wakes me up and that Mom cleans up the sink before the weekend and that it gets cold enough to kill all the wasps outside my window.

Andrew F. Sullivan is the author of All We Want is Everything (ARP Books, 2013). His short fiction has been published in places like Grain, EVENT, The New Quarterly and Joyland. Sullivan no longer works in a warehouse.