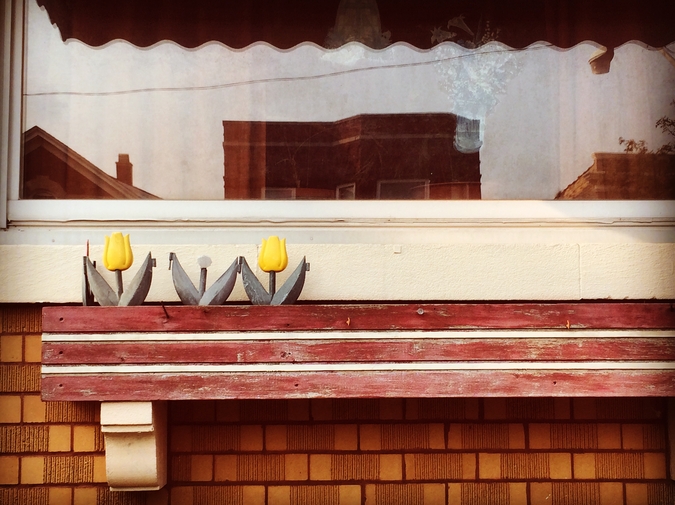 Was it supposed to be the way you wanted?

You had just dropped out of vet school, moved back home. “Too squeamish,” you said. Weren’t able to cut open the things you love.

But you being you wouldn’t hear it.

We spent that summer on Dad's couch trying not to move, because if we didn’t move we wouldn’t spend. I had no money either. There was talk of New York, but how? You and I both knew it wouldn’t change anything.

Sometimes I shelved books at the library, but it hardly paid. You tore tickets at the movie theater near the highway, where the woman threw the muffin at your face when you told her she couldn’t bring it inside. “It’s the principle,” she’d said, after it hit you.

It was blackberry. You said it looked delicious.

That night was the night of the break in. We heard the crash downstairs, and you grabbed my hand, my arm, in fear. It wasn’t Dad — Dad was out with that Kathy woman from the Humane Society. It was someone else.

We found him bloody under the window. He’d slipped, caught himself on a broken shard. You asked if he was OK, and went to get ice and a bandage. I was the one who sat with him, held a towel gently to the gash. Until you returned.

“What did you want to steal?” I asked, sweeping.

He was only a kid.

“Silverware,” he said. “Maybe some electronics.”

Once treated, you showed him to the door.

The next week I got in a friend’s car and left for New York. But I know you know this. You were in that car too, with a cactus on your lap — listening, harboring, scared.

David Byron Queen grew up in Northeast Ohio. Since graduating from The New School, he has worked as a dishwasher on a reality cooking show, a copywriter, and a script reader in Hollywood. His work has appeared in The Rumpus, McSweeney’s Internet Tendency, Fiction Advocate, NANO Fiction, Monkeybicycle, VICE, and elsewhere. He lives in Brooklyn, NY. Find him on Twitter @byron_queen