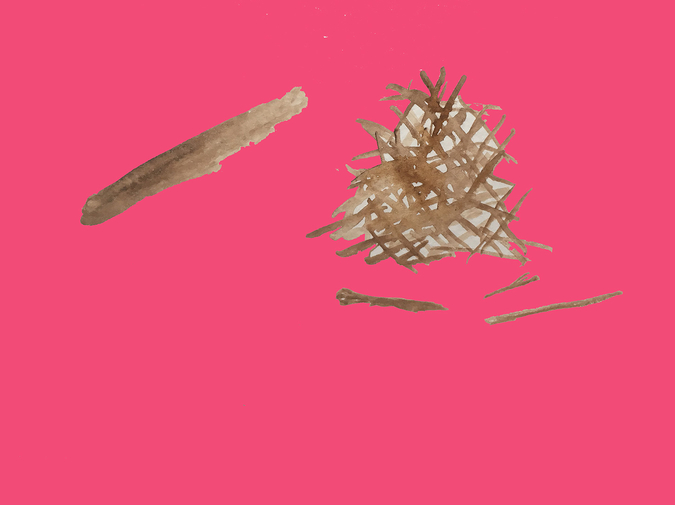 Previously on... Episode 1: "The Landing"

Yoda had nothing with him other than the clothes on his back and the debris inside of the pod. There was no need for anything else. He had left his lightsaber. There would be no more fighting, unless the slugs started unionizing, or if the other creatures here went on the offensive. Yoda still considered himself the top of the food chain and until something else decided to challenge him on that point, he would remain there, in this new hovel, trying to feel at home.

Yoda found a good stick. A really good stick. He had tested many sticks, tested them against trees and against the pull of the mud, and had lost all but one of the sticks. They had cracked or bent or buckled under what little weight Yoda had and therefore, they were deemed unfit. Each heaped anew onto the pile of unfit sticks.

But this stick, the one he now held – this stick was the stick that would get Yoda to the ends of Dagobah and back. Or at least around the swamp and back. It had a perfect knob on the top that fit like a small fruit in Yoda’s hand. Its end was thick enough to serve as a walking stick and sturdy enough to serve as a blunt object when the neighbors came pecking. He had given chase to three bogwings that morning and, as they flapped and squawked away from him, afraid of this new extension of his tiny green arms, that is when it truly became his stick, his one true companion.

“Serve me well, you will,” he said, cackling, using the stick to brush rubbish out of the pod like a broom. “Out with you. Out. Out.”

By midday, there was nothing else for him to sweep out. He had a home, modest though it was. He had himself a chunk of bark that he had peeled off a tree that he was now utilizing as a front door. And while it didn’t have any hinges, he was convinced that, should it be called into action, it would serve him adequately.

He had a luxurious bay window – the broken front of the pod. From it he could see the green, bubbly swamp and the haze that perpetually rested on top of it and seemed a sort of ghost, hovering back and forth, never leaving the shores of the swamp. And Yoda would know, he had watched it for hours.

He had a room. Just one, but Yoda was just one, too.

He laughed. He had spent the previous night sleeping soundly and, given the density of the planet, it was impossible to tell how long he had slept for but, when he awoke, he felt a fresh start. There were no lights in the sky, no stars, because of the perpetual gray blanket that encased the planet, otherwise known as a thick atmosphere. He felt as though there was a life to look forward to here on Dagobah. There comes an age where you need a little rest and relaxation, and being in his 9th century of life, he couldn’t think of a better time.

He stepped outside. It wasn’t raining, but that didn’t mean it wasn’t wet. It was always wet. The bogwings returned, but at a cautious distance, and were poking away at the ground, plucking worms and slugs out of the mush. Yoda lifted his stick, intent on shooing the birds away, but recognized that there were plenty of slugs and worms to share, if he wanted to. If there was a coexistence required of him with these creatures, he might as well try his best to get on with it.

He mimicked the Bogwings, prancing about, hopping as they did and plucking. Although he plucked with his fingers, not with his beak. He held the slugs in one hand, like a squirming bouquet, and plucked with the other, but that meant he had to leave his stick behind and it soon left him anxious, as if without it, he would topple over and the bogwings would be picking at his own remains within the minute. So he took what he had, pushed off the stick and went back towards his sparkling new home.

“Cook you, I must,” he said to a particularly large slug. “A stew, you will become. Hmmm. Stew.”

He didn’t have a pan, but he had kept a piece of the pod that was shaped like a large spoon. He dropped the slimy things into the spoon and smooshed them with a rock. The result was a greenish-yellow slime that made Yoda’s salivary glands kick into action. He had eaten the worms raw and been perfectly satisfied, but a stew was something else. A stew was the pinnacle of intergalactic cuisine. He had forgotten, in the haste of city life, what it was like to enjoy taste, but given the spare time he now had, he might as well become a gourmet chef.

Yoda piled some remains of failed sticks and began rubbing one hand together, calling the air molecules into close proximity using the force and rubbing them against his skin until he felt the burst of heat and held, hovering over his hand, a small flame. The sight of the flame made his heart beat quicken and he quickly moved it to the wood pile. It was destructive. Fire destroyed things. It had destroyed the Jedi temple and it would destroy so many more things in its time. Even in small doses, as now, it destroyed the pile of unfit sticks.

But it also made stew.

Yoda held the makeshift pan over the flames as contentedly as he could, spinning the stick in his other hand. The aroma began to fill the small hovel. It didn’t smell like any stew Yoda had previously made, and that was part of the magic of it. A day with a new stew was a good day, and the new stick was a bonus.

The slime began to separate, the greenish color rising to the top. It separated so poignantly that, if he tilted the pan to the side, he could see hints of the yellow underneath. He was that yellow, and the planet was the green. It was his job to keep the green on top of the yellow. To avoid detection from the rest of the galaxy. He may be in retirement, but not everyone would accept this. Including the bogwings.

But in the meantime, the stew needed to be stirred, to prevent the separation, and stir he did, whisking the colors back into a syrupy combination. Bubbles began to well up and pop and, when it had boiled enough, Yoda snuffed out the flames, casting an approving look at the graveyard of sticks, now burnt. In retirement, they had served a purpose, too.

He downed the stew in three successive gulps and smacked his lips, letting the taste linger. It was a pungently flat taste, that hung in his mouth like a lingering guest at a party, offering the occasional entertainment, but being unwanted overall. He would need to find salt in the near future.

With a full stomach and a new stick, he decided that it was time to find a good walking route, preferably away from the neighbors, and perhaps in the direction of some salt. He moved his door to the side and some pieces fell off of it. When he moved it back, more fell off.

“Problem, you are becoming,” he said. He could see through the cracks in the door into his own house. Meaning the neighbors would be able to see, too.

He turned slowly and saw the bogwings, all in a row, their heads cocked and their eyes still refusing to focus on any one thing. Without wanting to make too much of a scene, Yoda gave them a courteous nod, as he used to give that Twi’lek doorman when he started asking about Yoda’s day at work, and turned to walk on.

Yoda kept telling himself not to look back. If he couldn’t trust his neighbors, then this rest and relaxation would never come.

He walked on, along the side of the swamp, which he now decided was a lake, because it sounded nicer to refer to it as such. He had always wanted a lakeside house, not a swampside one. It’s all in the perception of things, as he had come to learn. In time, in another couple hundred years, Dagobah Lake will have always felt like a lake to him. A green and brown one that bubbled and belched, but a lake, and no one could tell him otherwise.