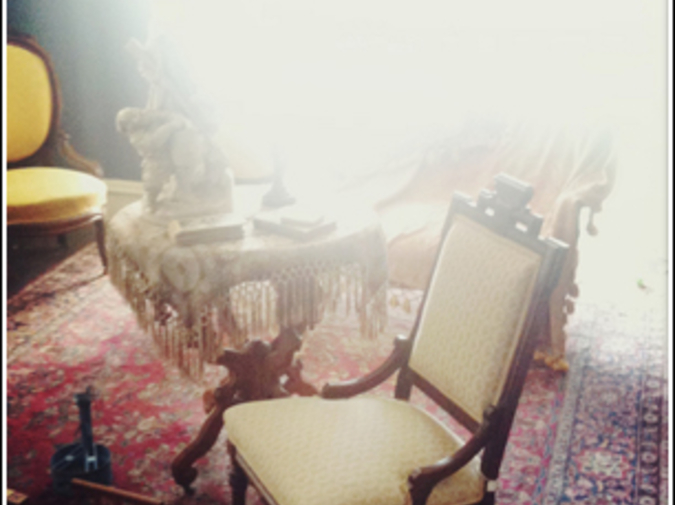 Michiko takes a class to learn the guitar. The class is taught by a moustache and a pair of boots. Michiko's ex-boyfriend moves to Kyoto, which is not Osaka. Michiko's musical ability is locked in a file cabinet with Judy Garland's tax returns. When she strums the guitar the moustache shakes his head while the boots pretend to cough. She is having difficulty with the bar chords. F is appropriately taxing, considering its letter. Her F sounds twangy, unmusical. Michiko has been described as a human by very many humans. Michiko is a waitress for a New Wave French restaurant in Osaka. The problem is that she's not applying enough pressure with her index finger, which is freckled, like the rest of her, says the moustache. The boots vehemently agree. Syndicated reruns of Densha Otoko make her heart feel full, at night, after work, alone.

Alone after work Michiko smells faintly of Godard. In ninth grade Michiko dyed her hair from its natural shade of kuroi to a disastrous hue of red wine: the effect was in a word blrrgspptt. Her ex-boyfriend plays the guitar very well. He is in a band, in Kyoto, which is not Osaka. He is newly blond and very handsome. But maybe he was always very handsome. Listening to the theme song of Densha Otoko makes Michiko's heart feel incandescent, inflated. Her ex-boyfriend plays blues he knows nothing of. The Densha Otoko theme song is mostly Bm7's and C#m7, according to tablature she found on the Internet. The moustache tiredly reminds her that minors and sharps are the most challenging chords for beginners. Vulgar letters, melancholy chords. As always the boots agree. When Michiko strums again her pupils glow with what must be concentration. It helps to close your eyes, someone says from far away. It helps to shut them real tight.

The Green is Wrong

Celia pictures her mother lowered into a bath of salts. (Pickling Attempt 3.) Celia tightens the lid on the jar of carrots. The sun is beaming into the kitchen at roughly a fifty degree angle; the light catches on a chipped glass in the sink and reflects up to a blank area above the oven where it projects like an incorporeal clock. "All right, you orange bastards," says Celia, to the middling carrots. "Let's not have any trouble. Pickle." Her mother's face is imprinted with permanent makeup, a decision made in the late nineties, back when everyone was a happy idiot. Eyebrows, tattoo. Eyeliner, tattoo. Her mother has her throat tightened, too. Taut. "To remove the waddle," she had explained to her daughter, "you must first accept the waddle." The mason jars have already been sterilized in the oven. Her kitchen smells caustic, of peppers. Celia's mother considers waste a virtue of the rich—and so litters constantly, to the chagrin of all those around her, and claims to wear a brand new pair of socks each day. Celia's eyes, swimmy. Mason jars, steamy.

Celia's hands, pink. The décor in the kitchen interfaces bucolic Pottery Barn with tribal Pier 1: neither side capitulates. A rusted iron monkey sits atop the refrigerator like a rotting child on an scolded fence. Nailed above the sink, a tin Americana chicken proselytizes that home is where you lay your eggs; having no eggs to lay, then, this is not Celia's home. During Pickling Attempt 1, Celia thought of strangulation as she tightened the lid. Throttling. Celia's sister, older and more in the mold of their mother, has continued the family tradition of extravagant squandering: she married four times and proudly cheated on each spouse. Celia isn't sure if she will even like pickled carrots: thus far its scent has been wholly unappetizing. The plaid dishtowels are crusted with salt. Celia's mother, in the tub, soaks up all the bathwater like some kind of super sponge. Will somebody wring her out already? Or will she stay like that forever? Pickling Attempt 2 resulted in carrot water the sordid hue of money. The great poet Rumi once wrote, "How long I gotta wait before these vegetables anaerobically ferment already?" Celia's mother never liked oxygen and she never liked water; she swallowed up both, out of spite. This is what it's like to be a daughter, Celia decides, always, always, always the wrong shade of green.

John Tway Zackel's fiction has appeared in the Indiana Review, Third Coast, and others. He lives and writes in Portland, Oregon.