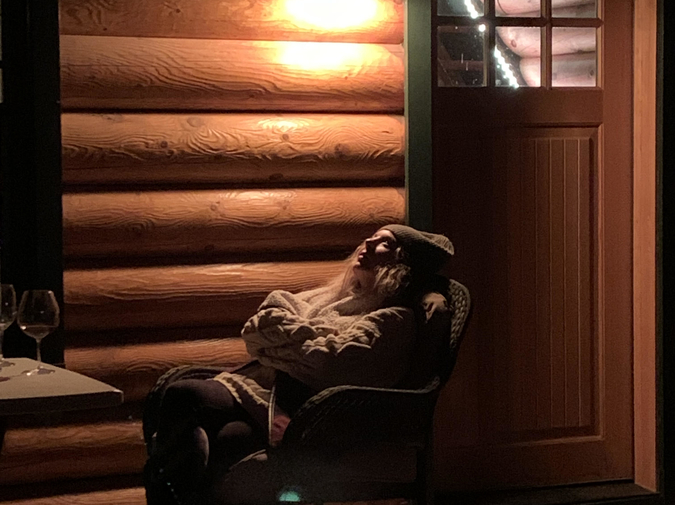 Last night I was visited by a spirit I made out to be my friend Naomi, who in 2016 wisely fled to Canada. In loose form, Naomi said: I’ve been reading your mind. You’ve been sick trying to figure out what happened to irony. With a snap of her fingers it’s 2015, she and I are back in LA, walking our dogs in the summer heat. Spirit Naomi says we’re all set to attend a wedding expo, Lovesick, which defined itself as having a taste for the unconventional, an alternative to all the regular bride bullshit out there. I’m not cut out to be a wife. I know that now, I tell her. She says it promises to be ridiculous.

I’ve made bad decisions before, like LSD was worth a trip into the woods with a man who’d said he lost his identity in an end-of-world battle. Perusing the internet has become my porn, my Nora Roberts novel, which I refuse to surrender. I say this, and Naomi, in spirit form, shakes her head, disapprovingly. I remind her, that really, she’s in Canada. It’s 2020. All bets are off. If Anthony Weiner can unabashedly snap selfies fiddling with his penis, I’m not going down feeling self-conscious about buying trash bags and slingshots from Amazon. The spirit tells me it’s me, my news, that’s outdated. OK. I feel a little self-conscious, but only because in the past I’ve made better bad decisions.

I show Naomi a panorama of 1993. Junior High. I’m riding skateboards, hanging out with gutter punks from Montreal (Canada too, I say), my tongue is pierced, safety pins puncture the skin around my bellybutton, I stalk people and negotiated trades, like weed, cigarettes, lip-gloss (whatever I’d stolen), for taking their photograph. I pretended to be older, mostly getting away with it. The spirit was having none of my vision. Instead, she’s guiding me to a bright Saturday afternoon in Los Angeles, to an alternative wedding expo. My husband-to-be smiled wryly as we departed, “Have fun.” He means it as much as he could have. He knows how I feel about comments that even imply the use of exclamation points. I study him like I’m seeing him for the very first time. For a second I remember life before being evicted, the miscarriage in our bathroom on election night, and before my insomnia, up all hours devising a break from our marriage.

Naomi says it’s time to go. We park and walk over to the sign-in table where overjoyed greeters hand us our free tote bag, “It’s gonna be fun! It’s a tote bag!” I was terrified. Why am I here? I ask the spirit. Because, she says, you pitched Jezebel on a Fear and Loathing at the Expo piece. Don’t worry, she explains, your editor will leave, and the incoming editor won’t respond to any of your follow-up emails. I stuffed the tote into my backpack. Within the expo’s rented space there was another space called The Unique Space, which in 1996 we would have called meta. Naomi slaps me and tells me to pay attention. This alternative wedding had photographers, caterers, event planners, dressmakers to slow-motion video, skee-ball (one of the first redemption games), photo booths, a cocktail bar. Anything unique. Despite Naomi-spirit’s objections, I go to the bar.

The bartender, a Jamie Dornan-type says his company infused their vodkas. “Yeah,” the Dornan-type added at the end of his sentence, landing like a wrapper, hopeless and in earnest like he was about to unlock the Red Room of Pain. I send Naomi a text: Does he know what he sounds like? She takes my phone away. Despite all the unwise decisions I’ve made, I found myself stuck between B“rye”D & Groom, a mix of green apple infused rye, butterscotch tincture, key-lime juice, lime and sour patch candy. Or Rose Lips, a rose infused vodka, muddled blackberry, splash of prosecco, lemon juice, with a white rose petal garnish. And the Til Death Shots. Vials filled with blood orange vodka sold as the answer to the traditional ceremonial champagne toast. Tincture guy clarifies, “And guaranteed to take your wedding to a higher level.” Why not just light your guests on fire? Or blow your grandparents out of a festively decorated cannon?

I turn to freaky form Naomi to tell her all that had come of her timeline experiment was now I wanted to uproot, overdose in the ocean and call it a night. She calls me a dark fiancée, even darker as a wife, hands me cold water and guides me over to a booth of alternative wedding event designs. The most popular event themes, the woman working the booth volunteered, were anything Star Wars, retro, comic book, Jim Henson. In her lookbook were blushing brides in creamy, lacy, long gowns, beautifully manicured hands rubbing R2D2, which could set you back $10,000. All that money made me ravenous. Luckily the spirit was hungry too. Though, were did Naomi put it? I ask her. She licks my face.

Outside, it was easy to find food—there was only one truck. Food perhaps being the most important part of a wedding celebration and here just one vendor selling kale. This event sucked. Kale is fine, but not on weekends. Saturdays are for pizza, bagels, hotdogs. Naomi pulls out a pocketknife and threatens to cut out my tongue, Ovid style. (Jesus—she’s from Ontario.) The spirit asks why it’s so tough for me to see the origin of my unhappiness. She then pointed out that one third of the booths were photo-related. Alternative weddings were also tethered to the traditional wedding photographer, but what made these events unique, were the inclusion of photo-taking machines. If slow motion video was too expensive, starting at $1,400, perhaps check out Drunken Pixel. The baseline, barebones, price for this picture-taking apparatus, minus the props, an assortment of oversized sunglasses, clown noses, Playboy bunny ears, red and blue bandannas—for both the Bloods and the Crips—will run you $1,500. Add Quaaludes, 2015’s alternative to bath salts as Elitedaily.com suggested. There’s the mobile VW photobooth bus with a handmade sequins glitter backdrop to get unconventional in front of. Only $1,300 for 3 hours. Remember the vehicle moves even if the backdrop stays the same, the spirit says, and I repeat after her like reading a fortune cookie metaphor.

I’m in the bathroom, I mind-texted Naomi. I need a break. I’m reading a newspaper article. 18 people in Tennessee were killed today due to hypothermia and road accidents all weather-related.

Naomi passes me a roll of TP beneath the stall, tells me it’s time for 2021, despite my protests, especially now that I recognize the game we’re playing. Plus, 2021 wasn’t much of a leap forward. To which the spirit says, exactly. And tells me to think harder about death before objecting.

I’m on an airplane. It’s one of those big planes that fly to Dubai, and I’m in the middle aisle. The plane is stuck on the tarmac and I need to pee, problematic for various reasons: fears of germs, fears of suicide vests. I take out my gadget to learn about the past year of my life from the latest pictures. I got divorced. I have a parakeet named Triangle. Thinking outside the box appears to be the theme of 2021. Ignoring my body, I begin telling the flight attendant, who’d paused to express interest in my hair dye, about my big plans, about the value of debt, which only the rich get away with, but that I’d planned to take advantage of. My plan for 2021 was to accumulate as much debt as possible, hire young people who know technology, take out as many loans as were available, procure as many credit cards under false names, aliases, in order to live like a radical, or just the high life, like some American bigshot, before offing myself.

“What about the debt collectors? They’re sharks,” the flight attendant was concerned.

I was no longer married. We’d had no children, it seemed from the pictures, therefore there wouldn’t be anyone left, forced to pay the money back.

That said, looking at spirit Naomi, who’d popped up on the screen, I was both thrilled by this idea of living the high life/offing myself possibility, but also deeply alarmed. I miss Nick. I want little Nicks roaming the globe. The spirit tells me it’s too late. I’ve made too many terrible decisions. She asks me if I remember hiring an interspecies communicator so that Nick and I could have sex. I do not. Naomi tells me to return to 2020, when in a fit of pandemic delusional thinking I spent our savings, which wasn’t saying much, on hiring an animal psychic in order to get our dog to stop barking when we tried to fuck. To be honest, I tell little ghost Naomi on the screen, livelier and more forgivable the smaller she was, I didn’t see exactly what was so wrong with that thinking.

“You should have just thrown the dog in the car.”

All the Lovesick attendees were gathered outside to listen to the event’s MC, but he was struggling to figure out how to turn on his mic. Here, drink an IPA sure tastes like you look, I humorously whisper into Naomi’s ear. She did not find it amusing and wondered if I’d learned anything. She gives up and takes me to 2020.

Back at home in bed I feel seasick. I could hear Nick washing dishes. He does this. I think he gets it from his Dutch father. Nick hasn’t any pretensions about being a soft kind of guy. He doesn’t pretend to throw the football around on the beach or kill animals with a bow. He’s OK with making bread from scratch and adding cumin seeds.

“Where have you been?” he comes over to me, pulls my hair from my eyes, says he was wondering when I’d get out of bed and join him in the kitchen. I could tell him about the expo, about the MC’s raffle, while some of us stood, sweating imprints of our thong panties into our tight denim. Los Angeles parking lots were unforgiving, he’d remember. The dark pavement absorbed heat like no other substance. I could make Nick laugh. Tell him the person with the longest beard or wearing two different socks won a t-shirt. Anyone that had on a really metal “I mean metal” bracelet got a metal bracelet. And for the lucky so-and-so not wearing underwear they got their pick of vinyl: Kinks, Bauhaus, Dark gothic, a Ladies Luv Outlaws category, indie stuff, icons and legends. The winner settled on a Cat Stevens record. Wild world indeed. To which the MC pointed out to underwear-less girl, “An awesome story for Facebook!” That wasn’t all. Anyone with a flask would get something. The dude with a Harry Potter tattoo would be worshipped. Any couple with matching tattoos? Nobody? You guys call that commitment!

In recollecting about the day’s events with my spirit friend, I kept coming back around to the giant, the person I was most drawn too, who was wobbling around on stilts and dressed in an Ooogie Boogie costume from Night Before Christmas. I tell Nick about this looming man, and that he’d said, peering down at me, “I also do an evil clown thing.” It was like the stranger knew my insides.

“You can’t make that shit up,” Nick says, bending over to pet our dog. “Not in a million years.”

Nora Lange's writing has appeared or is forthcoming in BOMB, The Believer, American Short Fiction, Denver Quarterly, Joyland, The Fairy Tale Review, LIT, HTMLGIANT and elsewhere. She received her MFA from Brown University where she was a Kaplan Fellow.