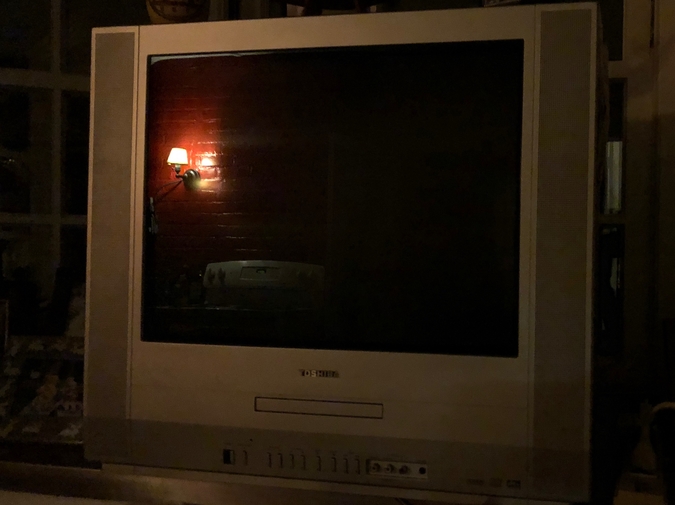 It’s weird at first. The tenants through the wall. Inhabiting what used to be one-half of their home. The clanging pots and toilet flushes, heavy footsteps. The second truck in the driveway beside Vic’s at night. The ache in Heather’s breast whenever the newborn cries.

The tenants make it easier, however. This seven-foot tall garbageman and mousy stay-at-home mom. With their wind chimes in the oak trees. Their muffled laughter and shoes on the mat at the side entrance. Their rent in a dirty envelope stuffed with cash on the first of the month. In this way, after only a couple months, the sound of their living reduces to a common sound. Like the boiler or the old house shifting. Coyotes yapping off in the woods.

Plus, the supplemental income really helps. Money tied up in their fledgling real estate business, as it is. So much so, Heather believes they can afford a vacation. Vic laughs when she tells him. “No, really,” she says, looking over the numbers in a notebook.

But the discussion goes no further, and for a while their lives continue as usual. Heather with the toddler, keeping the books. Vic renovating a foreclosure they’re hoping to flip—a disheveled colonial they purchased for a prayer.

Until one night, after looking over the numbers again, Heather says, “If we do it on a budget, I really think we can swing it.” She appears serious this time. Already purchased the tickets, made arrangements with Mother-in-Law to watch their child, in fact. For a week at an all-inclusive in Puerto Vallarta. Is Vic mad? “Of course not. Thrilled.”

A few days pass. Then a week. Before Heather notices the garbageman’s truck alone in the drive. How it stays there for days, unmoved. While Vic’s off at work. The garbageman inside the house now. With the stay-at-home mom. His hulking presence creaking beams, shaking the walls with the basso sound of his talking.

“I know it’s silly,” she tells Vic in bed that night. “But it irks me. I tiptoe so he doesn’t think I’m home.” To which he tells her she’s being silly, that the garbageman’s a hard worker like they both are, that he’d probably just been coming home for lunch.

But then, the interaction in the garden happens. Heather’s weeding when the garbageman emerges from the side entrance, lingers too long to talk. He smelled whatever it was she’d been cooking for lunch, he tells her. Wonders if she’d give him the recipe. Freaks Heather out.

When Vic comes home, she shows him the deep impressions the garbageman’s feet left in the soft black dirt of the garden. Imitates the way his teeth gnashed up ice cubes of the drink he had with him. The way the tops of his eyeballs showed.

“What do you want to do?” says Vic tells her, a little concerned now. “Kick them out?” No, she doesn’t want to do that. Not over that. She just needs a to get away, she tells him, speaking low like the garbageman might be listening. Only a couple more weeks until our vacation. Thing would be different when they got back.

Then the first of the month passes. “They’ve probably just forgotten,” Vic says. But the envelope doesn’t show up on the second, either. Or the third or fourth or the fifth after that. And with each day closer to vacation, Vic and Heather listen through the wall a little more closely. To the toilet and pots and footsteps. The sounds of them no different than before but made weird again by their listening. To these strangers living in one-half of their home.

The day before the vacation, Vic has no choice but to go over. To stand at the side entrance and knock. He looks through the blinds when no one answers. Finds the apartment dark. He knocks harder. Keeps knocking. And is just about to leave when the stay-at-home mom answers, cradling a newborn in her arms. “I’m sorry,” she says. “I was sleeping. Come inside.”

She starts telling him about a clogged drain as he enters. The bathtub keeps filling up, she says. The garbageman has been working, hasn’t had a chance to fix it. Would he look at the drain while she fetches the rent from the drawer? He nods, relieved. Of course.

The drain isn’t clogged, however. Not even a little. The stay-at-home mom doesn’t even inquire about its status when she enters the small bathroom behind him, either. Just pins him there. Starts talking. About the garbage man. No envelope in her hand that Vic can see. Bouncing the baby on her hip. About how he’d left her after getting fired and relapsed. How he was prescribed something. An upper. And it wasn’t his fault. Caused him to relapse, she says, tears in her eyes now. Used to be a drinker. A good man now. Hardworker until this slip up. He’ll come back, she tells him. He always does.

Then she stops talking. After which, it takes Vic a few seconds to realize that she’s posing a question. That her problems are now on him. And thinks about this a moment. He thinks longer than he should of. Until something like hope catches her crying eyes. Before he says what he must.

Next morning, Vic packs his luggage. Shorts, flip-flops. A Xanax wrapped in a tissue for the flight. Another Xanax in his mouth to staunch the worry Heather instilled last night.

“You should have waited until we got back,” she said after he told her what he’d done. “I thought it’d be better to get things moving,” he said. “What if he comes back?” she said. “To do what?” he said, to which she started listing offences: Concrete down the pipes, paint thinner in the well, holes punched in the sheetrock, copper wires ripped from the wall until he said she didn’t need to continue.

On the plane, he drinks a double scotch and unwrinkles the Xanax. Breaks off half for Heather who’s unscrewing a plastic bottle of white wine. Glugs his down. They agreed not to discuss the tenants anymore, but the silence does it for them. They don’t hold hands or watch the movie. Out the window, the clouds are a low, flat grey wall. Heather doesn’t even finish the Sudoku puzzle in the back of the in-flight magazine before the plane touches down.

As they step into the blinding x-ray light, a line of taxi drivers jockey for their fare. Of which, Heather selects the most desperate: a small man with a scar on his face who then drives them through small towns so far gone Vic wouldn’t even know where to start renovations—the thin, dilapidated walls, crooked roofs of corrugated steel. Barb wire fences and gutted cars. The taxi driver points at a clump of them and tells them he lives there in broken English. With his wife and child. Too many people to fit, he says. But we manage. Before offering them beer from a cooler in the passenger seat for an inordinate price.

Once inside the resort’s gates, Heather pays the driver, tips him a substantial sum. While a child scurries out of the shade of a palm tree and into the dry heat to fight the luggage from Vic’s hands. Struggling to balance the largest suitcase on his head, he then leads them to the front desk in the open-aired lobby where a woman with a roan tooth gives them wristbands and shots of tequila, which they accept. “Everything’s included,” she says. “Except for the Jet-skis. Those are an upcharge.”

As the bag boy leads them to their room, he kicks Iguanas out of the way. Drops the luggage on the king-sized bed, for which Vic tips him. Waits for him to leave while the AC mutters on the wall. But the bagboy remains. Lingering bashfully almost. Before producing a small baggie of marijuana from his pocket, which Vic buys out of pity. With Heather disrobing in her bikini behind them, thinking the bagboy had already gone. Oblivious and naked before his small, dark eyes.

Once in the pool, Vic and Heather wade to the bar. The green over-chlorinated water undulating around them. As they order margaritas, perched on seats submerged in the water beneath the cabana, talking little. Then order a second round, talking a little more. A third while they watch a fleet of jet-skiers crosshatch the horizon. Neither has drank much since having their child or put anything in their stomach since breakfast, and they become drunk rather quickly. When Vic reaches into his pocket to tip the bartender, the small baggie of marijuana falls into the water, floats off. And he waves at it, laughing. “We should probably eat dinner,” Heather says.

They hold hands while they enter. Stand close while they shuffle along the sneeze-guard of the buffet, piling plates sky high like the other vacationers. With tamales and spaghetti, dinner rolls. Sushi stuffed with cream cheese. Whatever they can fit. While they eat, a waiter darts in and out, offering more tequila. When Vic accepts one, the waiter leans his head back, drapes a napkin over his eyes, and pours some down his throat before taking his head in his hands and rocking it back and forth. “Boom, boom, boom,” he says until Heather begins laughing. “Do it again,” she says, wanting a photo.

Afterward, it’s sunset. Late jet-skiers skip across the purpling water. In the distance, Samba music echoes. A small bandshell stands off near the beach before which people appear to be dancing. The trail clear of Iguanas now while Heather drags Vic toward it.

On the dance floor, couples in floral prints sway awkwardly. Heather and Vic join them. A tall, handsome man goes around giving lessons. When he works his way to them, he pushes their crotches together, says nothing else. Leaves them like that. Swaying. Back and forth. A heat rising between them. As the stars emerging overhead. Jet-skiers still skipping. The earth rotating over the horizon with the dusk. With Heather's cheek on Vic’s shoulder. The perfume of her hair filling his nose.