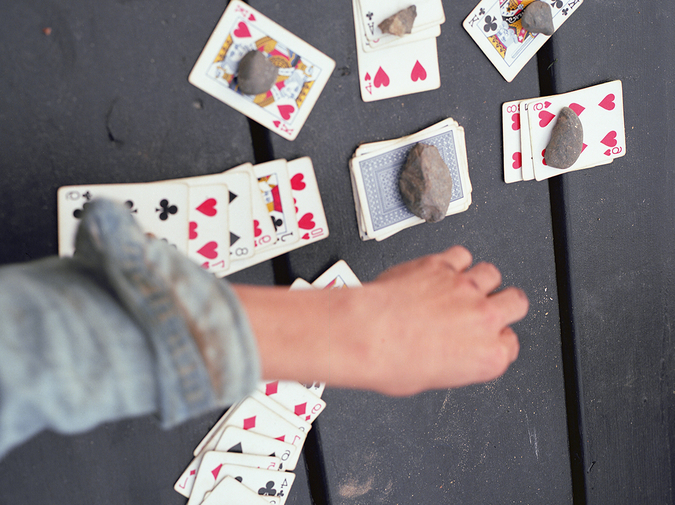 In January the birds awakened mid-
flight. In February the bats left
their cave and we called it abandoned.
In March a civilization arose
and fell. In April a ream of gauze
unfurled, masking my face
in muslin. The holes became thinner.
In May I learned to breathe.
In June a massive anvil was placed in
the town’s center, where a blacksmith
pounded my face into the shape of a metal
disc. In July the metal became a container for fire.
In August I splintered into a thousand.
In September I was born to a couple
who had not made love. In October
another civil war. In November I began walking.
In December flocks of angels dropped
from the sky like moths. In January
I returned, shaking.

I watch branches land
a quarter of the room

from my face. The rush
of wall breaking as

Soon after the war,
when missiles reached

through windows
and we watched

through the black and white
crosshairs on our screen.

Now it is our house
that shudders. Here

to witness, I’m thrown
back from the wolf-

I played with, never
thinking, who

watches? I gaze at
the room blown open,

the television’s face
shattered on the floor.

the god of madness

is riding me, my back a saddle.
i want to hear his voices spasm.

o god, pull me by my leash-tongue.
inscribe your name with a penknife.

can i be me and not? both
the thorax and the mirror. both

the teeth and the gun.
his blood my blood, my blood his

hymns of light pouring
from the toppled vase.

i watch him rise, scrambling
to button up his skin.

if there's an exit, let it lead
to another door.

Isaac Ginsberg Miller's poetry has appeared or is forthcoming in journals such as Callaloo, The Collagist, Colorado Review, Sonora Review, The Shallow Ends, Tupelo Quarterly, and Vinyl. His chapbook 'Stopgap' won The Sow's Ear Poetry Review Chapbook Contest, and is forthcoming in 2019. Isaac earned an MFA in poetry at NYU, where he was a Goldwater fellow. Additionally, he has received fellowships from the Callaloo Creative Writing Workshop, the Blue Mountain Center, and the Ragdale Foundation. He is currently a PhD student in African American Studies at Northwestern University, where he is also a member of the Poetry and Poetics Graduate Cluster.