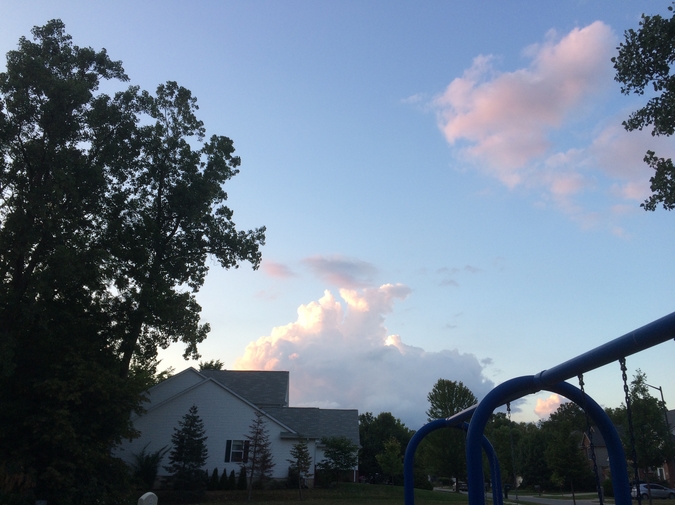 At midnight, I eat
Himalayan salted caramel
coconut milk ice cream—
I admit it is with a spoon,
out of the carton,
standing up, an exclamation
mark elbow punctuating
a lean against
the kitchen counter,
quick and messy,
entirely lacking grace,
an aim towards
simple fulfillment
but it’s silent here
and dark, the moon’s
bright face only shining
over me—I recall
my mother in a pink bathrobe
saying it doesn’t count
if you’re standing up
and it really doesn’t count
if it’s a single spoonful—
a mound of dark chocolate
in that silver bowl—
morsels like her usual
portions but this one
sinful. Her, licking
fingers of a night time
sweetness,
closing the freezer—
a small door leading to
that saccharine release
of control.

This is the campfire that mocks the sun—
the breakdown fallapart escape
of my mother. She cascades
from the container of my father’s mouth—
dust & gold pendants, prayers etched
on their falling faces—clattering—he says
we are safe here
because it’s all broken
already.
My father and me and nothing to lose.
I think the sun’s been out-shone,
lost its arrogance and nothing
is remarkable now but us
still breathing. He picks up a pendant,
tries to murmur a prayer in the new silence
between us—instead—he says
Daughter, I can hear her burning
so far away and us, here, gray.
We build a new space inside darkness—
finally, we can hold it in our palms scraped clean
from sorries. The only light, a distant fire—
we let it go & go. Father, I feel so
motherless, growing larger than I thought
was possible to grow into this body
that I don’t know how to inhabit—he says
I could try to be more for you.
I could try.
We lie here together, gold in charred hands,
pulling the ash from each other’s hair.

These days, I find myself
driving at sunset but heading east,
away from the main event,

doilies, the pilling fabric
of decay, lolling from
my mother’s cold fingers.

This is when I think of her—
past waxing pink, a fossil
framed on all sides.

Here, when she speaks,
it’s the same monologue of rabid foam.
I regret that the tape remains

unbroken, that I still give weight
to words, spindles in her speeches
glued unforgivable to each

of my double helix, a whole language,
an identity, unique to us
which I’ve learned and lost

as it hardens to a tough calcium salt.
I’m not strong enough yet
to scrape away what is hardened,

to grind the mineral from my teeth,
to tune out the chatter spewing
from the rearview

into my sightline, my mother’s
flickering tongue. Behind me,
the clouds morph further

into knee bruises,
battered fingers reaching
for one last smoke.

Behind me, now, I see myself
gulping, words making
less sense than before, building

a new language all my own
in the darkness ahead, syllables
pointing indigo, pointing east.

Dana Alsamsam is a queer, Syrian-American poet from Chicago and an MFA candidate at Emerson College. She is the assistant poetry editor at Redivider and editorial assistant at Ploughshares. Dana's chapbook (in)habit is forthcoming from tenderness, yea press and her poems are published or forthcoming in Poetry East, L'Ephemere Review, Blood Orange Review, Bad Pony Mag, Oxidant Engine, Cosmonauts Avenue, Luna Luna, The Collapsar and others. She was recently nominated for a Pushcart Prize.