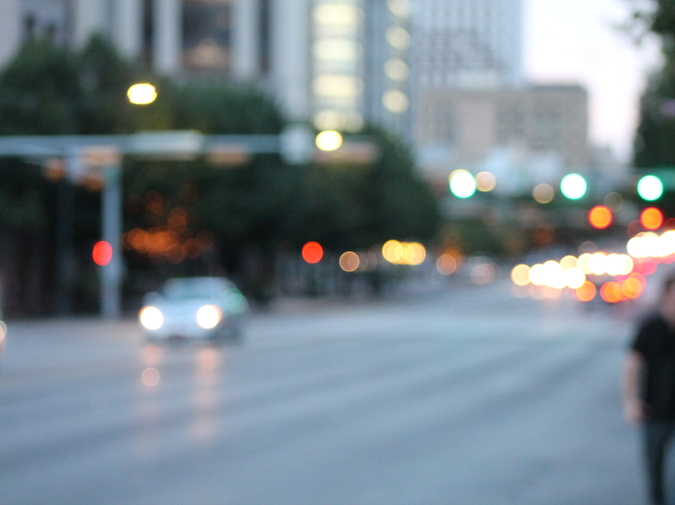 Orbital mechanics, really.  The motion of this body, any body to the constant pull of the George Washington Bridge, its star-lit tollbooths.  On the Henry Hudson parkway, dead leaves move like lost children.  Reluctantly they share the stale air.  For all elementary particles, X is true.  X is most likely decay, or the loneliness of separation from this atomic life.

It’s natural to find yourself in the background radiation, or to understand relativistic speeds in New York traffic.  The exit ramp considers the nature of a single dimension.  I consider the narrow chain of cars pulled through city parks like kite-string.  In linguistics, mora is a single unit of syllabic weight.  I consider yelling at the yellow cab to add more syllabic weight to my overall point.   I remind him that mora has no etymological relationship to mores, our simple ways, or virtues, or values.

The small man has no mores.  I think, perhaps, I can handle no more.  The woman at the tollbooth takes my small change, and my large bills.  She licks her fingers as she counts each folded corner.  She stares at me as if I were her one-millionth customer.

Vorticity.   Any city, really, where trees curl in sucked smoke.  The street artist’s tendency to spin within a fluid stroke; the circular breath of geese, weasel, well.  Standard models for a Sunday.  Rigid rotational axis.  Potentially, all of this is merely colloidal: substance perfectly distributed in substance; dispersal hidden within the continuous.

This stigma carries no weight here.  Values bound by ligature only; the connections we form in sixty watts of cursive light.  Our newspapers lack digammas.  The names there only acrophonic.  Front-page editorial: we’ve all become so diacritical.

There’s little of the nothing to be said.  And yet.  And yet again.  Proof, with its symbols and parenthetical statements like a scored seed; plant that hugs the stone wall.  To have shadow, you need light and a lack of light.  This is not important.  A man thinks he must roll the stone from her eyes; open the door and breathe beneath the breaking waters.

He believes these beautiful things.  A young boy climbs the hill next to them.  The boy doesn’t speak, only watches with eyes that seem to grab at the man’s beard like tiny fingers.  It’s the red of Stonecrop flowers, or Barrenwort’s dark spikes, almost purple in the sun.  The man dreams it will be white someday.  This is about pigment: the carbon filling the water in ink; the body which has no ink at all.  This is what the body is: soft, the curve of the iliac crest; the tiny brown leaf above her nipple.

He imagines a bonfire: its heat moving beyond the coals’ red beard; slow melt of silence in its corona.  The hair on his right arm genuflects like lines of the faithful.  Sanctus bells ring in the background, hidden safely beneath a white and ornate chair.

There’s nothing written about the end: the arc of this wave settles and is settled.  For the moment, it seems water is only cut glass: a brief sketch envisioned; a brief sketch etched.  He wonders how close to the heart the knife goes; what happens to each discarded sliver.

Matthew Minicucci is the author of the chapbook Reliquary (Accents Publishing, 2013). His work has appeared in or is forthcoming from numerous journals, including The Gettysburg Review, The Southern Review, The Journal, Hayden’s Ferry Review, West Branch, and Crazyhorse, among others.He has also been featured on Verse Daily.  He currently teaches writing at the University of Illinois at Urbana/Champaign.