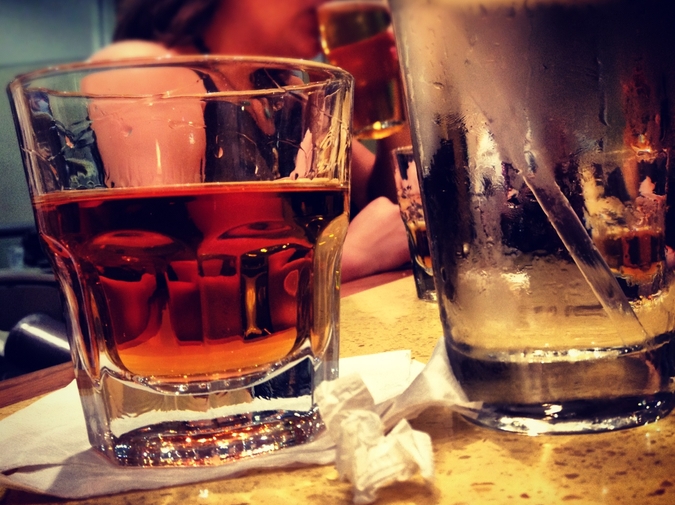 On the jukebox, a quarter buys fifteen plays,
enough time to remember
I once crash-knuckled sheetrock
to prove commitment,
to disprove weak bone structure.

Here’s a country song
stitched together with twangs
and dead Labrador,
hit and run on a farm road, another heartache,

and you’re in a corner booth counting cautions
with your index finger over
a dark amber beer bottle’s mouth.
Point of fact, I broke my hand and lost her.

Puddles form in a mind, midwives for mosquitoes—
a train claps steel past a church,
under a hunter’s moon. I’ve taken my best crow-hop,
slung gravel like warheads at that train,
slept to its stillborn ricochet.

And what song will you play tonight?

What ruthless vision
held inside a bottle’s
ring of condensation
abandons itself on your table
like a throw-away halo?

Take solace in a trench of busted seam
crawling the backs of your legs, watch

every song, their images sintered
under the heat of neon Schlitz signs.
And now one clatters on about chickenfeed
and regret, now your thumb
along the bottle’s body, up and down.

You are a child finally reaching the light switch.

They’re only songs,
only someone else’s failure to act,
sour old peaches
rotting on a panhandler’s chopping block.

Give me a knife.
It’s Sunday and I’ve a mind to
see your insides.

I could spend days scouring galaxies
of used bubble gum constellations
on the underside of this table,
watching your hand over and around that bottle.
Its label picked clean as a scab’s bottom.

The Reason He Played That Song On The Jukebox

Because she played it once
when the radiator decided Hickory Flat,
Mississippi was far enough. Because
the rest of the room will define
him by how he spends a dollar.
Because silverbells were in bloom, and he
showed her the claw marks of a bobcat
on the trunk. When she fell asleep
beside the fire, he made up a fable
for every tinder. Because a friend

told him he should
find God. Because he’s already
seen the entire list of songs
seventeen times, watched black slats
collapse onto one another and erode
again. Because Mud Island
isn’t really an island. Because
Grace was her grandmother’s
name, and her house smelled
like old linen and bullets. After
the funeral, he’d made love to her
there in Grace’s old study while
the family traded tales and ate the meats
without a thought. Because

it’s track number
two. There’s only him.
Because sharks mate
by just passing for a moment
before separating forever and
because his dog died,
and so many truths died
with him. Because he watched her
make a grilled cheese sandwich
that November with nothing on
but his t-shirt and this song.
What color was his shirt? Because
he was sure she’d say it back
in August of 1994 with a full tank
of gas and a flat tire, as he laid
his chest on cooling pavement,
the sounds she made just
because and he runs a damp
palm over the scar.

In the event that our special handshake
becomes lost, I’m writing it down today,
practicing in my pocket. Knuckle-palm-knuckle
was always about the memory of a thing—
slow-moving fossils on a duck boat tour
snapped pictures with us in them,
accidently, and today we remain suspended
on some hand-me-down Ozark coffee table
in a silver trimmed, wood grain single-wide,
laughing to the chorus of Hawaiian shirts.
A stoplight in Branson, Missouri—
you in the passenger seat,
writing our names backwards on an envelope.

Chris Mink is currently a PhD candidate at Florida State University.  His work has appeared in The Greensboro Review, The Chattahoochee Review, and Anti-, among others.