Things in my room: Shrine 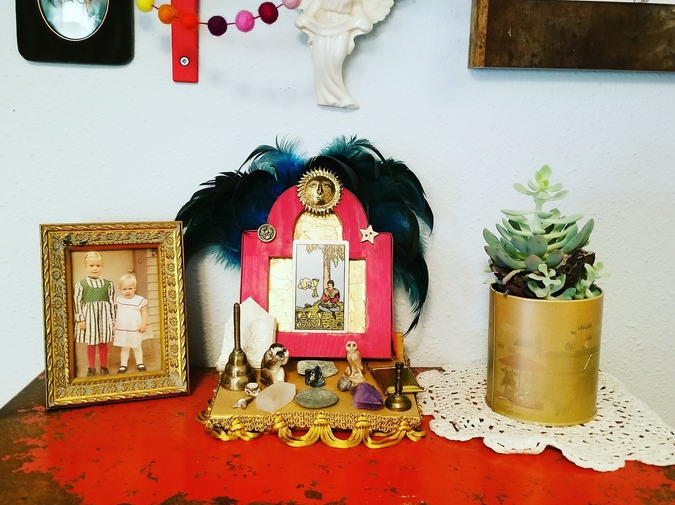 I made the shrine at a shrine-building workshop on the West side of Portland several years ago. This isn’t the kind of thing I normally do, but I’m proud of how the shrine turned out.

When I moved into my current home, I set up the shrine on top of my dresser and placed some meaningful objects in front of it.  There’s a piece of tile my friend July gave me, a little monkey figurine from Lorraine, a crystal from Halle, another crystal from an ex-boyfriend, and a couple ancient shark teeth my grandmother dug up from the deserts of Eastern Oregon.

Right after I made the shrine, I went through a period of about a year where each day I would shuffle my deck of tarot cards and place a card on the alter and meditate on its meaning…what it had to do with my day, my state of mind, what was going to happen in the next day or week or year.

I’ve had mostly positive experiences with tarot cards. I’ve had a few professional readings, but mostly it’s just been me and my friends, helping each other with questions about our love lives, family relationships and creative endeavors. Getting my cards read has always been helpful –  it’s helped me see outside of myself, look at things in a different way and pave a path towards resolution.

But then I stopped drawing a card every day. I didn’t notice that I’d stopped, I just did. One day I looked up at my shrine and thought: hey, there you are. What happened with that routine?

Then I remembered: I’d met a photographer with bright blue eyes and we went on a date. There were a lot of red flags with this man, but I was so excited that I’d actually met someone in real life that I ignored them.

One night we texted back and forth while he worked a Blazer’s game. I just happened to be watching the game with my roommate and I could see him crouching on the sidelines in a black t-shirt. It seemed magical, a chance meeting, like something out of a romantic comedy.

Maybe this had been my problem, I told myself. Maybe I’ve been doing it all wrong. Maybe meeting someone in real life will turn out better than meeting someone on a dating site. Maybe this is a sign: I’m open and happy to the possibilities of the universe and this is why I’ve met this man now.

We decided to hang out again.

The morning of our second date I drew a card – now I can’t remember which one –  but the meaning of the card was LOVE…that, I do remember. I was overjoyed. Despite my misgivings about this guy I’d randomly met, this seemed fortuitous.

That night the photographer seemed nervous, he told me too much about his past relationships. He was fidgety. He kissed me badly. I didn’t like it at all.

The next day I texted him and told him I thought it would be better not to see each other anymore. I looked across the room and noticed the tarot card on my shrine. I remembered the terrible kiss. A shudder of disgust ran through my body. Fuck those tarot cards, I thought.

It reminds me of the time, years ago, when I went to the beach with my mom, my sister Ana, and her three kids. On a trip into town to buy firewood, Ana bought a lottery ticket from the Safeway kiosk.

“I had a few extra dollars from the firewood money and the jackpot is enormous,” Ana said, explaining why she’d bought the ticket. “But now we have to decide how we’re going to spend the money if we win. I think we should give some of it to a charitable cause.”

We argued for almost an hour about who we were going to give the money to. Things got heated. I wanted to give it to homeless youth in Portland, Ana thought we should give it to kids in a third-world country. I don’t remember what my mom said. The next day, of course we hadn’t won the Powerball jackpot after all. I was so disappointed that we’d spent so much time arguing over nothing. So much emotional investment.

“This is why I hate playing the lottery,” I said. “You get your hopes up and then you never win.”

“Thinking and talking about how you’re going to spend the money –  that’s the fun part,” Ana said.

I don’t remember what I said. I probably grumbled something under my breath about stupid arguments.

Outside of carnivals and circuses they often advertise “Fun and Games”. As if fun were a thing you could purchase or hold in your hand, take home, and put on a shrine. And people often use the phrase “Fun and Games” to indicate that something shouldn’t be taken seriously.

As it turns out, the word “fun” actually comes from the Old English word “fonnen” which means to “befool” or trick. In essence, a sign that advertises “Fun and Games” is basically advertising trickery. Come in and be tricked! Let us dazzle and befool you!

I do think some lies are harmless fun. Tarot cards, astrology. They’ve never really hurt me. I haven’t spent thousands on dial-up psychics or the slot machine. I haven’t had my heart broken trying to reach in and touch the mysteries of the universe.

But I do think that new love is always a trick we play on ourselves. That we play on each other. I think I would play that game. It would be nice. But is it silly to be angry when the trick falls apart? It was always just luck, right?

I guess I’m ready to start drawing cards again to put on my shrine. I don’t know why I do it. I do know that I like shuffling the cards. I like cutting the deck, the ritual of it, the repetition. I know that I enjoy the anticipation and the surprise of each card. What is it going to be? I ask myself. What is the universe going to tell me today?

The card I drew today was the Four of Cups. Its meaning is disgust, aversion. It’s a card of blended pleasure.

Martha Grover is the author of two memoirs: One More for the People and The End of My Career (Perfect Day Publishing). The End of My Career was a finalist for the Oregon Book Awards in creative nonfiction in 2017. Her work has also appeared in The Collagist, Vol.1 Brooklyn, and The Portland Mercury, among others. You can find more of Martha's work at Patreon.com/marthagrover