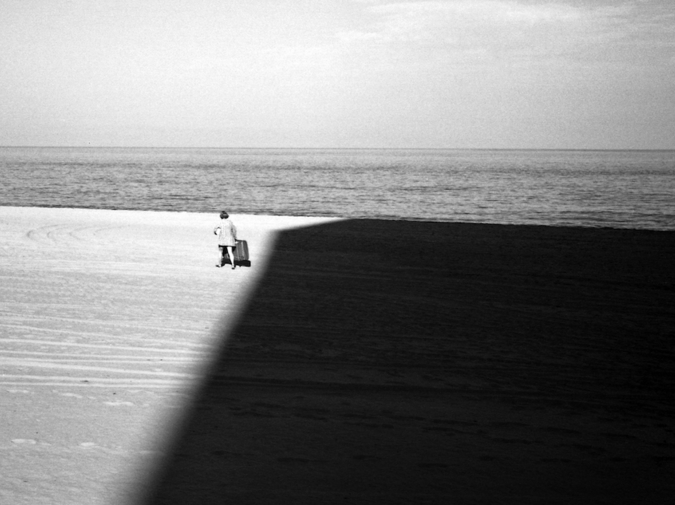 “You didn’t tell me it was a nude beach.”

“All the beaches here are nude beaches,” Ilze said, as if that explained everything.

It was only ten in the morning, but the beach was already crowded with limbs.

“I’ve never been to a nude beach.”

“You don’t have them in Virginia?” Ilze asked, removing her top.  Pēteris, her boyfriend, had already stripped.  I tried not to look.

Pēteris grabbed our things and lugged them down to the beach.  Ilze removed her jeans.

“Is it alright if I wear my swimming trunks?” I asked.

Ilze gave me a sidelong glance and laughed.  “Only if you want people to think you’re – how do you say in English – izvirtulis?”

I didn’t need a dictionary.

Earlier that morning, Ilze had told me that, for my last day in Latvia, she wanted to take me to the beach.  There was a place, she said, where the Gulf of Riga meets the Baltic Sea and the waves intersect at right angles.  We cleared the dishes and packed a basket with bread, cheese, and fruit from her parents’ orchard.  Ilze added a bottle of wine and three cups.

I was, of course, in love with Ilze.  She was the most beautiful woman I had ever known.  She was also smart as a blade.  We had met in England, where I was studying evolutionary biology and she was doing a fellowship in EU law.  Our friendship was struck the night at the King’s Arms she told me about her problems with her boyfriend.  Apparently I was the first man who didn’t attempt to seduce her afterwards.  I guess I’m good about that sort of thing.

At the end of Trinity term, Ilze invited me to spend a week in Latvia.

“This is the way to the beach?”

Ilze had turned off the highway onto a straight dirt road.  On either side were the junked remains of Communist-era cars.

“No,” Ilze laughed.  “This is where Pēteris lives.”

I paused.  “Pēteris is coming with us?”

Ilze had often complained about Pēteris’s lack of motivation.  Once, when I asked her what he did for a living, she replied, “Collecting motorcycles.”

One night, at the King’s Arms, Ilze had suddenly started crying, taken my hands, and told me about his affair with a high school student.

“Because he loves me.”

“He doesn’t deserve you,” I said.  “You can do better.  Find someone better.”

I wanted to say that but never did.

Ilze and Pēteris had met me at the airport when I arrived and taken me to dinner.  We tried various local dishes.  Every time I said something to Ilze, Pēteris grunted.  That was apparently Ilze’s order to translate.

The day went downhill fast.  At Pēteris’ house, I learned we’d be traveling the rest of the way to the beach by motorcycle.  I also learned I’d be riding behind Pēteris.  Pēteris had taught Ilze how to ride, but she didn’t feel comfortable having someone ride behind her.  At least that’s what she said.

The ride to the beach lasted thirty minutes.  Pēteris took the lead.  I didn’t like the idea of Ilze watching me cling to her boyfriend.  I bet I looked like a snail on a rock.

I had played the third wheel many times, and over the years I have come to embrace the role.  But playing it on a nude beach was a new one.

After we set our things down, a question arose.  Where exactly did my towel go?

As Pēteris rubbed tanning lotion onto Ilze’s back, I ran through all the possible towel-combinations.  None of them seemed right.  On the one hand, I was their guest.  On the other hand, they were a naked couple.  Pēteris had probably been hoping I’d fall off his bike.

I asked Ilze if I could go for walk and look at the dunes.

Latvia’s Baltic coastline is almost completely undeveloped except for a few fishing villages and some dilapidated concrete resorts for Communist Party officials.  A forest of black pines begins right at the edge of sixty-foot dunes.

I had long passed all the naked people when the sound of laughter spilled from the pines.  Suddenly a naked woman burst from the trees.  She tumbled down the dune, scrambled to her feet, and ran laughing toward the water.  Then a naked man even bigger than Pēteris burst from the trees.  The woman screamed and began running in lopsided circles.  It was a love-chase like the ones you sometimes see on antique vases.

After the woman spotted me, she steered toward me and crouched behind me, laughing.  Her lover came after her.  He stood right in front of me making ape-like noises.  It was impossible not to notice his state of semi-arousal.

Then the woman made a run for it.  She actually pushed off my back and ran down the beach.  She made it about twenty yards before her lover tackled her.  That’s when they started having sex.

I think the second realization was triggered by something I had seen the previous summer on a trip to the Galapagos: a blue-footed booby with pale green feet, weakly spreading its wings to the sky long after mating season had ended.  Our two guides had chuckled.  Now, watching the sex happening right in front of me on the hard sand, I was certain this was what natural selection must actually feel like.

Richard Johnston is an assistant professor in the Department of English and Fine Arts at the United States Air Force Academy in Colorado Springs, CO. He received his PhD in English from Harvard University in 2013. This is his first published story.