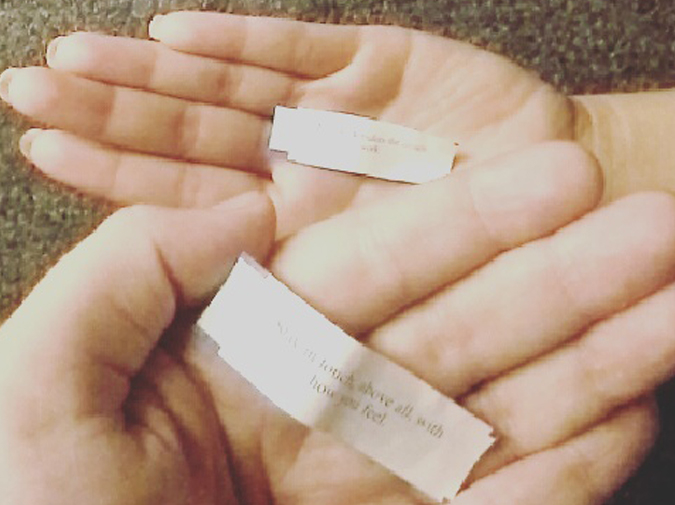 When I was 27 I moved into my older sister and her husband’s house in the suburbs of New Jersey. My brother-in-law Jimmy got a new job and was going to New Mexico for job training for three months. Kim, my sister, was pregnant with twins and wanted company in her home while he was across the country. I was ecstatic when she called to tell me the news about her pregnancy, his job offer, and the invitation to move in with her. I was living in a lonely apartment that had just been sold and I needed to find a new place to live. After my nieces were born, I stayed in the finished attic they’d turned into my bedroom for a few years longer than anyone anticipated I would.

As a houseguest, I sucked. I acted like I was doing them a favor by living there, but in reality I would have been destitute without their hospitality. I spent almost every waking minute in my cave of a bedroom eating. Before I’d moved in, the attic was tidy and pretty much empty. The room was small, with sloped ceilings and two windows on either side of the room. Once I settled in and got comfortable, I turned the attic into a hovel.

One day, Kim asked me to please remove the bath towels I’d hung up over the windows as make-shift black out curtains.

“Because I don’t want the neighbors to see towels hanging in the windows when they drive by,” my sister explained.

“Why do you care what your neighbors think?” I asked, but I took them down that afternoon.

Kim hardly ever asked me for anything, and I didn’t want to push it. I also didn’t want her doing it herself, because then she’d come in my room. I didn’t want her to see the dirty plates, silverware, empty fast food containers on the floor and bottles of diet coke lining my bookshelves. I don’t know how much weight I gained when I lived there—I couldn’t bear to get on the scale or look in the mirror. All I knew was that every six months or so I’d have to buy bigger clothes.

One afternoon, I walked into the bathroom, sat down on the toilet, and heard a sharp cracking sound while feeling an excruciating pinch on the back fat of my thighs. I stood up and saw that I had broken the ceramic toilet seat. I stood there, in silence, staring at it. Then I went downstairs and used the powder room on the first floor.

The next day Kim said, “You need to replace the toilet seat.”

I didn’t ask her how she knew I broke it, and I didn’t deny it. I just said, “Okay,” and returned later that evening with a new seat. I usually lied about everything I was confronted with: stealing food from her pantry, taking her earrings without asking from her jewelry box. But this was something I didn’t have the energy to lie about, and she had the decency to never bring it up again.

If a time in my life existed where I wasn’t obsessed with food, I have no memory of that life. When I was a little girl, I ate so ferociously that my mom policed every bite I took. Sometimes she would catch me either sneaking out of our pantry, my hands filled with Cheez-Its.

“Why are you eating those?” she would ask me.

Why do you buy it if I’m not allowed to eat it? I would wonder, but never have the nerve to reply. My parents also struggled with their weight- my mom as always counting calories. My dad rarely tried to lose weight even though I sensed he was uncomfortable with being heavy. He and I were very similar that way.

In our household, my family kept secrets from each other all the time. I would catch my mom off guard as she was going through her credit card statements, and she’d take the bills and shove them in the pockets of her jeans when she saw me enter the room. “Don’t tell your father!” she’d hiss. Many evenings before bed when I thought my parents were in the den watching Law & Order I would tip toe into the kitchen for extra cookies and I’d find my dad spooning peanut butter or ice cream into his mouth. “Don’t tell your mother,” he would say quietly after he swallowed. I never did. We were the same, we lied.

Because we were liars I’d feel betrayed when they’d critique my body, or question what I’d order for dinner at a restaurant. The heavier I got as a teenager, the more frantic they sounded when they tried to give me advice about diets. By the time I was old enough to drive and get as much food as I wanted on my own, eating became the love of my life. I baked trays of brownies and demolished them in an afternoon. I would always accept invitations to happy hour, relishing the social acceptability of pigging out in public. I would eat chicken wings and mozzarella sticks and nachos with pints of beer, and I would feel such relief when my girlfriends would declare while their mouths were full of food, “I am such a heifer!” During my daily trips to fast food restaurants, sometimes I’d pretend I was ordering dinner for a large group. Alone in my car at McDonald’s I’d order several extra value meals and, when I got to the window to pay, I’d say to the person manning the register, “Can you throw some extra napkins and ketchup packs in the bag? I’m bringing this home to my family.” Most of the time, I ate by myself. I felt the most comfortable alone in my dark apartment, where I ate cartons of ice cream after greasy Chinese food. I conceded that I was addicted to food because I ate everything and anything I wanted, all the time, every single day.

In passing years I asked myself questions that most people don’t have to ponder: When I got escorted off the platform of the roller coaster, did my brother-in-law believe me that I was too afraid to ride it? It was the 4th of July, and I went with my sister and her family to a carnival. My nieces were two years old and going on all the kiddie rides, and I watched them happily enjoy themselves on the same rides I loved when I was a little kid. As we were leaving and headed towards the parking lot, we passed the roller coaster.

It was one of the smallest roller coasters I had ever seen: there were only about ten cars on the track and the entire ride looked like it lasted less than a minute, but I was excited to go with my sister on the ride. We sat down in a car built for two waiting for the ride to start, and watched an attendant go from car to car, making sure the security bar was intact across the laps of everyone seated. When he got to our car, he pressed the bar down against my stomach, but it didn’t click into a locked position.

Under her breath, my sister murmured to me, “It won’t go down?”

“Um, I don’t know,” I said to her louder than I wanted to, embarrassed.

The attendant looked at me, concerned. “Want me to try again?” he asked, and I agreed to let him even though I knew it wouldn’t close.

“Can I just hold it in place across us?” I pleaded.

“No ma’am. I’m sorry but the ride won’t even start unless all the cars are secure. It’s a safety hazard. Trust me you wouldn’t want to ride this thing unsecure.”

Trust me, I’ll take my chances, I thought. Getting thrown from a moving roller coaster sounded more appealing than having to get up and walk off the platform in front of everyone watching. As I walked back toward the parking lot toward my brother-in-law and the kids, I told Jimmy I was too scared to stay on.

I shrugged and tried to look casual.

A few minutes later my sister joined us and we left. I knew she’d keep what happened on the ride between us. “You didn’t miss anything,” she said to me in a protective voice, “That ride was lame.”

Lauren Grabowski is a nonfiction writer. Her work has appeared in Talking Writing and The Scold. She lives in Montclair, New Jersey. "The Weight" is an excerpt from a longer essay. Tweet her at @laurensprose.