The Truth Always Wants to Be Told: My Struggle with My Struggle, Book 5 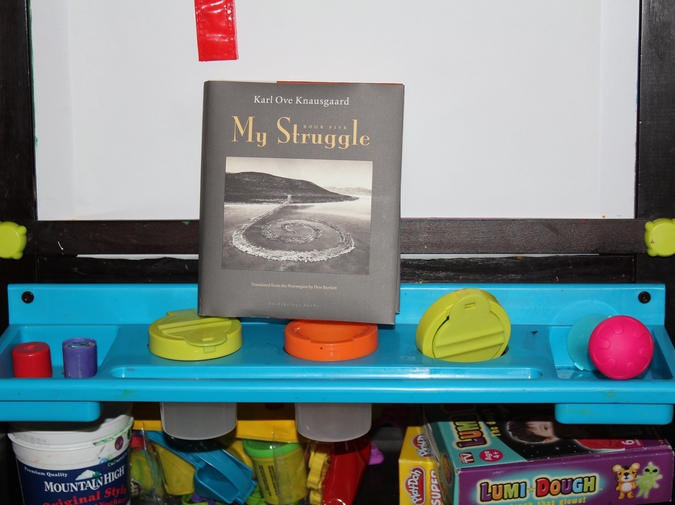 So much of the press I read about Karl Ove Knausgaard’s My Struggle highlights the book’s popularity in Norway, where half a million copies have sold in a country whose population is only five million. In America, it seems the only people who are buying and reading Knausgaard’s books are writers and would-be writers. I have not, for example, spied anyone on the subway (or anywhere else in New York City) reading one of the five volumes now available in English. Other than my older brother, a writer, I haven’t been able to engage in a real time (i.e. non-internet-mediated) conversation about the books, either. My wife, noting how I experienced a “book hangover” every time I finished one of the My Struggle books, asked me if she should read them. “Would I like them?” she specifically asked. To which I quickly answered, “No.” When she logically, and with a bit of hurt feelings, asked why not, my answer again was quick: “Because you don’t write, and because it would irritate me if you called the books boring.”

If writers and aspiring writers are the only ones reading My Struggle, then they will particularly love Book Five, which chronicles the ten-plus years Knausgaard spent in Bergen as a middling university student and insecure writer. He devotes page after page to the experience of having his writing discussed in workshop, and he even gives us glimpses of his early, embarrassing attempts at fiction, poetry, and song lyrics. A classmate accurately accuses him of plagiarism, and he drafts (but, fortunately, does not submit) a poem that is just the word “CUNT” typed out, over and over, across a two page spread. In these Bergen years, beyond struggling with his writing, Knausgaard also plays a sloppy and violent drunk as well as a lousy boyfriend and unfaithful husband. He divulges that he tried on these latter roles, in part, because they felt like the kind of roles a writer should play.

Knausgaard claims that he wrote the sprawling Book Five, unspooling memory after memory after memory, over just eight weeks. Many of the episodes in this book, if they can be called episodes, are simply conversations he had with friends in Bergen. Coffee is served, new books or records are evaluated, comments on the rainy weather are shared, and that kind of recollection alone allows Knausgaard to dive into the shame, guilt, anxieties, and doubts that plagued him in his twenties. I understand why he wrote the book so quickly. He seems to want to unburden himself of all the unhappiness from that period of his life. Knausgaard was already a huge success in Norway after the first installment of My Struggle; in Book Five, he dares his adoring fans to still adore him. He’s the musician who turns his back to the audience but still plays the most amazing guitar solo. He’s the confident artist all of us want to be, exposing his warts and recognizing their inherent worth.

A recent This American Life episode, “In Defense of Ignorance,” featured a segment on highly superior autobiographical memory (HSAM). Individuals with HSAM can recall virtually any day of their lives in perfect detail. There are less than 100 people in the world with true HSAM, and This American Life was able to interview two such people. Both interviews, perhaps inevitably, filtered down to the individuals with HSAM describing how memories have prevented them from getting over past relationships. Imagine breaking up with the love of your life, the first HSAM interview says, and then being able to revisit every minute of that relationship for the rest of your life. The second HSAM interview talks about how furious she was with her mother for accidentally throwing out an annotated calendar that had served as her diary. The reporter asks the woman why, if she has HSAM, she needed the diary at all. Because the diary, the woman answers, had been her way of controlling the memories. By writing them out, she’d somehow been able to clear her brain, at least a little bit. Sarah Manguso, on the first page of Ongoingness: The End of a Diary, says essentially the same thing: “I wrote about myself so I wouldn’t become paralyzed by rumination – so I could stop thinking about what had happened and be done with it.” The woman with HSAM ended up re-writing her calendar-diary. Knausgaard doesn’t have HSAM but has written 3600 pages of his life, perhaps, for similar reasons.

Most of the Twitter accounts I follow are writers, literary magazines, small presses, and literature websites, and in this insular “literary Twitter” world I sometimes get the misleading impression that everyone in the world is clicking the same links that I am. Knausgaard posts, for example, pop up often in my Twitter feed. Recently, my Twitter feed kept urging me to watch a TEDx Talk by Melissa Febos, entitled “Telling Your Secrets Can Set You Free,” in which she relates her experiences publishing a tell-all memoir. “You have to meet the gaze of your past self and ask her the questions that sometimes we spend our whole lives avoiding asking,” Febos says in the video. “And then you have to listen to her answers.” At another point in the talk, she condenses this message even further, in a sentence that would be a perfect tagline for My Struggle: “The truth always wants to be told.”

After watching the TEDx Talk, I initially thought, “I wonder if everyone who watches that video will try to write a memoir.” But then I noticed that the YouTube video had only been viewed 935 times (perhaps by the 935 members of my small literary Twitter community), and those 935 viewers were all probably already writing memoir (a genre that, for me, extends past non-fiction into fiction and poetry) and were probably (like me) watching the video for confirmation that this process – this sometimes enjoyable but just as often grueling process – was worthwhile. And that may be the draw of My Struggle for writers, too.

“The library is showing that David Foster Wallace movie tomorrow,” my wife said on a recent Saturday. “Didn’t you want to see that when it was in the theaters?” The answer was yes and no. Yes, in that I am always interested in movies about writers, but no, in that I knew Wallace’s family had opposed the making of the movie because a film version of his life would have been a personal nightmare for him. “You should go,” my wife continued. “I can watch the kids.” I’ll never pass up a two-hour break from parental responsibilities, and that’s how I ended up watching The End of the Tour on a Sunday at 3:00 PM with about two dozen septuagenarians and octogenarians (my wife hadn’t told me, or hadn’t been aware, that the screening was part of a monthly film club for senior citizens).

As I suspected, watching the movie was an exercise in conflict. It was fun watching two writers (Wallace and David Lipsky, working for Rolling Stone at the time) bounce around ideas for two hours, it was fun listening to the heavy-on-REM soundtrack meant to capture a 1996 vibe, and it was fun living in a world, albeit a movie world, in which a novelist could really be a rock star. Yet, throughout, I was painfully aware that David Foster Wallace would have hated this movie, would have cringed at the sight of an actor stuffing Pop Tarts into his face while spouting Wallace-ian aphorisms, and would have probably thrown something at the screen when this same actor goofily slow-motion-dances in the movie’s final image.

Wallace wrote his fair share of non-fiction, and many of his friends and colleagues have intimated that these pieces, which range from straight up journalism to personal essays, are the best window onto his spirit. Still, in those articles and essays and books, he controlled what truth would come out. When the movie finished, and the lights were flipped on, I tried to sneak away to avoid the post-film discussion and remove myself from this film that I really shouldn’t have seen. I felt a bit dirty, to be honest. An elderly woman touched my hand, though, and asked, “Do you know if this writer was a real person?” I asked her to repeat her question. “Was there really a writer named David Foster Wallace?” she clarified. “Yes,” I said, and then I left, wishing I’d added, “But he probably wasn’t the person we just watched for two hours.”

Knausgaard, like Wallace in 1996, is now arguably the most famous living writer, exalted by the literary community for a sprawling epic that’s three times the size of Infinite Jest. Unlike Wallace, he still has control of his story, over his version of the truth, and I think that’s why writers are so astounded by what he’s doing. He’s giving the illusion of telling everything about his life, but he’s doing so with a writer’s precision and discretion. In an interview with Sheila Heti, Knausgaard said the My Struggle books were based solely on his memory. “There is no such thing as research,” he insisted. He confessed to Heti that his brother, Yngve, had pointed out factual errors in the books that Knausgaard nonetheless kept in, because he was only interested in telling his version, his truth. This may be why the events of his father’s burial, when discussed relatively quickly in Book Five, bear obvious inconsistencies with the lengthy recollection that consumes most of Book One.  In other words, Knausgaard dances in Book Five, but he gets to be the one to tell us what kind of dancing he did, with whom he danced, and why he danced at all.

Andrew Bomback is a physician and writer in New York