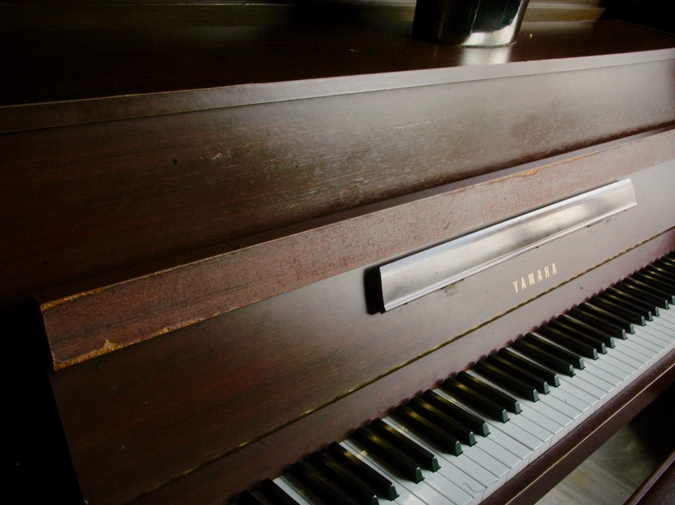 How many white girls of twelve and thirteen became the dreamed-about woman back home when I listened to Every Little Kiss by Bruce Hornsby and the Range? Love itself was good, but I needed the love that was separated by the necessity of work on the docks. I wanted to long. All I was doing was longing anyway. I figured it ought to have some real barriers to it.

In the song she longed for me too. Boy, I thought, I was going to do some beautiful longing when the longing ran in both directions like that. I couldn't wait. I wanted my longing to be a clean straight line and I wanted the barriers to be tall and straight and difficult to climb, but certain.

It was awful thinking the barrier was something about me. No girl I could actually like would think the barrier was me being Iranian. I couldn't believe it. But I knew that I could worry myself out of any potential love affair by thinking of how I didn't know the language and customs of romance the way they did. It wasn't like that when I listened to the song though. I knew all that stuff too well then. I told Allie Etterman and Jenny Wheeler and Nora Downs that the world was a difficult place, that I was going to be away for a while, working with the other men down on the water, but I was going to raise my head in the evening towards the horizon and I was going to remember the sorrow and beauty of our separation. It couldn't be helped. I wasn't going to be gone for good though. It was important that they remember that.

For my thirteenth birthday, all I asked for was a Bruce Hornsby and the Range songbook for piano. If I could play the song myself, that would prove it. It would prove that the separation was a beautiful one and not something lousy. I went to work. Here it was now, coming from my own hands on the piano keys. You think there could be any question when I played it and the song rang through our house that it was a sweet and tragic separation, directed by forces larger than me and any one of those three girls? You think there could be any music to it if the separation had to do with me being Iranian? There were no songs like that. I was glad as hell that there weren't. I wouldn't have wanted to play them. I thought it was my job to live up to music; I didn't think it was music's job to live up to me.

I'd come home from a day at school when I'd seen one or two or all three of those girls walking and laughing with a white boy, like romance was an easy proposition, something that ran back through their whiteness and Americanness with a familiar knowledge, that touched on television programs in which American parents thought it was cute and nice when their children began to enter the dating world. I sat at the piano and played the song.

When I did, I thought, Go ahead, treat it like something cute and nice. As for me, I'm concerned with the hardship of romance, with an unforgiving world that doesn't offer any ease to a man and a woman in love. I figured I'd skip boyhood and go straight to manhood. I didn't know how to be an American boy, but being a man in America had a song.

It's funny, the things you decide to take and to leave out when you don't have any family history of being American to draw from. I did it all the time. There was a funny freedom to it. When I played Every Little Kiss, I practically felt sorry for the white boys who were stuck being thirteen. They couldn't pick and choose their America like me. That would last until I saw them walking with one of those girls at school again the next day.

Things were coming to a head, and I couldn't keep feeling like I was ahead and behind everybody, by turns. And so when the end-of-the-year talent show came around, I knew I had to perform Every Little Kiss in it. It wasn't so much out of a hope for winning as it was out of a hope for finally figuring out where I stood with America.

The day of the show, I felt a breeze as I walked to the auditorium and it seemed to me to have the scent of saltwater in it. I thought the sound of men unloading cargo was not too distant. Everyone would see today that I was interested in romance with obstacles. It wasn't surprising that I would be the one to tell them. If an American boyhood wasn't accessible to you, you had to start early on an American manhood. It all made perfect sense to me.

I sat backstage and Mr. Rivers, who organized the show, saw me holding the songbook.

"Have your parents come in, Babak?"

I looked past the curtain and saw the seats filled with the families of the kids who would be performing. In my concern to show my standing in America, I had completely forgotten to tell anyone at home about the show.

Had I really forgotten to tell them? I had thought it was obvious. Why else would I be practicing Every Little Kiss if not in preparation for the time when all three of the girls who were really the woman in the song would be assembled together?

I felt good and separated by the time it was my turn. I walked onstage and I saw some empty seats where my mother and father and sisters could have been sitting. It did touch something beautiful to see them, even though it was still goofy.

Something nice must have happened when I saw those empty seats, because I played the song as well as I ever had. And then something else happened. After I played it, I looked out at the crowd as they applauded and I didn't care how they saw me. Of course I have to play these songs and reach for the most romantic parts of America, I thought. Isn't it obvious? I thought I heard something in their applause that sounded like surprise. I can't help you if you're going to be surprised about it, I thought. That's a step too far for me.

Jenny Wheeler was backstage and she saw me.

"That was great, Babak."

"What is the song called?"

Did the dream of a girl who became the woman I missed in the song still count if she didn't know the song? That wasn't as pretty of an obstacle.

Jenny went onstage and sang The Greatest Love of All. It was beautiful, even if I didn't find any place for myself in it.

She got first place and I got second. I got a ribbon, and we took a picture together.

Afterwards I walked home. It was too embarrassing to tell my family I'd forgotten to tell them about the show, so I didn't say anything about it.

I don't know how long I went thinking that the prettiness of the obstacle was the measure of love. It may have been months or years or more. There was my friend Ethan Dambic's cousin Hannah from Israel and I thought somebody in my family would help me out and articulate the presence of a forbidden quality to an Iranian boy and an Israeli girl being together, because that would be a very worldly and historical obstacle, but nobody did. There were also a few Iranian girls, and the ease of having no discernible obstacles with them left me terrified.

Sometime later my father saw the ribbon I'd won under some books on my desk. He asked what it was.

I wanted to tell him that the ribbon was all you get for thinking you can skip American boyhood and go straight to manhood, that it was the symbol of a very special foolishness that I was most decidedly still in and would be for the foreseeable future, unless there was some very big change in the state of affairs and somebody could clarify whether love was supposed to be the easiest or the hardest thing in the world.

But I didn't say all that. I told him I'd won second place in the school talent show and he said, That's nice.

Siamak Vossoughi is a writer living in Seattle. His stories have been published in Hobart, Kenyon Review, Missouri Review, Chattahoochee Review, Bennington Review, and Gulf Coast.