the revolution room: station one 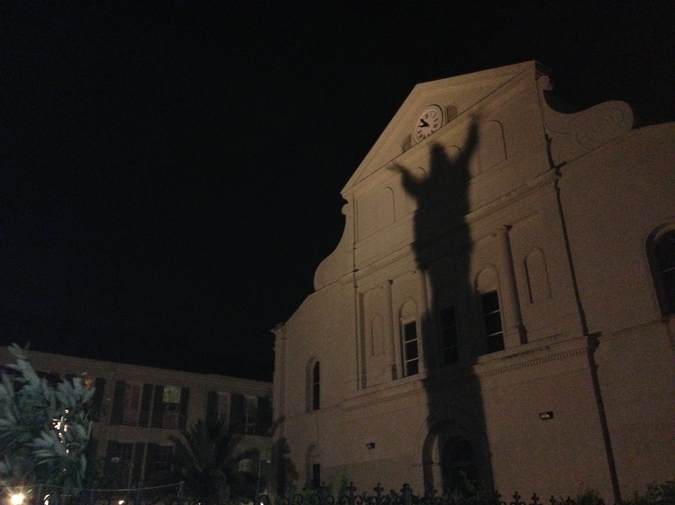 It is not easy to remove a heart with a spoon from the chest of a man, nor is it clean. The spoon was purchased 48 hours earlier from the Bed, Bath & Beyond on 9th Street. The Nicole Miller Moments 5 pc Flatware Set was $24.99. The salad fork, dinner knife, dinner fork, and soup spoon were disposed of. Only the teaspoon remained.

The man is still crying. The small spoon slips in his large hand slicing instead of stabbing and resulting in a bout of panicked whimpering from the first shedding of the man’s blood. Someone says you’re not listening. A second, larger strip of duct tape is applied over the one already applied over the man’s mouth, tightly, with a hand holding each end as the man’s eyes open wider and louder screams like from behind closed doors as the duct tape adheres to the man’s hair. Someone else firmly holds closed the man’s nose. The spoon is placed in a smaller hand. Someone else says appease his impatience. This time the thud is from the impact of a small fist, not a teaspoon, a crack preceded the thud, firm and wet. a satisfied sigh from the man followed, his nose also being released at the point of impact. Other sighs from other men. All listening. All appreciating. All being appreciated. A paper bag is loudly opened.

heidi does not like the shirt you bought for her. Something like a girl would wear, she says. You explain that that was precisely what you thought you had purchased, that you had thought that you had successfully purchased a pretty shirt that a girl would wear, that you were under the impression that the present, persistent and extenuating circumstance of heidi requiring a shirt had been resolved, that she was in fact holding said shirt, which is precisely like something a girl would wear. heidi says but it’s not pink. You receive a text message. It says have you purchased the Nicole Miller Moments 5 pc Flatware Set yet? you panic. You tell heidi that you have to go because your mom’s sick. heidi says her mom hates her. You ask heidi why her mom hates her. heidi says what the fuck do you care, man? You say you don’t, that you were just making conversation. heidi says oh. The second text message is the same as the first except instead of a question mark, there’s an exclamation point. You panic better. You tell heidi your mom has gotten worse. heidi says moms always get worse before they get better. You say or pinker. heidi laughs as if it’s the first time her body had expelled such a thing.

You have successfully purchased a Nicole Miller Moments Flatware Set. You wonder what it must be like to be Nicole Miller, designing flatware sets transcendentally in those moments when she’s doing the dishes or mowing the lawn or removing hearts from the chests of men. There is a chalky white substance in your right eye. It began to accumulate that morning. When you first noticed it, when you first realized it was there, blurred vision revealed the blinds pulled and the window open and the man standing next to it was not one you were familiar with, though the room is known to attract men you are not familiar with. He was standing at the window and his hand was out and his mouth was open and the way both were moving suggested he were having a conversation with the window, which would explain why it was open. You rub your eyes. You inspect white chalky substance now on your finger. You look back unblurred to the now closed window. Conversations between unfamiliar men and open windows never last very long. An American flag atop a building in the distance waves to everyone.

You are a visitor now. You are a traveler. You don’t belong here. You don’t live here. But it’s where you’d rather be. Beside the window. Were you to open it, were you to speak to it, it would agree with you. Everything agrees with you. Outside where an American flag is waving everyone is waving back, with tears in their eyes, with hope in their hearts. The intersection besides the corner and the people walking everywhere, all understand the significance of being witnessed by you at this very moment, from this very station. Men mumbling, one crying, and a more appropriate hand to hold a spoon, from this very station, and were you to witness heidi or david or any of them pass below, they would stop, and turn, and look up to see you standing there, with your hand out and your mouth open and the way they both were moving would suggest that you were speaking and the words ‘a heart to dispose of’ would be heard by them all. A paper bag is loudly opened.

How you acquired a paper bag, how it is that there is a paper bag in this room, was from Emmy’s Chinese Restaurant. Curry Vegetarian Ham and Tofu Chow Fun. Nobody else was hungry. You asked everybody three times. Literally walked around the entire room, through every department, division and subdivision, literally tallying in your little black book with a little miniature-golf pencil the fact that you were asking everybody, everybody literally had three tallies next to their name, which was in no way a passive aggressive reminder that should anyone else ever order from Emmy’s Chinese Restaurant that it is just good room policy to ask everyone else if they wanted something to eat. You placed the order on Grubhub at 2:32pm. Curry Vegetarian Ham and Tofu Chow Fun (no egg please) and General Tso’s Meatless Chicken. The total came to $23.43 including a $5 tip. You are informed that your food will be delivered between 3:30 and 3:40pm. Having anticipated being approximately an hour away from being hungry, you return to your station.

When the paper bag arrives, you are staring at david’s face on your monitor. It is redder than it was. His eyes are blacker. You have zoomed in on his encampment beneath the temporary shelter of scaffolding and plywood. It has been a week since you’ve seen him. He looks tired, like it’s taken him a week to walk here. His right knee juts awkwardly against his pants, his chest awkwardly against his shirt. Had he wings he’d be a dragon. Your cell phone says your food’s here. You rush down seven flights of stairs to get your food as now an hour of staring at david has had the result you expected. The daylight is nothing like you imagined.

Sometimes you think about Emmy’s Curry Vegetarian Ham and Tofu Chow Fun (with no egg) even when you’re not hungry. You are not hungry when they open the man’s ribcage.

It makes a lot more sense than you thought it would. The inside of the man’s chest. Someone says how efficient. The old man’s mouth is closed. He no longer looks like a geriatric voyeuristic masturbating zombie. It is still beating and the silence seems to strengthen with each beat, as if there were degrees of silence, as if a wealth of silence lies beyond the first moment of quiet. A little bit quieter as each beat takes a little bit longer until you are as sure it will stop as you are that it will continue, which makes the moment until it does infinite, infinitely waiting for the contraction, as if it was gathering itself closer in the cold, and the silence is the cold, and it will never stop, and you don’t know what to do to make it stop. Someone says make it stop.

You are standing at the window when it stops. You know this because you hear someone say it stopped. The old man says I thought that wait would be the death of me. Nobody laughs except for you.

You are standing at the window when you see david pushing his shopping cart down the street below you. Before you can wave, you are handed a bag. Within the bag is the man’s heart. It has been bled, bleached and dried. It could have been anyone’s heart. It has become generic. You are told to dispose of it.

Allan Shapiro is a writer and a social worker living in San Francisco. His work has appeared in such lit mags as Canteen, Pank, GUD, The Rag, to name a few. And he is currently the manager of St. Anthony's Free Clothing Program.