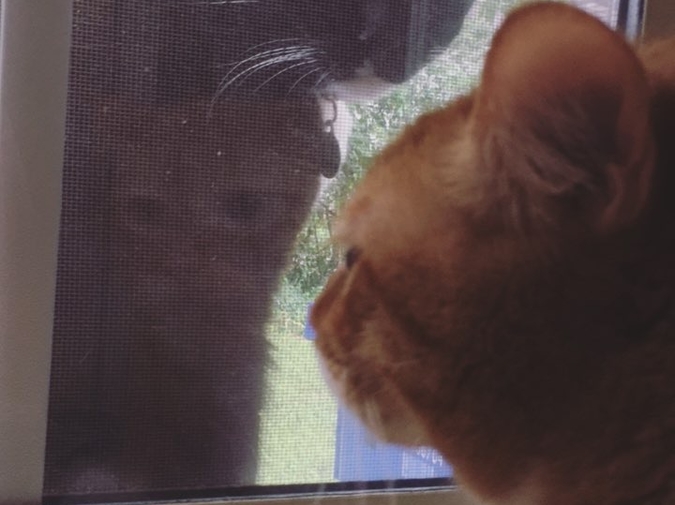 We hear them in the kitchen, leaping around with meaty thuds, and in the morning Cheryl has barricaded the kitchen door. She tells me the landlord sent someone to assess the situation.

“I’m not going in there, and neither are you.”

I don’t say anything. We both know the answer.

In the afternoon a man in coveralls appears at our door. He introduces himself as Romero. He’s a quiet, Dad-sized man, with callused hands. He says, “Rats, huh?”

We nod, waiting for Romero to lift our curse.

He comes forward into the apartment and stops at the closed kitchen door. He looks down at the cardboard box I left on the floor.

“What’s going on here?” he says, tossing the box aside.

Cheryl makes a face at me. A hammer? Really?

It’s no joke. Romero means it.

Romero opens the door to the kitchen and I brace for the plague.

It’s quiet. Romero goes under the sink. He pulls out the stove, the dishwasher, and checks around the fridge. He is affirming things under his breath. Mhmm. Oh sure. Yup.

He identifies a few possible entrances. Little portals underneath the sink and behind the stove. He sets a few traps.

“Give me a call if you hear anything,” he says.

Rodents have entered my home in the past. Cheryl and I have both seen things. It’s just that this time, here in New Orleans, it feels more symbolic. That our many months of stress and anxiety in moving down from Minneapolis has manifested into something real. The universe is teasing me. You made it this far, the universe is saying, let’s see how you handle these.

Nearly an hour after Romero leaves us, a trap goes off. Then another. A third. Cheryl and I are mortified. The kitchen door is closed once again, cut off from the air conditioning so when I go to check the traps, the atmosphere is stifling. Under the sink I see fur, tiny rivulets of dark blood blooming out from under the rat trap. Romero has placed a sticky trap back there, too, and I’m thankful there’s nothing yet on it. Soon the kitchen begins to smell.

We call Romero, with his heart of gold, and he tells us he’ll be back before this evening to get rid of the bodies.

In the meantime a brand new horror has occurred. There is a tiny scream under the sink. A wild and frantic chirping. It’s a baby. It’s on the sticky trap. I know this without looking.

“Stop coming in here,” I plead to the walls of our apartment. “Nothing good will come of it.”

Cheryl’s pacing in the living room. She says, “It’s time for a drink.”

Romero returns in the same coveralls as before, but this time he comes with tools. Some kind of wire mesh, a staple gun, plastic bags, gloves, a belt of fasteners and bolts.

“There’s something on the sticky trap.”

“That’s okay, man,” he tells me. And there’s kindness there, as if he hadn’t noticed my humiliation. “Let’s take a look.”

Sure enough, there’s a tiny pink rat stuck to the paper. It looks like plastic. It’s not moving much, but it’s alive.

I leave the room and don’t see what happened next, but later Cheryl will tell me that Romero folded the paper in half and smashed it.

I want to tell him I’m sorry he had to do this for us. That he’s become a killer for a Midwestern twenty-something who couldn’t do it on his own.

But now Romero is unfazed. He disposes of the corpses and patches holes. He fills them with steel wool and staples the wire mesh over the portals. He is confident this will stop them from getting in.

If Romero is happy, we are happy.

And I in my smallness, my inability to even watch, envy his fortitude.

The rats haven’t returned. Though some nights, and this is not often, lying in bed we hear a sound. Not a chirp or a shriek, but something much more subtle. The clicking and grinding of little teeth on wood. A ghostly scamper into the attic.

I clench my jaw and pretend not to notice.

I can tell Cheryl does the same.

Don’t come back, I plead silently to the walls, I’ve made it this far.

Alex Tronson is a writer from Minnesota. He currently lives in Louisiana where he is an MFA candidate at The University of New Orleans. His stories and essays can be found in Barstow & Grand, Red Cedar Review, and The Summerset Review.