The Poet Debates with his Friend's Mistress, Death 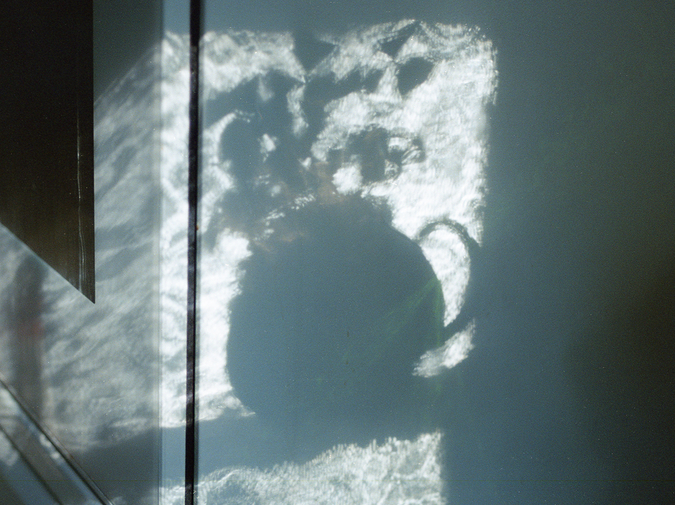 Having howled too long
For the abducted soul’s return
To the cold flesh
Of one cherished,
I belabored Death
With an invitation, which she
With grace accepted,
Appearing at my door
One early afternoon.
We ate small cakes with tea.
She was without affectation
And beautiful. It went like this:

Sharp lack of ecstasy had been a poison
That thickened blood to a cold paste
And paled my kindled skin to wasted ash,
That at first I did not hear her knock.

She knocked again. I rose
And staggered to the door.

Sunlight tore through the room’s air
Like ignited birds that scraped
The floor and walls in raucous throngs
With melting, illuminated feathers;
And this as I opened the door
And found her there,
A vision of subdued cheer—
So that I was dazzled, and my eyes failed.

I took her for a stranger—and her eyes
Sizzled as she crossly spoke:

“Does my stupid lamb lack sense
Enough to know his Shepherdess?
A glob of shadow is the slop
His skull holds, if this be so,
And his eyes still swirl in their cups—
Or have I like a cat
Lapped those milky orbs down
To the rotted bone?”

She smiled then, and I knew her.
She entered, and I closed the door.

I took her coat and found the lining
Warm from her body; and as I did,
She touched her finger to my eye,
Which I did not like—
Though it was as soft as a tear—
And said she would not eat them yet;
Though then saw and took
Into her hands two sketches made
In charcoal of my friend, and asked,
Did I feed these same eyes, that once
Seemed half-melted fragments
Of the day’s sky shattered by starry pistols,
Such trash in endless series—
That they now must crawl like worms
Forward through the light they eat?

And then I was displeased, because
She was a guest, and I had not asked
Her there to mock me.
I said as much—again
She smiled, and told me
That the likenesses were keen,
Though I was an idiot,
And a poet’s tears are his disgrace;
She said:

“What honest shadow won’t dissolve
And break apart in brightness?
And here you’ve set, like Pompeii’s stains,
A ruthless dullness to persist—
Contrary to sense, contrary to health and elegance.
The grand, loping blob you weep for now
Was a mass of slowly rotting thread—
Nerve, meat, and skin mere tangled string
In which the soul played kitten—nothing more.”

I mumbled, quite dissatisfied,
And offered her her coat;
But she brushed it to the floor
And demanded cake; and I was pressed
By my shoulders into the kitchen.
I’d bought a cake, a luscious
Sachertorte, which she ate and criticized,
Dropping crumbs as she gestured—
And this at times maniacally.

I said that she was cruel;
And she leapt up on her chair, arms cocked,
And declaimed her fanatic protest to the ceiling:

“Who holds that mercy is a type of crime?
Or are my gestures harsh? For in truth,
I ease disgraced excellence; while the twisted child
Born stifling in the racket of its form,
Cast out by its parents, I nourish with milk of my flesh.
To them, as to the infant torn in war—
Whose slaughtered mother’s blood is the melted arms
That it hold and soothe—to such disordered lambs,
I say my knife but combs their throats
Like shining hair to make them smooth again.
And then, am I not tender?”

She nipped her cake. I wished that I
Could think of some response,
But the reeling frenzy of her speech
Had left me so agape
That she looked at me and said that saints,
When butchered, hold their faces so.

She laughed and stepped down. She cut
Another slice of cake
While I turned to start the kettle;
And while it warmed, I went and got
My notes, wherein I’d set
A lengthy accusation, and returned
To find her seated and attentive—
The wedge of cake
She held upright in her hand
And bit with birdlike dartings
Of her smile. I almost laughed—
Though grew serious by remembering
My complaints, and read to her:

“You end all good things; though many
Of us you send, we hear, to grave torture,
And for them you manifest no end.”

At which point she clutched her knees
And rolled about the floor,
That I regretted to have tasked
Her harshly; till I heard
Her laugh, though she tumbled still,
And seemed a cork tossed round
On giggling foam. She stretched
Gasping at my feet and said:

“So the poet wheezes sighs and drools
His honey on the page,
Like a dull and weepy bumblebee—
Who lays his friends in mausoleums
Of carved salt, decayed by rain,
And lies down even among
Their carcasses to moan.
But if you’ll sob so wretchedly,
And simple as an infant, I’ll soothe
Your petulance with fresh candy.”

She pulled from her purse a skull,
And, standing up, she set it
On the table; and I saw
From the chipped front tooth
It was my friend’s, and I yelled in anger;
Though she smiled and stroked it
Like a pet, and I said
It was an unbecoming pleasure
To so enjoy our losses
And our suffering. She said:

“You moan of pain as if it were not good—
The burning hoop I whip my tigers through
To give them discipline; and though there be
From time to time some tardy one who lingers,
Recognize you not that there are some
Who still, like Saturn for their heaviness,
Must be in Heaven ever held in place
By a disc of flame?”

I did not speak, but was confused;
She marked this and continued:

“Hell is a bin for the disharmonious doll,
Who sings too foul or shrill its melody
When the string is pulled; Heaven is similar,
Though collects more pleasant mannequins.
We gods care not for your love or hate, your tears
Fall not from our eyes; we like the sort of doll
Who looks like us, and fits its simple habits
To our own proportions; and such a thing
Is fine enough. We’ll keep it near.”

She stroked the skull and gobbled cake;
I weighed disjointed arguments.
The kettle boiled; I made the tea,
And when I turned around,
I saw she’d set the cups and placed
A third one for the skull.
I poured just two, though saw
Her face and bearing grow severe;
I poured the third; then cut more cake
And sat me sullen down.
She softened and spooned sugar,
In hers and then in ours,
And the swirling liquor seemed to make
Of each thin shell of porcelain
An ear; and this she saw me think, I guess,
And said that they were listening.
She whispered into hers
Before she sipped, which I found grotesque;
And this again she saw, and said
I was just such a shell
Made hot with neatly spinning liquids;
Though as fragile to destruction
As a curling wave. I said:

“Though fragile, still I govern force
Throughout my instant;
My voice lends its savor to the air,
My joy and sorrow add their texture and sense
To the dust of their composition.
I sail for my few days above the depths
On a splintering, wooden bubble;
And though I fall in wreckage to the waves,
And with my colleagues melt
Like dispersed sugars, sweetening the deep,
Yet the carved effect of every life
Persists in time’s unfractured mass;
And this dignity is our inviolable home,
About whose doors you howl and scratch,
Though may never enter.
As mere cessation, you lack all quality;
You do not exist, and drag things into you.”

She frowned at me and clucked her tongue.
She said:

“What savor, chased to wild
Extremity, does not,
Like a hunted animal, turn and bite?
My touch, and nothing else,
Translates all thrashing flesh
To nourishment, or spills honey
From the cracked heart
Of a slaughtered enemy.
The church digests its rooms of clotted
Prayer, breath locked and rotted
In the vaulted stone, which I make snap
And tumble at my will--
And stifled voices find their gods.
And if thereby some pleading bones
Be smashed to jagged dust,
No cruel, negating hand it was
That fell to pluck, from its cage of knotted vein,
The dispassionate animal of smoke—
But prayers answered more abruptly
Than one knew one wished.
To Heaven or to Hell, all’s to be preferred
That drags one through a hole
In the floor or ceiling of one’s cell;
To breathe free, not stifling
In the moon’s discarded skins
That fall to earth, ensnaring
As they do some darting souls—
Who fall like sleepy snow
From dreamy, unremembered wombs
And populate the world.”

She sipped her tea. She wiped her hands
Till they were clean of every speck;
And I was lost in rapture to observe
The limber dip and curl of every finger.

And now, there can be no doubt at all
That here I lost all sense—
As I took her hand and, ravished, kissed
The shadow of her palm;
Though she laughed, and like a playful ape,
Kissed mine identically.  She said:

“Joy is not joy, but a frenzied child,
Who tears with both fists flesh
From its petty frame, and weeping, feasts;
Nor knows love its savaged prey—
The heart unfolds its wolfish fangs
To attack its image in another’s blood.
Am I pretty in your eye?
Pleasure, like a sick dog gunned down,
Teeth melting in a pool of foam,
Gives way to softer ecstasy;
And I find you beautiful.”

We kissed. Much later, in her arms
I asked if she was happy,
And she stretched and smiled;
And moonlight, like evaporated doves,
Fawned and licked her skin.

The night progressed, and at some point
I drifted into sleep.
I woke and she was gone—though still,
In the kitchen, my friend’s skull
Sat quiet by its cup.

O Wonderful friend!—Does he climb even now
To Heaven on his strangled dreams?
Or are his faults scattered over yet-unborn faces
Like infectious, disfiguring shadows?
Wherever—and in whatever form—

Jason Reed-Mundell has an M.A. from Cleveland State University, lives anywhere he bloody can, fails at everything and always comes off the floor swinging.  His gratitude to Nico and Elizabeth is beyond words.