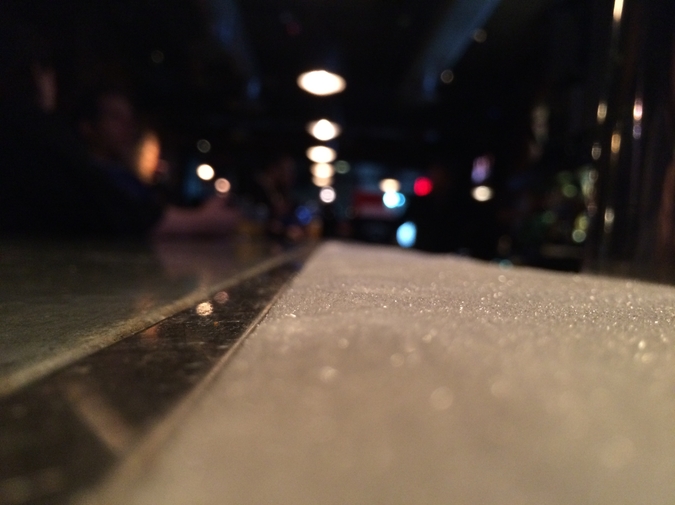 The Actress clears her throat. She has rushed from the other side of town where she has a paying gig playing a flirtatious but guarded receptionist (for this she had gotten steadily improving reviews: it was a minor part but she played it with aplomb) to get to the set of a play that was her true passion, a frequently intense Ibsen-like chamber drama. This she did not for the money - there was none - but for the prestige, of which there had been a not insubstantial amount at first. She closes her eyes and gets into character, finding the jovial trill of the receptionist role transform into something more weary. She glances into a pocket mirror. She is WIFE now. She doesn’t need to go through her lines, she’s been doing this for years.

This used to be a play for four actors but Andrew (who had previously played SON) and Rebekah (who still showed up a few times per season to reprise her role as DAUGHTER) were both attempting star vehicles of their own at the moment: Andrew was in a widely ignored gritty social realism thing that was all drugs, misery and infants in need of inoculation. It was said, by the few who watched, that he was very convincing in the role of the addicted father. As for Rebekah, she was currently playing the clichéd but popular role of the Queen Bee in a frothy college spinoff that took place at Syracuse. When Rebekah guest-starred in one of her four contractual appearances a year she would hate the forced crossover that the producers insisted on, performances would be stilted and clash as the actors uncomfortably tried to figure out who they were supposed to be in real time.

The Actor is sitting at his desk, wearing his customary cardigan on top of his pyjamas, hulked over the computer, too enrapt by the word processor to notice that she has entered the set, his face illuminated by the cold creepy glow of his laptop, fragments of sentences reflected in his glasses. He has missed his mark, there is now an uncomfortable silence. Goddammit, she thinks as she scrambles to salvage the scene.

She walks up to him and puts a hand on his back to connote affection rather than displeased nagging. He jumps at her touch, startled, and looks at her as though he had no idea that she is supposed to be on set for this scene.

The Actor is trying to regain his composure but she can tell he is barely mustering the minimal effort required to slip into the character of HUSBAND. With the industry being the way it was, he had recently found himself in the position of having no other gigs, and the uncertainty of his life outside of this had begun to affect his performance. He had gained weight and was frequently drinking on set (he claimed this added an element of authenticity to his character, a working-class man going through Hard Times, an assessment with which the Director, it seemed, agreed). The Actress on the other hand had, beside the bit-part as the receptionist in the office drama, also a supporting role in an ensemble sitcom centred around Trisha, a loud blonde whose shenanigans the supporting cast would marvel at and comment upon. The show had initially been called Girlfriends, but after a few seasons the powers that be changed it to Trisha! - complete with exclamation point. Nobody had bothered to tell the Actress, one day she just showed up on set and found that it had happened. Still, she was lucky to have so many other projects: though this was her passion (she kept repeating this to herself as it had definitely been true once and there was no reason to believe it wouldn’t be true again), if this had to fold, she would get by on her other performances. The Actor only had this, and it showed.

The Actress gives him a kiss as per the stage directions. Initially they had been awkward, these kisses, but they were now both used to the displays of affection, the intimacy having become automated, the act of machines. She lets her hand slip off his back and goes to pour herself a glass of wine, kicking off her heels, letting them remain in the living room to indicate to the spectators that she, a hard-working professional, is letting off some steam.

The set had been decorated by some bint who sat with the performers during rehearsals and asked them ‘who are you as a couple?’ and then put some trinkets around that were supposed to somehow mirror this. The Actress thought this was all nonsense. After so many years playing this part she knew one thing: whoever they were as a couple ought to have a more comfortable couch than the one they had been saddled with.

She pretends to be watching TV and takes a sip of wine. It is cheap stuff but it is supposed to be cheap stuff now so her tiny grimace as the sharp chardonnay goes down is entirely in character.

So, how was your day?

Me? Oh you know, I saved a kitten, proved Fermat’s last theorem and then ran a marathon. (Makes an exaggerated gesture up and down his own body, to indicate that he was still in his pyjamas so how interesting could his day possibly have been.)

It wasn’t a bad line, it could have been funny, but the Actor tanks it. He’d never had great comedic timing but this was more than just bad timing: the line was supposed to be read with a certain klutzy playfulness. Instead, for some reason, he said it with anger, he sounded bitter. The line doesn’t get a laugh.

She takes another sip of her wine. He is now supposed to say ‘and you?’ He doesn’t. She sighs.

I’m getting a beer.

She had sometimes felt sorry for the Actor during this bit in the past, it was a difficult feat of acting to seem surprised and interested after hearing the same story for years, but that was no reason to undermine her like this, to interrupt her monologue.

We’re out of beer.

He drinks from the last bottle and sits next to her. She reaches over to put her hand on his, a display of affection, but he pulls his hand away and proceeds to rub his forehead.

Improvising again. The prompt (the Actor’s father, who has been doing this for all of the Actor’s roles, regardless of whether or not he has been asked to do so) hisses the actual line back to him: an apology to her, a statement that he is just tired and confirmation that he loves her. The Actor either does not hear his father or proceeds to ignore him, because the next thing he says is

I don’t think this is working anymore.

The audience boos. It is the first major reaction of the night, and it startles the Actor who looks around at the audience as though he hadn’t realised they were there. He sees his friends, sitting in pairs, shaking their heads at what he’s just said. He is surprised to see them there, he would have thought they would have gigs of their own or that they wouldn’t care to see him in this. He can sense their disappointment with him and his career even though the spotlight on him has reduced them to mere shadows. He wipes his palms on his pyjama bottoms. He tries to get back on script.

I’m sorry honey, I’ve been stressed out, is all. You know I love you.

Agri Ismaïl is a Sweden and Iraq-based author. His work has previously appeared in The White Review, 3:AM Magazine, Vol. 1 Brooklyn and Al Jazeera among other places. He can be found on Twitter.