The Peaches Are Cheap 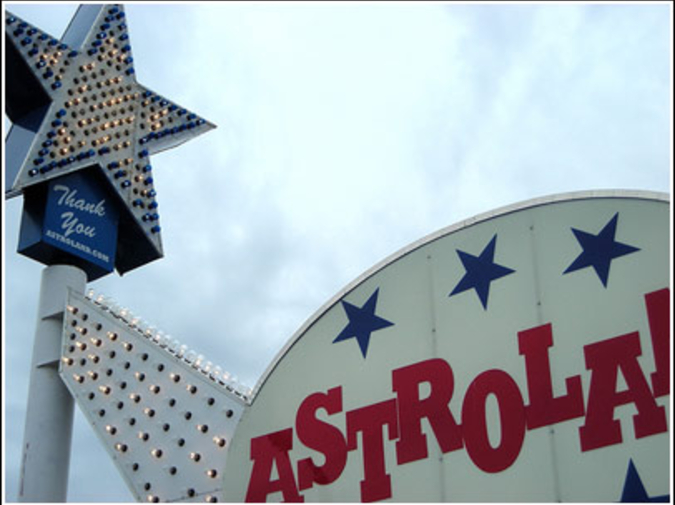 It's August, and it smells like grass and cranberry fruit snacks. I pick my brother up from the post office where he works. When he gets in, he says, "Let me take off these shoes."

We drive and see things: old fences, a barbecue in a motel courtyard.

"Are you guys semi or official or what?" I ask.

We see hobos in swimming trunks, chlorine hands, this boy with a mohawk playing the violin on a porch.

"It's something," my brother says. "It's not letting down."

"So why did she leave Eugene again?"

"I didn't tell you in the first place. This guy, this stalker guy, right? He breaks in and hangs out on her balcony? She finds him there, saying something. I forget what."

We see shirtless skateboarders, shoes tied to power lines, evening sunlight that falls like an arm across a pillow.

"I think I'll hit her with a pipe wrench."

We laugh. We see dustmites and Kool-Aid stains, sweat, our own thoughts of shower curtains and flesh.

There's a scab under my eye, so I scratch it.

Earlier this summer, my brother delivered a JCPenny catalog to the wrong apartment number. He met this woman there. She was spraying Raid around her windowsill. Now they fuck.

"I want to turn into a firecracker," I say.

He spits. "I want to turn into a basketball star."

It's one of our tired little games.

He kind of smiles.

We go to the supermarket and buy canned peaches. The teller woman squints at my brother. He winks and steals a penny from the charity saucer. Out in the parking lot, we eat the peaches with our car doors open.

Sometimes, under this drawl of light, a dying will find your jaw. There are old fences and old dogs all over this town. By September, my brother will be seeing the supermarket teller and scoring free beer.

I drop him off at his place. Before he leaves, he leans into my window for a long time, then he thanks me for the ride. I think to ask him about playing pool, about buying a pizza.

"No shit?" he says. He laughs and leaves, hands in his back pockets.

It's August, and it smells like wrenches, grass, distant water.

I drive home with my eyes open, then I drive with them closed, hoping to hit something, anything, like a kid on a bicycle, or a refrigerator box, or a wall of lightning bugs ten billion strong.