The Parts of An Arrow* 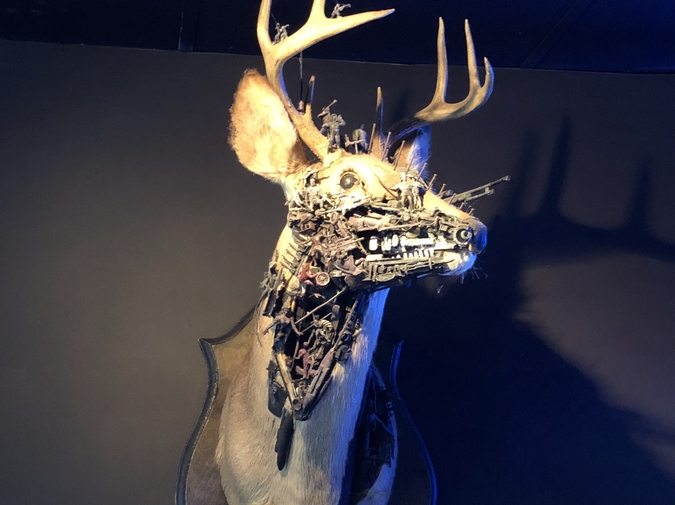 My father recently purchased a crossbow, which looks like a gun with an arrow on top. It is camouflage and you have to use a special device to pull it back because the weight is too much for human hands. His first shot with it was a kill shot, but a gut-shot nonetheless; the deer stumbled, he tells me, for several yards before collapsing and falling on its insides, which had spilled out of the entry wound. This was likely because the arrow deviated from its intended course and travelled unexpectedly to the right. As a result, my father had to cover his nose upon approaching it and bury the guts in a trash bag in the woods following the skinning; it was uncommonly warm for fall. That’s the only thing he doesn’t like about bow hunting, he said, the unpredictability of arrows.

An arrow has four parts.

A slotted plastic tip located on the rear, the nock, that snaps onto the string and holds the arrow in position. It keeps the arrow steady on the string upon pulling it back.  On many bows,  there is a point specifically designed for nocking, usually marked by what looks like a bead. The nocking point is designed to help you make an even, centered shot, and should be adjusted according to where your fingers fall naturally. In other words, this is the point at which everything rests.

For days, my cousin looked for the shot. He climbed the tree in full camo, bow and quiver on his back, into his hunting stand, to wait for it. The deer knew what was coming; each day, she'd look up at him, into his eyes, and, before he could even get to nocking, would run away, tail in the air, beckoning.

When I hear this story, I imagine my cousin muttering fucking bitch or you just fucking wait under his breath. He wasn’t always violent, but sometimes I think of him, when he threaded a hook with a worm, for instance, saying, there, you son of a bitch, as he pressed its head harder and harder, until the membrane on the skin would give. He’d push it—the head or the tail, it’s hard to know which—down onto the hook and loop it back again into a knot, in hopes that the fish would bite down hard enough, get caught. After, he’d wipe the membrane onto his jeans—often, the same jeans he’d asked me to put my hands under—spit, and cast the line into water.

The fletching, otherwise known as feathers or plastic vanes, creates a wind drag in a way that causes the arrow to spin like a bullet. The spin provides stability and accuracy in flight. The fletching generally is composed of three fletches, two of the same color, the hens, usually orange, white, or red. The remaining feather, the cock or index, stands out in color from the rest.

I imagine the fletching on my cousin’s arrows were traditional colors, like reds or greens. His fletching was likely made of feathers—plastics were more expensive and although sometimes more durable and effective, his father might have beat him for losing one.

As a child, I spent several hunting seasons on my uncle’s property. My father, grandfather, and uncle made a tradition of hunting together and I went along. I shot guns, but could not pull back bows. I envied my cousin’s bow so much that I tried to make one myself. He humored me and helped me make arrows from sticks, which fell straight to the ground upon release. I stuck to guns and shot cans and empty milk cartons, but could not shoot animals. I held dead squirrels and dead rabbits and helped drag dead deer from the woods, but could not skin, gut, or kill them. When the men pissed in the woods, I could try to piss with them, but once pissed all over myself because I could not piss like them.

Instead of hunting alone, then, I accompanied the men, and, though I didn’t shoot anything, still said I was hunting. I held the guns and loaded the chambers. I whispered, there’s a deer, when I could see one and sometimes cried later about my betrayal, but still said it, nonetheless. I warmed my hands in my pockets with HEATfactory packets. I wore bright orange hats and bright orange clothes. I held the arrows.

The doe would return to my cousin’s hunting stand over the course of a week. Each time, she’d look at my cousin, to the feed, and back at him again. He could never raise the bow in time for the shot. As soon as he’d get the arrow nocked or pulled back, when he’d look down the shaft, she’d be gone, her feet crunching the leaves underneath.

An arrow’s primary component is the shaft, the long spine of the arrow which holds the fletching and connects to the arrowhead. Modern arrow shafts are made of wood, fiberglass, aluminum, or carbon. The arrow, regardless of shaft material, must have the correct stiffness to match the bow. As an arrow is released, the shaft bends before straightening in flight. Incorrect stiffness will cause the arrow to fly erratically and inaccurately.

The arrow with which he shot her was likely carbon or aluminum. That day, she looked at him and hesitated before she reached the feed, lowered her head to it, exposed her neck. This time, when she looked back at him, my cousin already had the bow pulled back.

When we were five or six, well before that shot, we walked together in those woods. It was fall and we had just touched, for the first time that I can remember, in his room, under blankets. They were either 101 Dalmatians or Power Rangers-themed—I don’t remember which, only whites and blues and reds that peeked out, bled, and faded into no specific shape. I held my hand still under his jeans and listened to his breathing. I couldn’t close my eyes so I looked to the ceiling. I thought of the blankets on my skin, how the sheets, like his hands, enveloped me.

In the woods, there would not be blankets, but leaves. They would poke my skin with their spines, their coarseness. I’d reach out to pull them around me, my nakedness, but they’d shift, poke, crumble, refuse to cover me.

The arrowhead is perhaps the most crucial part of the arrow, although without any of its parts, the arrow would be incomplete. The arrowhead comes in several options, each with a different purpose and advantage. The type most often used for hunting is triangular and designed to pierce at several angles. Some arrowheads include retracted blades that open upon impact, increasing aerodynamics yet stunting the arrow’s penetration of the target. This, in combination with poor shots, often results in the spilling of the guts or excessive tracking of the deer, who will take too long to die. If the shot is not sufficiently planned and perfectly executed, you will need to follow the blood trail, often marked only in tiny spots at the edges of leaves, and you may not find your kill.

In some kills, like my father’s, the intestines will spill out the bottom of the deer and you must cover your mouth to breathe when you get close to it. When my cousin killed his deer, it was not like this. When the arrow flew, it was neither erratic nor inaccurate. The arrow went straight into the skin above her left foreshank. She fell on the spot—there was no tracking needed—and the blood pooled against her skin, against the leaves beneath.

When he killed her, I wonder if she felt his hands reach into her, exploring. I wonder if she closed her eyes or looked at him, or if she looked out and around before her eyes, like all deer who are dying, went glassy. I wonder if his warm was the only warm to her against the cold air and the harsh leaves.

Somewhere, there is a photo of him holding the deer heart in his hand. The image does not include his face, which I imagine as either smug or smiling, or his dark, thick curls plastered, sweaty, against his forehead. In it you cannot see the arrowhead, which is plunged into that bloody, hard stump, nor the fletching—traditional feathers, green—pushed back and matted by the wetness. You cannot see the nock, either, which, like the feathers, is dirtied; only his hand, holding, exploring, slick under it, and the spine of the arrow, dried and limp, falling like a sigh after the give.

Nichole Rued is an English Composition and literature instructor at the University of Wisconsin-Green Bay. Her works are forthcoming or have appeared in Sierra Nevada Review, Paper Darts, Hypertext Magazine, and others. When not writing, reading, or teaching, she enjoys hanging out with her three-legged dog, Boris, and motorcycling.