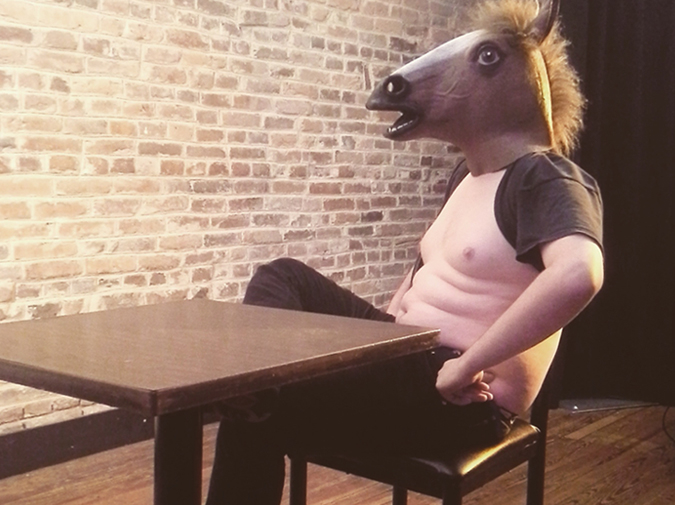 Everyone picks the chairs up and puts them in a circle. Then they turn the music on and you start to walk along the perimeter. After a minute somebody takes one of the chairs away and puts it in a closet. When they get back, they turn the music off and everyone scrambles trying to get a seat. One person is left standing or half-sitting or awkwardly perched on somebody’s lap, and they’re removed for the game’s duration. This cycle repeats until there is only one chair and two participants. The game is over when one of them takes the seat, and this last remaining player is the winner.

Everyone picks the chairs up and puts them in a circle. Then they turn the music on and you start to walk along the perimeter. This continues for several hours, the music infinitely looping, until gradually the participants begin to pass out from exertion. These players are removed for the game’s duration. Meanwhile, the music continues looping, sometimes for days, sometimes even longer, until only two participants remain. The game is over when only one of them of is still standing, and this last remaining player is the winner.

Everyone picks the chairs up and puts them in a circle. Then they turn the music on and you start to walk along the perimeter. Somebody shouts “Freeze!” and the participants have to immediately stop and hold their position, even if they’re standing on one leg. The chairs are then balanced on the players’ bodies at strange and disorienting angles by a performance artist, and the resulting installation opens to the public to largely positive reviews. It runs for two months, then the space is bought by a property developer and turned into a yoga studio.

Everyone picks the chairs up and puts them in a circle. Now the ritual has begun, and the Hooded One prepares the offering for sacrifice: two smears of ram’s blood across the forehead and another down the throat, terminating at the Third Chakra. The blade is then removed from its ceremonial cloth, glittering as the Hooded One intones the opening incantation. Satanas…venire! Satanas…venire! The blade so close now, the gleaming flesh, the binding of the circle. The chairs. The chairs.

Everyone picks the sharks up and puts them in a circle. Then you march around the sharks, eight or nine of them, all hungry and thrashing and hitting you with their tailfins. One of the sharks is removed from the circle and placed in a closet, and when the music stops everyone scrambles trying to sit on the remaining sharks. One player is left standing or half-sitting or awkwardly perched on a shark, and they’re removed for the game’s duration. To the closet.

One person picks the chairs up and puts them in a circle. Then the music starts, and he walks along the perimeter a few times before removing one of the chairs from the ring. When he gets back, the music stops and he scrambles trying to get a seat. A moment passes. Then the music starts again, the player rises, and another chair is removed. The game is over when only one chair is left, and this last remaining chair is the winner.

Everyone picks the chairs up and puts them in a circle. No one turns the music on, so they just sit there checking their watches, crossing and uncrossing their legs, waiting for something to happen. Gradually they start to engage each other, and one by one their backstories are revealed. There’s the civil engineer and the single mother on the run, the high school principal and the former pro poker player. Hours pass, and the players begin to question why they’ve been summoned to this windowless low-lit room with only flimsy folding chairs for furniture—why no one remembers how, exactly, they came to arrive at this moment. Soon, they decide to work together in an effort to escape captivity: The engineer fashions the chairs into a makeshift battering ram, and the former pro poker player calculates the odds that their attempt will be thwarted by government agents or wealthy sociopaths or whoever it is that’s bound their fates together. Finally, it’s the hour of the escape, and the players line the battering ram up with the wall. After a few blows the plaster begins to crack, and after a few more a large chunk of debris falls away. The players steady themselves. A strange light fills the room.

After you died we grabbed all the chairs out of the dining room and pulled them together in a circle. Your mom was staring at the floor and your dad was sobbing into a copy of Reader’s Digest, and somebody brought over lasagna but no one really wanted to eat anything. Outside cars drove by and wind swept through tree branches and a squirrel darted across the roof. After some time I went into the living room and started to look through your music collection. You had hundreds of albums, all arranged alphabetically, some with Post-It notes along the edge indicating the year or genre. I pulled out an album you’d played for me once with a frayed spine and $3.99 scrawled on the cover in black Sharpie. I hadn’t liked it, I remembered, but had still sat with you through the whole first side, had smiled at the way you carefully picked the needle up and blew away a knot of lint, which hung weightless for a moment in the diminishing evening light.

I slipped the record out of the sleeve. Then I sat down, and we waited for the music to begin.

Mack Gelber's fiction has been published in journals including Neon, Joyland, and Vol. 1 Brooklyn's Sunday Stories. He works as a writer and editor, currently contributing to Wall Street Journal Custom Studios. Follow him @mackgelber.