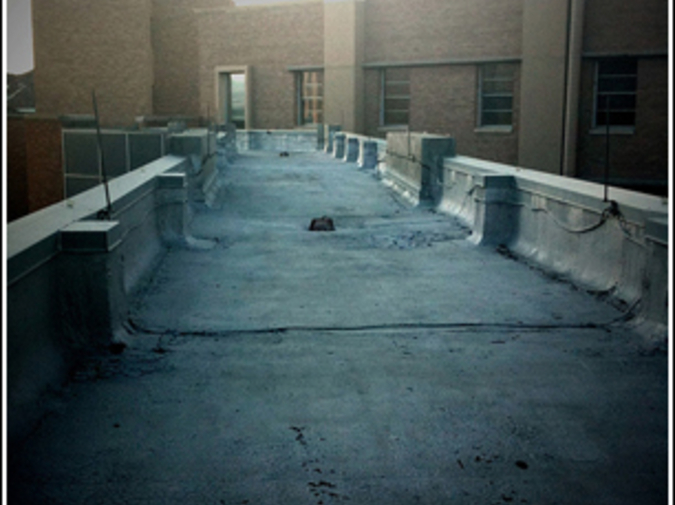 At the hospital where my father is dying I meet an orange man. His skin is the exact color of a Clementine. He breathes from a tank that he carts around with him. “Hello kiddo” he rasps at me from across the lobby or from where he is lying on his bed. At first I am afraid of the orange man until I realize he is a magician. He can make anyone cry with the touch of his hand but not sad tears; no, tears of joy, like when my father bought my mother that necklace, the one she pinches between her thumb and forefinger while she sits beside my father’s bed.

The Orange Man tells me he could take me to the roof if I want. “And from there…” he says with a shrug. I want to go to the roof more than anything I can remember. The hospital is a big building with many floors and from the roof you can probably see for miles. My mother isn’t watching so I go with the Orange Man. We sneak through the lobby and avoid the nurses. He tells me they are enemies, that they want to spoil our fun. The Orange Man takes my hand in his and squeezes my small pink fingers with his large orange fingers and pulls me down the hallway to the stairs.

On the roof the Orange Man shows me all of the landmarks you can see from here. He smokes a cigarette he took from a box hidden behind a loose brick. He smiles as he looks at the sun and he points out different kinds of birds to me. Then we sit down and he tells me a story about a brave dog who defeats a mountain lion.

The Orange Man’s body is like a cocoon. When you touch his skin, you can feel the shaking inside, the small growths and eaters. Some day something terrible will tear out of his chest I am certain. I am certain that he will die bleeding and choking and crying. He will come down from the roof and die on the floor like a dog. He will writhe in pain and the nurses will watch with their black hair over their eyes and swollen feet. They will whisper things to each other in either Latin or certain dialects of Finnish. They will shake maraca’s at each other from across the room as they gather around the Orange Man who is dying in pain. They will sing every song in every language while the moon slowly begins to descend into our planet. Oh dear nurses when my heart opens its butterfly wings release me into the wilderness I have longed for!

Down the hall there is a place called the black room where people can go and pray for forgiveness or forgive others. It is the only place in the hospital this can be accomplished without bruising outgoing spirits. It is a tall room with no windows and black walls. Around the walls are set in high sconces small blank books in which you can write except that no pens work in the black room and nobody can remember their alphabet there. In the black room, you can’t remember who it was you came to forgive and so nobody ever gets forgiven and every time you try to ask the air your words drip like oil to the floor and become obsidian. The floor is completely obsidian and uneven. In places it cuts through your sneakers and slices off parts of your feet. “Do not go to the black room,” the Orange Man tells me.

One night I am with my mother in the room where my father is sick. He is vomiting into a plastic container that a nurse is holding. The nurse is squatting down because she said she has been standing all day. My mother doesn’t acknowledge the nurse. When she squats I can see the top of the nurse’s pale pink underwear. Oh dear nurse, I write in my letter that night, I could see your underwear, you were my secret when my father died.

On my last night in the hospital I sit with the Orange Man. He is whispering things into the air. He has been doing this for days and he doesn’t recognize me anymore. Every time he looks down at me he smiles and then he looks back up, right into the lights at whatever it is he sees there. I go to the black room and pray for forgiveness. I want the Orange Man to forgive me for my visions of his death. He is a prophet, I tell the room. The black room is not black and there is no obsidian or books set in high sconces. When I pray, I pray to a statue of Jesus on the cross. When I speak, my words hover like moths in the air.

At home my mother holds my head into the crook of her neck. We are watching The Ten Commandments. Tomorrow is Easter Sunday. “These people all look so orange” I say. “That’s just how movies looked back then, sweetie.” She pets my hair, curls it around her finger. “You need a haircut.”

You are in my dream tonight. You and the Orange Man are dealing cards. You are each trying to deal a full hand of hearts faster. You are letting the Orange Man win out of pity because he is dying. Your tactic is lost on no one. The Orange Man shoots himself in the head with a very large gun out of shame. The forest creatures gather around his body. They take it into the woods. The woods are burning. The sun says “let the ash age begin,” and all the forest creatures begin to run into the river. The ash age begins with small whispering voices coming through the pipes in the house we share in my dream. They whisper specific messages to each of us, Sheryl and you, your mother, Chester, and I, who am teetering on the edge of an abyss, who am balanced along the maze’s wall, threatening to spill out all of the secrets therein, dangerous for knowing and a dead man for knowing too well. The robins chirp at the dew, scare up the bugs, kill for their children. The dog buries your bones. The moon is naked and ahead of us, finding each part of an enemy we have only pretended to understand, only imagined we could defeat, only with our eyes transpired to see. The robin says “thank you for the compliment.” The dog says “my near misses are going to catch up with me.” Your generous heart says “I forgive you, dog. I forgive you, bird.”

Carlin Mackie currently lives in Western Massachusetts where he studies as part of the MFA program at the University of Massachusetts in Amherst. His work has been published in Laurus Magazine, Microfilme, and Copper Nickel.