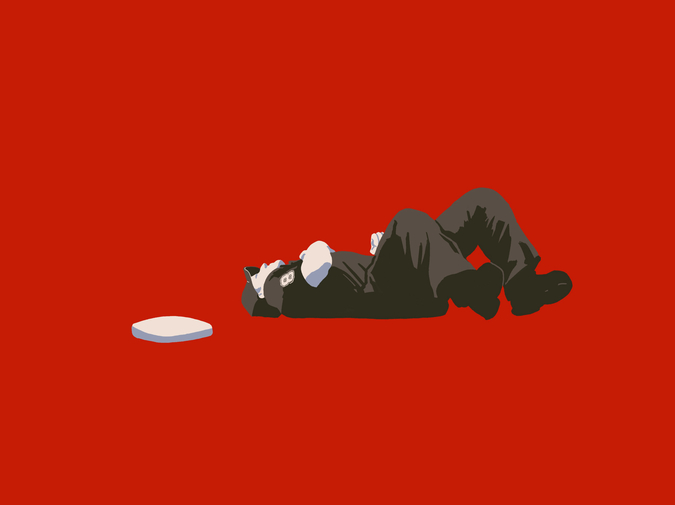 The paper said my team (Sand Gnats) had a chance this year (second season with the new name), so I opened the fridge, opened a beer, sat down, and turned the TV on to watch the first game of the season.  My guy was pitching—first pitch.  He threw it—it looked like a strike.  The umpire went to signal.  Instead he collapsed.  Everybody ran over.  After a couple of minutes of madness and nonsense, the commentator said, “Jesus Christ, I think he had a heart attack. Jesus Christ, I think he’s dead.”

I turned the TV off, put a piece of scotch tape over my half-finished beer, put it back in the refrigerator, and went to sleep.

Before I even got into the office, I had to pump somebody’s gas.  Some lazy full-serve businessman.  I went into the office and put the money in my hand into the register, got a wad of cash for change.  I looked up.  The mini-mart was a crazy scene already.  I grabbed a pack of Chesterfields for later as an old man was annoying a little boy he didn’t seem to know.  “Do you like cherry yogurt?” the old man said to the little boy.  Now became later and I lit up.  “Do you like banana yogurt?”  I took a drag.  “Do you like vanilla yogurt?”  The little boy began to cry.

At that point, somebody pulled up to full serve.  For once I was glad.  I ran out of the office and went up to the guy’s car.  “What’ll it be?” I said.  The guy must have noticed my Sand Gnats cap and he said, “Did you see the game last night—or should I say, ‘the pitch’?”

“Yeah, I turned it off right after I found out the guy was dead.”

“They shouldn’t have cancelled the game. That’s what I say. I mean I feel bad, some ump died and all that, but opening day? Oh heaven, oh mercy, it was opening day!”

“They’re trying to fix things by calling today ‘The New Opening Day.’ No, no, you know? Opening day is gone. It was a great opportunity, exhibited great possibility. Did you see that first pitch Dodriquez threw? It was a strike! Oh heaven, oh mercy. It is gone.”

I squinted my eyes, looked into my head and thought about it for a second.  When I looked up, the guy was driving away—before he even got any gas.

I walked back into the office and lit another cigarette.  The little boy was still crying.  “Do you like cherry yogurt?”  I couldn’t believe it.  The old man was back to cherry.

I got home from work that afternoon and put the game on.  I finished the half beer and started to work on the rest of the six pack.  Dodriquez threw the first pitch of the game.  The new umpire went to signal and he didn’t die.  He called a ball.

By the time the game was done nobody seemed to have died, and my team lost 5 to 3.  I turned the TV off and finished off my 5½ pack.  After that I fell asleep in the chair.  When I woke up, I noticed my Sand Gnats cap had fallen off my head at some point and was sitting upside down on the floor.

John Paul Carillo is a writer and musician living in Trenton, NJ.  He has recently completed a collection of stories, Into the Actual World and a novel Real American People.  He is the coleader, with his partner Anna Meadors, of punk-jazz quartet Joy on Fire, featured twice on NPR's All Songs Considered.