The Nest That Came with the Third-Floor Apartment 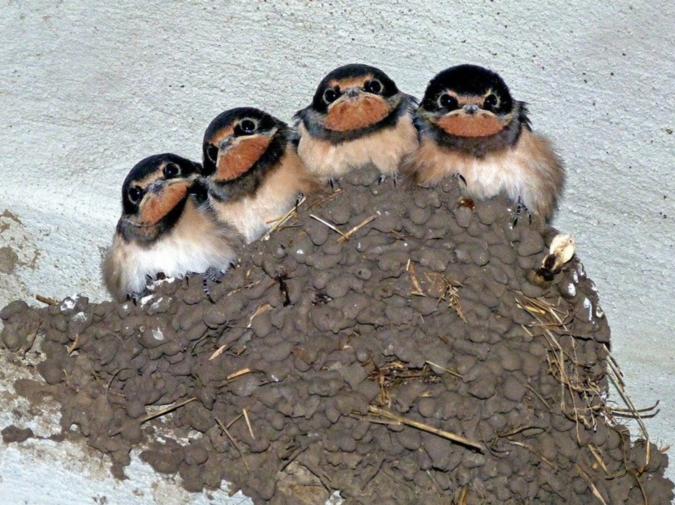 We learned how to live together more slowly than we learned how to live with the swallows. Their nest had been built with years of sunbaked mud, bricks sculpted into organic shapes, while ours was conjured over the course of a month from towers of threadbare boxes. Our new balcony came pre-baptized with a two-inch tall pile of bird shit; we marked it on the move-in damage checklist and left it to accumulate.

When spring broke eggshells open, we watched the babies feed while we balanced plastic dinner plates on our laps. I wanted to buy a birdfeeder, but standing in the garden aisle, we realized we couldn’t even afford loose seed. I woke one morning to find a sauce-stained piece of Tupperware  had become our only piece of outdoor furniture. “Bird bath,” he said over the lip of a mug.

The parents took patrolling flights if we dared to step outside but also when we made a fog machine out of the oven and used towels to fan smoke from every window. The birds—every one of them—did not like it when we yelled. I liked it even less. I was at work when the first baby took flight. I wish you could have seen him, he texted, breaking a day-long silence to tell me how much I had missed. I think he enjoyed it. By the time I got home, both him and the birds were asleep.

Soon the swallows turned their lost baby feathers into wallpaper, renovating the nest with the white of their spent youth. When they finished flying lessons, they came back for a few more nights at home. Then they were gone. Even the parents weren’t there to distract us from each other.

We added the newly vacant balcony to our rotation of shared spaces. When our off-work hours aligned, we’d drag two mismatched chairs outside and share a beer. Occasionally I was scheduled to open just a few hours after he got home. Sitting with our quiet, we’d watch the sunrise crawl across the parking lot. I’d take a sip or two just so I could say we’d done something together that day.

The nest haloed our conversations, the lists we built of everything our parents never taught us—how to disagree without anger, how to smile through exhaustion—but seeing a problem is not the same as know how to repair it. All we could do was accumulate.

After months of talking beneath the empty nest, he asked me to grab one of the draping feathers. We should keep it to remind ourselves, he said. My hand found bone and beak encased in soft down. This baby did not fly away. Its leg was caught in the fall of its first spring. How long had we spent under its mistletoe? We left the bird undisturbed. That seemed right, somehow, even when visiting friends accused us of being morbid.

In a hatching of five, only two birds are expected to survive their first year. But swallows reuse their nests, I said. I read that online once. When we found eggs the next spring, we observed how impossible it was to see the nest unless you were standing beneath it. To know it was here was to have been here before. With last year’s swallows returning to try again, we were glad to have left them their mile marker, and we watched them fortify it with clean mud.

Taylor Kirby is a writer from Denver, Colorado. She is the managing editor at Porter House Review, and her writing has appeared in Cream City Review, Booth, Jellyfish Review, Longleaf Review, and elsewhere.