The Mystery of Art 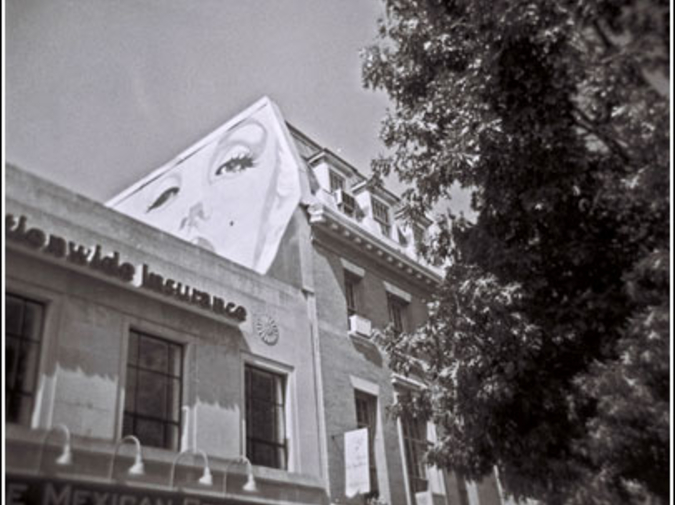 You never know when you’ll turn the corner to find it staring you in the face. You might be on your way to dinner at the kosher restaurant at 9th and South when you’ll notice someone has painted a miniature landscape on a chink in a brick wall. You’ll reach out and touch it. A spot of blue will come off on your fingertip.

As you walk home from that dinner of blintzes and sour cream, something will catch your eye. Glancing up, you’ll spy a grimacing face. From an open window in the building opposite, the lens of a projector will protrude like the barrel of a gun, aiming art at an expanse of cinder block. Look, you’ll say, and wipe your eyes before your lover can complain, Oh for Christ’s sake, not again.

One day you’ll follow a trail of stacked stones, urban cairns, the top stone painted dayglo pink speckled with acid green dots. You’ll follow them until you’re blocks away from where you were supposed to be, staring down an unfamiliar street into a neighborhood you’ve never been in before.

The following morning, just before dawn, you’ll sketch mammoth bouquets onto broad swaths of sidewalk, clandestine, political almost, in your passion to leave art behind. You’ll imagine the expressions of passersby, and smile at the transformation of what was, only hours before, a relentless sea of gray concrete. Your lover will hold the flashlight, impatient. Not because he’s fearful of being discovered, but because he says he needs another beer.

Your neighbor, a quiet contemplative man, will invite you to join him for a cup of Jasmine tea. He’ll hand you a cup, thin as an eggshell. The jasmine flowers floating in the amber liquid will be as fragrant as a whiff of French perfume. When it’s time to go, you’ll step onto the stoop. He’ll touch your arm, and say, You know, you really should leave him.

In the bottom of your bag you’ll carry a box of six crumbly pastels. One night you’ll hand one each to five friends as you walk from one end of the city to the other. You’ll draw a trail of calligraphic swirls and intersecting lines from the smoke filled bar back to your little house on the alley off South American Street. You’ll fall, laughing into your lover’s arms, leaving colored streaks on his sleeve. He’ll brush your hand away and say, “What the hell took you so long?”

On a sharply sunlit morning you’ll narrow your eyes as you walk down one of the bleaker blocks on South Street. You’ll come to an open door. Drawn to the cool black inside, you’ll peer in, and seeing nothing, your curiosity will be satisfied. You’ll start to take a step. Just as you do, a pinpoint of light will flash on, then off again, deep inside. At its epicenter you’ll think you see a waif thin girl, ghostly white, her dark hair hanging to her shoulders, sitting naked, tied to a chair. Not sure what you’ve seen, you’ll wait for the light to flash on and off again. When it doesn’t, you’ll move on.

Half a block up the street you’ll stop and turn back to look the way you came.

An old man, shuffling behind a cockeyed grocery cart filled with newspapers, bottles, and tangles of string will stop and peer into the doorway. The light will flash on and off. He’ll laugh and lean into the doorway before he walks away.

A pair of little black boys, pushing and shoving, will giggle. They’ll move away, then dart back, hoping the light will go on and off again. When it doesn’t, they’ll move on.

A lady who sews brightly colored house-dresses for a seamstress shop up the street will rear back. She’ll search the sidewalk. Not finding a familiar face, she’ll stop a stranger. Together they’ll stare into the darkened doorway. He’ll walk inside. When he reemerges he’ll be shaking his head. She’ll make a face, turn, and walk back the way she came.

Long after you’ve given up trying to solve the mystery of art, long after you’ve left your lover, you’ll still be haunted by the curve of his face, the texture of his skin, the sting of his palm, the sound of it, thwack, against your cheek, the sensation of falling, as if in a dream. And you’ll ask yourself, “Was it a dream? The sound? The fall? His palm against your cheek? The nude in the doorway?”

Twenty-five years later, a Sunday afternoon in early Spring, you’ll find yourself at a party at a loft in Tribeca. You’ll be sipping sake and nibbling sushi when you’ll overhear a guest, a gaunt woman with salt and pepper hair, wearing a cornflower blue linen dress, say, “Twenty-five years ago Guy and I rented a storefront in Philadelphia. We blacked out the windows, turned off the lights, opened the door, and I sat naked, tied to a chair.”

Joan Wilking's short stories have been published in The Atlantic, Other Voices, The Mississippi Review, Ascent, The Barcelona Review, The Harvard Summer Review, Pineldyboz, The Bellevue Literary Review, The MacGuffin and bunch of other lit mags and journals. She is a four time finalist (twice in the top 25) in Glimmertrain's Very Short Fiction and Fiction Open Contests. Her short short "Proper Dress," is included in the anthology, Politically Inspired, edited by Steven Elliott, published by MacAdam/Cage. For 49 cents you can download her short story "Wild Thing" at Amazon Shorts.