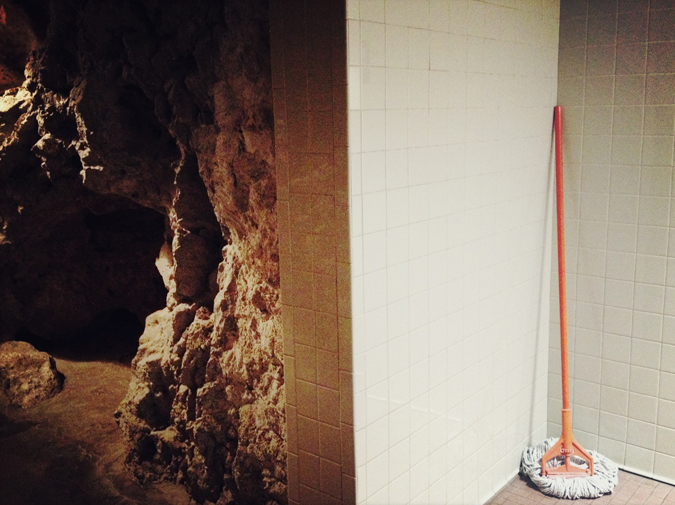 Humans learn occlusion on their way out of infancy—the ability to grasp that the toy still exists when it’s under the blanket.  Blanket does not extend through the bed to the floor, floor does not extend to the center of the earth.  There is a behindness, an other side.  We learn there’s a yard beyond the bedroom wall; sinew under the skin; and eventually, we’re told that beyond the atmosphere, which looks to our eyes a flat and toothless blue, a solar system, and, beyond that, more systems in every direction.

We haven’t lost things when we can’t see them.  Neither are we safe because the danger is out of sight.  We follow the rules of matter even if we can’t discern them.  This is the world of the human adult.  There is something behind everything.  Worry beads, religions, equations, drugs are often required to manage the unseen.

Then one day we walk into a room.  We thought we were walking into a gallery, and at first we fear we’ve made a mistake, took a wrong turn, that somehow, between the door, reception, and the briefest of hallways, we’ve lost our way, wandered into an empty storeroom.  Or perhaps the door was meant to be locked by a crew as yet unfinished with a gut renovation.

We are embarrassed to ask the lint-free gallery attendants, and so we pause, let the room sink in.  Imagine walls thicker than you can imagine, made of white plaster, then put the room in a desiccator.  The plaster is half on the walls and half on the floor—cracking, sliding, chunking to the ground.  We can’t see the motion, but we can feel the infinitesimal entropy at work.

Rubble heaps on the floor.  Fissures at least a foot deep scar the plaster that remains on the wall.  The room’s nearest kin is a glacier—crevices in a behemoth, calving to the slushy sea below.

But the room has none of a glacier’s history.  Blue ice pummels and drags every age with it, deposits anachronism as it goes.  This space is pure white throughout but looks like a ruin.  Not in our generation was it made, and yet it has no patina.  It is a physical conundrum: timeless and ruined at once.  The last room on Earth to be discovered; we must have missed the headline: ON REMOTE DIG, ARCHAEOLOGISTS FIND INFINITY.  A piece near the ceiling flakes and clinks to the floor.  A bit of dust, an echo, then the room is as it was.

What time is it?  Has the room closed for the night?  Is the plaster lit or lighting the room?  Perhaps we’re moving at the same rate as the walls. The longer we’re in the room, the more certain we become that we’ve misapprehended the rules of matter—occlusion does not hold.  Behind the walls is simply more wall.  It will continue to fissure and slough and fall away, revealing yet more pure white wall.  The room will slowly fill with rubble. There will be no more room for eyes, only room for more of itself.  We study the room as if our lives depend on it.  A blink and then we’re gone.

We have been doing this thing with our minds for so long—traveling to real but invisible places.  We know, for example, that there is an apartment next door with a neighbor in it, though we never see inside and rarely hear him.  Sometimes there is a vibration through the shared wall, though we can’t say what it is.  We can picture him, with his rice cooker and still life puzzles.

We leave the only room, travel home again through timed lights, on sidewalks over trains and sewage, and find ourselves standing next to our neighbor, fumbling the keys, nervous because an intimate stranger who may know things about us is trying as desperately as we to get in, to get safe. Surely we know that he has not disappeared when he shuts the door after him, though it may seem that he has, though it may seem that we have.