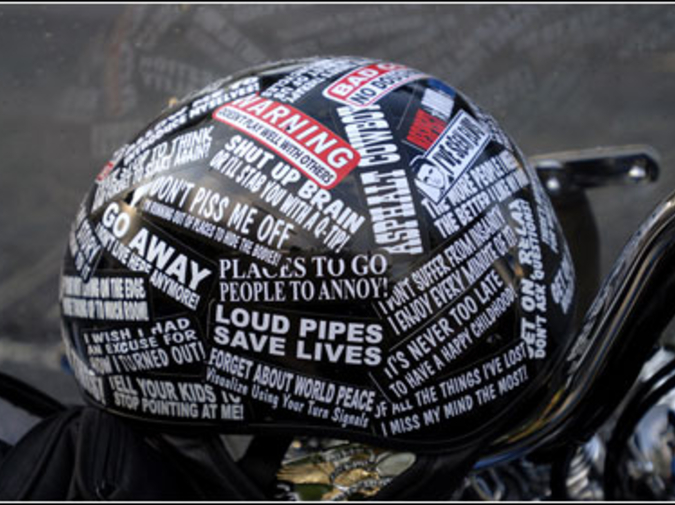 Once upon a time there was this balls-out bike rider out to visit all the Cistercian monasteries in this here good old USA, because something told him he had to. His name was Michael. Something also told him he also had to write a whole series of Biker Prayers, laminate them on index card stock and pass them out at biker stops and gatherings. He kept at it. For a long time he kept at it, sometimes his rides out and back were as long as 7,000 miles. Michael always rode a lime-green, Soft-tail Harley and one day he was tonguing in his mouth all the pits from a Mepkin Abbey apple he had toted all the way from Moncks Corner, Georgia, through stops at Melleray Abbey in Peosta and Our Lady of the Mississippi Abbey up at Dubuque in Iowa for the impressed idea of tossing the core of that apple, neatly left over from a chewy ride, onto the wayside moving off from the Santa Rita Abbey in Sonoita, Arizona. Long had he fantasized in riding that Sonoita road bare-ass nude, in puris naturalibus, and at one moment of the journey his sole garb was an oversize Jerry Garcia T-shirt bearing the legend of The Grateful Dead, and an odd pair of GI combat boots, the buckles yet in place. In the eternal draw that is father and son, the left boot was his father’s boot, the right boot his own that had made its way back from Europe. As Michael tossed the apple core, and spit the black pits floating in his mouth, he suddenly tossed his sole garb, the Jerry Garcia T-shirt, almost in the same motion. All sailed over the bare edge of the road that, in both directions, was empty of traffic.

Everybody swears to it now, at all the bike stops along the way, from Moncks corner to Santa Rita, at all the truck stops from Dubuque to Peosta, through all the high grain northern fields and all the dark southern plantations, that today, on the way from Santa Rita, on a special stretch of that balliky biker's road, there is now blooming a Jerry Garcia Orchard, the T-shirts coming in all sizes.

For 43 years Michael-Michael-Motorcycle had no sight in his right eye, and it came back one day following an eye operation, after stripping off his garb, after riding free as a jay bird, after writing all those prayers and visiting all those monasteries, after doing his Johnny Appleseed thing with his balls hanging out in the breeze, riding away from the Santa Rita Abbey in Sonoita, Arizona.

As Matt Damon should have said in Good Will Hunting, How do you like them fuckin' apples?

Tom Sheehan's Epic Cures, short stories, released 2005 by Press 53. A Collection of Friends,memoirs, issued 2004 by Pocol Press. Fourth poetry book, This Rare Earth & Other Flights, from Lit Pot Press 2003. Mysteries in print are Vigilantes East, 2002 and Death for the Phantom Receiver, 2003. An Accountable Death, is serialized on 3amMagazine.com. He has six Pushcart nominations and a Silver Rose Award from ART for short story excellence, and has been featured in Void Magazine, Nuvein, New Works Review, Triplopia, Perigee, Tryst, Seeker Magazine and Eclectica, among others.