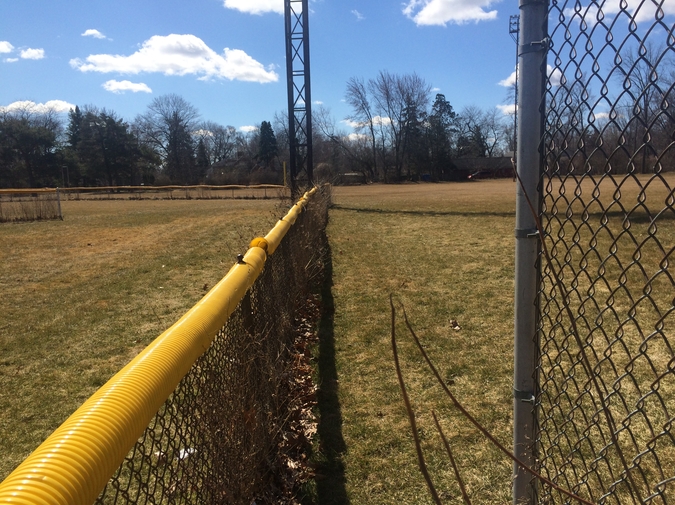 Everyone here has a hitting instructor. It's what we do. We hire tutors to help our kids pass the SAT and hire clowns to make their birthday parties spectacular. We pay to improve the children we received. Why do I pay this guy in cash? Perhaps to hide the paper trail, so I can deny I ever played this parenting game. Perhaps this is why Nathan feels stressed when he comes to the plate. There’s so much riding on this at-bat.

Today’s game is important. Nathan's Cubs team ended their season tied for first with the Yankees – the team expected to win the neighborhood’s Little League. Today’s game is a playoff to see which advances to the countywide Top-Team tournament. And while a season-ending trip to Williamsport for the Little League World Series won’t happen for these twelve year-olds, the Top-Team honors are within reach, especially since the coaches stack the teams and place the best players on one team. That's who the Yankees are – the best eleven ballplayers from our dinky forty-member league. The rest of the twelve-year olds were divided between two lesser teams, or just discouraged from playing altogether. Nathan and his teammates are on one of these “lesser” teams.

I would’ve loved to have been a fly on that wall when it dawned on the Yankee coaches their star players hadn’t secured the tournament bid. It must’ve killed them. Our boys, however, were ecstatic – they screamed, and laughed, and spit their sunflower seeds in the air, instead of in each other’s batting helmets.

“Mom, we can beat these guys!” Nathan said with youthful confidence as we left the house this morning.

Nathan has a new bat. I shopped all last week for it. I needed to understand terms like the drop, metal-fatigue, and sweet-spot before I even ventured in to the store with our wide-eyed son.

"This here bat? It’s the best money can buy," the under-eager manager of the sporting-goods department said to me that first time I tried.

"It's red. The team colors are blue," was all I could think to respond.

"Hold out your arm, son," the salesperson suggested on the next trip. "You want the heaviest one you can stand," he said as Nathan's arm dropped under pressure. "Okay, let's go down a few ounces."

By the time Nathan and I walked out with this new composite bat, we were both pros.

My husband bought the last bat and he’d fretted about it.

“The impact, son, you’ll shatter that thing,” Hector had cautioned when Nathan came to the plate, but Hector was right. We had to ship the last bat back to the manufacturer to be repaired. That old bat is Nathan’s practice bat. It has “do not return" stamped on the handle. He used it in this morning’s pre-game batting practice in the cage. “Batting cage practice voids all warranties,” the paperwork read that came with the new bat.

Nathan makes his rounds again - right corner, left corner, bottom tip. I’m sure this routine isn’t good for bats either, but I won’t suggest Nathan cease his pre-pitch base-hammering. If I must buy another bat, I can handle that now.

When Nathan turned ten, we went to see his pediatrician for his annual check-up.

"Allergies?" I asked when the doctor noticed his rapid eye-blinking.

"Perhaps," she answered. "We'll try him on some allergy medicine, but I'd like to see him back here in a month."

In a month, when the eye-blinks had moved to throat clearing and shoulder twitches, a blood-test was ordered.

"Motor tics," the doctor said and referred us to a neurologist.

"Motor tics," confirmed the neurologist, "are a precursor to Tourette's Syndrome." This was her way to warn us of what lay ahead. “Try to keep his stress levels to a minimum,” she recommended that morning.

The boys on the field today have been Nathan’s teammates since the beginning–from pre-school to middle school, season after season. Most of the coaches are from the neighborhood, and Hector’s men's group is well-represented: one man coaches Nathan’s team, another stands at first to steer the runners around the bases, and then, there’s Mel, today’s outfield ump.

Right now, the Yankees have three runs to our two, but the Cubs have a runner on-base. If Nathan gets a decent hit, he could bring in the tying run. He nods at the base coach, takes a few practice swings, and enters the batter’s box. Right corner, left corner — I watch the familiar pattern as the pitcher throws out the first ball.

"Strike!" yells the umpire. Actually, he just grunts "huh," but since I keep score, I know how to interpret these coded messages.

For years, Hector woke up early each Friday to spend a few hours with a group of men to bond over bad coffee and a breakfast casseroles. This tight-knit group of men helped each other through everything — from job losses to marital difficulties, nothing was untouchable for them. When one of the men was deployed, the guys pulled together to support his family — helped with yard work and odd jobs around the house. When Nathan was eventually diagnosed with Tourette's, I expected my husband to turn to this group for support. For Hector, however, the plan was silence. While I was consumed with investigating everything I could learn about the intricacies of the illness–does diet make a difference? Should we have Nathan’s tonsils removed?–Hector took him up to the ball field to work on his swing.

“He needs to focus on something other than the negative," my husband often told me. "Life throws curveballs. It is all part of the game.”

Nathan nods in agreement with the ump’s call and gets ready for the next pitch. I may be biased, but I believe Nathan’s the most polite ball-player in all of Little League. Some kids argue with the umpires, some kids cry; our kid takes the calls – good or bad – and keeps playing.

Nathan turns to face the pitcher, one of the Yankee’s back-ups. This one is the coach’s son. He is good, but not their ace. Most teams have only one decent pitcher. When that player reaches the pitch count – in place so coaches won’t ruin junior’s arm before the pitcher can turn pro – the next pitcher comes in and walks the opponent to victory. However, today’s behind-the-plate umpire won’t let this back-up pitcher walk Nathan. Today’s behind-the-plate umpire is the Yankee’s coach. He’s also the pitcher’s dad.

School became a challenge for Nathan after his diagnosis.

"I've moved him to the front of the classroom," said his teacher that third-grade year, "so I can keep my eye on him."

Nathan bothered his desk partner with his arm punches. I wanted to explain to the teacher our son hadn’t actually hit his classmate, that Nathan simply received a signal from his brain to move his arm, repeatedly. I wanted to explain why front-and-center of the classroom would only exacerbate his already elevated stress levels and make it hard for him to control this particular tic.

"He must learn how to run without your interference.” Hector told me, instead. “Life throws curveballs, and Nathan must learn it is all part of the game." Hector always had a baseball analogy ready.

Hector and I used to ride up to this field when Nathan was really young. We’d put Nathan in the baby-seat, pick up a pizza from the corner parlor, and enjoy a twilight game. Hector’s favorite story was the time the mother got upset after her son hit the ball in a T-ball game.

“You’re running the wrong way,” she yelled to the bobble-headed boy as he ran to third. He couldn’t have been any older than five years-old. She turned around to Hector and said, “They just don’t teach the kids the basics anymore!”

I mark another strike in the scorekeeper’s book.

Our curveball was thrown four days before Nathan’s tenth birthday. Hector was out of town all week. He was what he liked to call an “away-team auditor” because he spent lots of time driving to and from the small towns for work.

"If they build it, I will come audit,” Hector reminded us when he left Mondays to visit clients in Georgia, Virginia, or any place in need of his services. The week of Nathan’s birthday, Hector had driven to the Panhandle.

We were used to this schedule. I took Nathan to school, to practice, to the doctor; Hector came home late Thursdays and met us at the game. When he didn't arrive that night, by the end of the third inning – Little Leagues only get six – I began to worry.

"Where are you?" I said the first time I called. "The game‘s half over."

“Hector!” I yelled in the second message. “It’s the fifth inning. Where in the hell are you?”

On our way home, we grabbed our usual pizza-to-go from the corner parlor–mushrooms, olives, and ground beef with extra-cheese. Nathan showered. I threw his uniform into the laundry for Saturday's game. We met in the kitchen to devour dinner while it was hot.

"Save some for Daddy," I cautioned Nathan who ate another piece of the cheesy pie as I reached for the phone.

“I guess you’re out-of-range,” was the last message I left Hector. There was a large dead-zone just west of town. I made believe he was close.

The officers wound up on our porch at ten o’clock. By then, they'd already removed Hector from life-support at the hospital in Gainesville, where they'd flown him after the accident. I didn't wake Nathan. I sat in our den and watched the Yankees beat the A’s.

Right corner, left corner, bottom tip, flip the bat around once, twice, three times. Nathan's feet are in position. His arm is framed at the perfect angle when the pitch is delivered. I hear that awesome "crack" as he connects with the ball and ropes one over the first baseman's head. Nathan takes off toward first. He is waved along from the sideline coach’s box, and the runner on second – who was already dangerously past the short stop – rounds third. The ball drops just over the first baseman’s head, a few inches inside the line. The whole team shrieks.

Nathan pulls up, turns to pick up the bat he tossed out of the way, and heads back to the plate. The player crossing home plate jogs back to second. Nathan’s coach flies out of the dugout.

"Foul? That ball was in fair territory!"

“I called it foul,” Mel tells him.

"I didn't see it," the Yankee’s coach answers from behind the plate.

We caught the rest of their conversation later when Mel swung by to see us at the house. The conference on the mound with Mel and the two coaches was held in hushed voices.

"I'm awfully sorry, Nathan. I blew the call," Mel said that night, and every time he’s seen my son since.

Nathan always shrugs. “It is all part of the game.”

KJ Roby is a native Floridian. She spends more time reading than is probably healthy. She graduated with a BA in Politics from what was then Randolph-Macon Woman's College. Her writing has appeared in Rio Grande Review and Pif Magazine among others. And, like that yellow card in the Monopoly game, she won second place in a writing contest in Defenestrationism, only she collected $25.