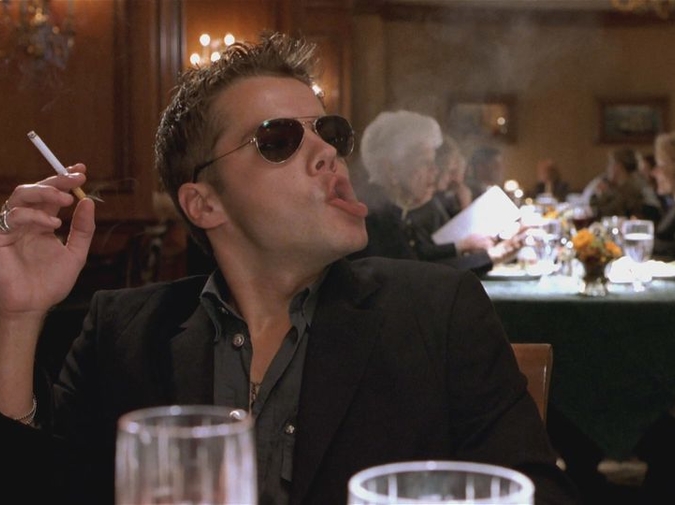 Bret Easton Ellis might be an artist because he was bounced around at the fringe of his class. His family was affluent, but not gaudily so in the context of the old money neighborhood he went on to render with such numb precision. This pack aberration is one reason why, when writing American Psycho, his brain had the anomalous propulsion to black out and return with a level of violence gifted and transcribed from another dimension. He was a clinician against tone, cataloging Generation X’s vacuum, the first generation disappeared by technology, looped mean and ironic through a postmodern garage sale culture. Critics of his era took to bitching about the hollowness of everything with such dire concern that, by the time I could read, the fickle coin of the zeitgeist was flipped and earnest, mindful twerps (so gone past disconnected and back to caring that they found a new font for feelings) were back in favor. Gen Xers, if once considered vapid, have been rebooted as the forsaken gods of some ethereal war on this delicate culture, their distant snark is now a type of grit considered almost fetishistically Stormtrooper. What would be left of center at the end of the twentieth century is, to the counter culture these days, a fave for Hitler. You need Boyd Rice on speed dial just to giggle about it. Ellis’s anti-immersive abyss patterned itself beyond classification and has been the boon of cinematic adaptation. Failing the availability of a Frank Perry or maybe Dan Zukovic (Richard Bates Jr. could do it), Roger Avery is the sole director to nail Ellis. Mary Harron came close, but laughed a little too hard at the source material. Avery converted comedic irony into a scream and the scream into a void and used the bodies screaming as proper blood props for a mixed vision that portrayed the man’s work beyond parallel. The performances in Rules of Attraction are a singular freak show of maniacal charisma so unmatched in cinema that James Van Der Beek disappeared from stardom only to reemerge as a split version of his persona. Scream turned self-awareness hip and kept the canines intact, the beginning of the end for slackers, because Dawson’s Creek then petered that style into soap, and where Van Der Beek redeemed himself beyond reproach in Rules, culture started scurrying for justice (smart soap operas and Jerry Springer predicted the je ne sais quoi of the internet). Brief, silent tags bookmarking The Informants came close to Ellis’s reversed tone, while the rest was a mess. I believe The Canyons struggled because the actors were bodies without presence, which, ironically, is exactly what you want from Ellis, and I am not a critic who will ever bitch about emptiness, the actors can be just a body, Beckett fans and I prefer that, but, the body must have the capacity to deliver something beyond a visual feast, if dialogue is necessary. Dialogue is not necessary in The Deleted and none of the hot people involved fair well with it. I know our man knows plot doesn’t matter (his short film for the opera was brilliant), but I picked up on some. Not a huge problem, because it’s a tone-poem with a synth score, and that is always tubular, forgive me. The next Ellis masterpiece is forthcoming and his podcast helps me function. I refuse to blame him for deserving an amen.