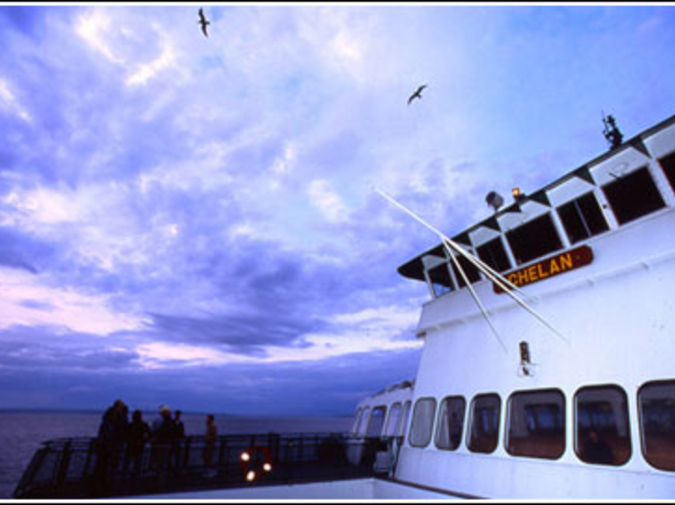 The earth is deep brown and peppered with crows. Sorry-looking cows nuzzle the frozen refuge. Two mongrel dogs, skinny, tentative, sniff at my backside. Submerged concrete -- cuboid and rectangular -- creates billowing white water as if here the river whipcracks like sheets from a crumbling Soviet balcony. Small berries, black and round concealing outlandish pips, pulp under my bare feet, empurpling my skin. The sunlight on the surface of the water turns the river into the combed-back and pomaded hair of a murderous dictator -- the river current his parting, the swans his dandruff, the crayfish his lice.

You are smaller. You spend less time asleep. I watch you curled on the futon, dream-twitching, your sharp canines glistening with drool. Your legs are short and thin, your ears small and round, and your mouth drops away to a pointed whiskery chin. Your hair, thinner than my own, dark grey with red undertones where mine is yellow and lined with rust. Your facial hair darker still. You never shave your legs, your back, your shoulders. I think. I say. Itâ€™s not working. Itâ€™s over. We should go our separate ways. I think. I say. I leave. Itâ€™s the difference that will not disappear.

Through the snow we tread. Our wheelbarrows made of wood carrying stones hued from mountains with one-sided picks, blunt axes, American shovels. On tick -- our water bartered for metal tins to use as mugs in which to hold water, our mugs swapped for rags, our rags traded for heavy black bread. In the night, the criminals beat the political prisoners. In the night, they come to collect the corpses. We are the undertow. We were the buoyant. We will be the expelled. The carpenters are out of work. The bodies have secret motives. The light never fades to dusk. The morning never becomes noon.

But I cannot lie to myself. Look, there in the water -- despite the hair dye, the teeth extractions, the crash diet, and the cups of coffee to keep me awake, we are different. Too different. I say threadworm. You say hookworm. I scratch behind my ear and dislodge some kind of insect. I look down at it. It appears to have wings and an end that bites or sucks. Or both. I crush the beast under the pads of my foot and using my long curved nail flick it into the river where it floats for a while, is investigated by a lone duck, then sinks to the riverbed and is lost among the litter and the pebbles, the stones and the bones.

Right from the start, I knew the coup would succeed. However much time it took. The minks had been liberated a week before, and then the sable, but we were left to fend for ourselves. We watched the Bald Ones cut with their tools -- snap snap -- saw saw -- zizzer zizzer -- and became excited as they dropped parkas and blankets over the barbwire strung like paper-chain killers along the top of the electrified fence. We heard the minks glissading over the ice, the sable sea-serpenting through the snow, but our cages remained closed. Then we smelled the paraffin, heard the insect click of matches, saw the lurid fires. Fear made me empty my bladder and I watched in amazement as the steaming liquid turned the snow to orange mush, then yellow soup, and the hole it left, perfectly round, was soft and diggable. I gathered the others around and we urinated until a gap appeared beneath the chicken wire. We were free.

The lepers mingle, hobble in the mud beside us, steal the heels of our loaves, sip from the icy water. Young men patrol the watchtowers, their noses turned up at our stink. At the end of the day and in the morning, the soldiers search our anuses for hand-made spoons, hand-wrought shivs, rolled up papers full of love and hate and poetry. We smell the shit in our trousers, dried to our skinny legs, frozen to our frostbitten buttocks. It is said that the guards piss in our soup. Our soup of water and cabbage, the soup of our dreams.

The others headed for the lights of Arkhangelsk and then, maybe, Finland. I turned east, and by way of the great northern forests I came to you. I sniff myself and the stench of the taiga is still upon me -- the medicinal reek of the pine, the spruce, the fir, and the farty waft of the muskeg. After months of dodging wolf and weasel, eagle and lynx, I arrived in Vladivostok, and from the heights of Mount Kholodilnik looked down at the ships in the bay, some of which I hoped would be bound for Japan.

My hair, the winter remains of a summer cobweb, descends in wispy spirals to the tarmac seven floors below. I lean against the balustrade, facing away from the city and look at my reflection in the sliding glass doors. I have put on weight since arriving in Japan. My waist thick, my limbs podgy. I am ill defined. Gone the protruding ribs and sunken eye sockets of the crossing. I wipe my mouth and find there a particle of prawn, a sliver of wasabi. Our final meal. Our last supper. With my pink and brackish tongue, I lick the food into my mouth, swallow the spicy morsels. I belch.

Our teeth are black and falling out, we keep them to use as dice. A goner went in the night and we rolled him in the snow and took his clothes and carried him back to the barracks and laid him on his bunk and eyed his emaciated body with its withered muscles and bandy legs, his hair crawling with lice and fleas and we carved him up with a frame-saw -- zizzer zizzer -- and buried him as we worked piece by piece under the frozen soil of the camp and the guards never asked and we never told and in the soup at the end of the day there were pieces of meat stringy and fragrant and bones and marrow and fingernails spade-like and yellow.

The river beckons -- its swirls, its depths. The salmon fry caught between the sharp jaws of a naiad, the eagle mobbed by rooks, the mighty Chinooks fup-fupping to base while the Sikorsky Black Hawks zizzer zizzer like giant hornets overhead. My high-pitched bark is lost among the click-clack of the pachinko parlours, the warbling simulants of the karaoke bars. It is now 5:30pm; my bark becomes a whine and then a whimper. I watch as you turn to the window, ears cocked and listen as the cityâ€™s loudspeakers play Hawaiian guitar music warning the school children to go home, persuading the crows to return to their nests, and beckoning the night things to slowly awaken.

You sit up and eat your muesli made from oats and berries, tangerines and frogs, the inky inverted commas of your mask stained with sleep tears and loquat juice. You rub your eyes -- cute -- and call out, "Tanuki! Tanuki! Where are you?" I do not respond to my nickname. It means nothing to me, to who I am. Who I was. I am not of your kind. Our DNA unravels into single threads. I say ussurienesis. You say albus. I lift my head to take in the diesel fumes from the train lines, the aviation fuel of the passing jets, and I am transported back to that fateful night among the scorched cages when I watched the abandoned nutria gnawing impotently at their razor-wire confines, their hides torched and crackling in the approaching heat.

Steve Finbow lives in Japan. His fiction and non-fiction have appeared in many places including: McSweeney's, Me Three, Stop Smiling, and the wastebasket. Mrs. Nakamoto Takes a Vacation, short-listed for the Willesden Herald International Short Story Prize, is now lost in a folder somewhere on his iBook. He has just finished writing one novel -- Balzac of the Badlands, and has started writing another -- The White Gardens, and yet another --Circus Circus. Soon, he will be in Tokyo, Hong Kong, London, Dubai, and Johannesburg.