The Daughter's Name is Daughter 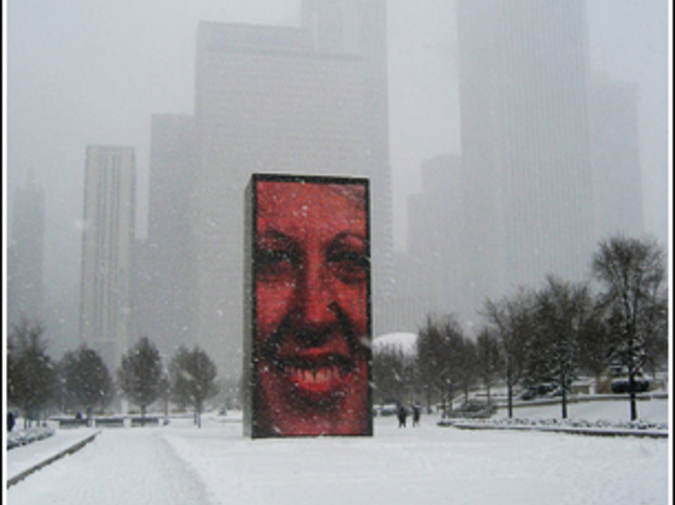 so there's this girl, as there always is, except she's a movie star, which figures, since this is me, telling you a story you aren't likely to believe anyhow, and she's not very approachable, isolated you might say, in her backstage bus, corner booth in the diner, select company, upstairs on her balcony watching nothing in some small town shoot somewhere, while downstairs her supporting cast tries to be bigger than life among the locals, doing tequila at the bar and heroine in the bathroom, and she's about to undertake this stunt, her hallmark, these stunts, performs them all herself, toes up to the edge of a pink granite cliff made pinker by the crew, a little color on film worth a fortune in computer falsity and pixel-matching later, getting the enhancement to look right on her skin, in reflection, in her eyes, that's where you lose money when you go computer, the pinks on pinks, the pinks on tan, little gradations, I've done the math, the man hours,

so she's there, ready, and somehow I'm there, unready, because I don't ever come up that close to the shoot, or to the bus, or to the balcony of her hotel rooms, I think it was room service, some little dispute about cutting all the legs off the chairs, taping them back together so they look legit until touched later, one of Brenton DiPietro's funny-funny games, in boredom, when there was no boy to bang, he's waiting below, gone forward in the scene with banditos close behind, Ava, her name is Ava, I think you know who I'm talking about now, Ava Leon, she's there, ready, toes on the pink edge of nothing, a big vista of blue and tumbled boulders down below, she shouldn't have seen me, and it shouldn't have mattered, me, I'm trying to figure out what happened to the legs and how to get Brenton to admit it so that I can recoup the couple hundred from his personal account, that's what I do, a clean-up book-keeper, janitorial work, no credits, no ASCAP, no reason that she should see me, I know, you wonder, what a load of bullshit,

but she grabbed the wire, the zipline, which _would_ be erased by computers later, coursed down touching foot-by-ten-foot leap, daintily, each step along the slope, like a winged antelope, until, unscripted, she let go completely, timed, to land on the cross-pole that supported the zipline itself, a thing that couldn't be erased without leaving her suspended in mid-air, ruining the shot, disbelief, turned, without harness, staggering marionette in the wind, to face me, me alone, one-hundred feet above, and give me the finger

if this story arced more classically, it'd next be illicit romance, or something, a golden, glowing honeymoon time in life, a touch of reflected fame, at least in my fantasy of how it should have gone, and then tabloid coverage, who is this guy?, this hunk accountant?, how'd they meet?, and someone would give a damn, pay for photos, but it wasn't like that, I didn't see her again up close, that spark of whatever connection, for long enough to forget, or think I had forgotten,

summer, an unfortunate business with rental cars, several of them, just close enough to the filming site to be questionable, our expense or hers?, like Brenton's chair legs, harmless really, so I thought, but when I got on-site I saw she'd done some good damage, nothing to herself though her eyes were wilder in their blackness than usual, the vineyard field ruined, trampled by the Ford, then the Audi, then the Hummer, cut crisscross through wire suspension lines on which the grapes clung, the mustang slipping under most but shocked to a stop against an end-pole kitty-corner in the field, the Audi apparently entering at higher speed, may not have touched ground at all from the corner of the road, off the embankment, to where it struck nose-first on the scree, but the Hummer, she still drove it, an unstoppable force, the tensioned suspension lines in the field snapping around her like alien cello strings, pitched deeply, whipping up, lashing against the side of the rental with the sound of empty oil drums dropping onto concrete, cutting like a mower through the decimated crop,

it would still be usual enough, if we fell in love then, that moment, if I wrote the check that covered her losses, placated the vintner, wrapped her in a blanket and took her to my quaint and empty Santa Monica bungalow, but that's not how it happened, no, next I met Daughter, leaning on the trunk of a sedan overlooking the field,

she likes you, Daughter said,

she rents them, I drive them out here for her,

nice, I study a bunch of crushed green grapes, little seedless things cast up on the embankment beside me, smell them, they're green all the way through,

you gonna pay?, she asks

I've heard about you, I say, you're Brenton's?,

she doesn't know for sure, I don't think, but it's a good story, fits, cover for him,

Daughter keys open the trunk of the sedan, withdraws a tranquilizer gun from between the front seats, smooths the red feathered dart, inserts it in the breech and walks out toward her mother in the Hummer in the field,

Daughter called when Ava hung herself by the feet above their swimming pool, which involved a crane, two crane operators who spoke little English, and a trip to intensive care for the circulation in Ava's feet.

Daughter called when Ava jumped from a train outside Salinas, we didn't know where exactly, nor the damage done, but found her walking on a road up toward San Miguel Canyon, among the heather, the smell of Redwood, tar, and heat close to her, we stopped for ice cream on the way down.

Daughter called when Ava hired a man to throw knives at her in the bedroom of the rancho, and the man missed, so I took the knives and dropped them over the edge of the ferry to Catalina and Daughter drove Ava to a doctor friend where the stitches in her legs were cosmetically concealed all in secret.

Daughter called when Ava was sleeping, innocently as she could, and told me things that mattered until we were both too tired to talk,

she likes you, Daughter said,

which, non sequitur or not, really started the golden, glowing honeymoon time in my life, albeit without the hunk accountant headline.

if I were telling you a normal love story, one that you'd believe, there'd be conflict here, some yelling, not the quiet, not the glow, not the peripheral beauty of rescue, hoping for rescue, to be called to rescue, peripherally, because I could give a damn whether Ava died, or whatever was her aim, as long as I was there, like a father or an uncle, for Daughter,

so the conflict, if this is one, no starlet lasts long, there is rebirth, a late life career, new roles as wiser women, but less stunts, less leather pantsuit leaping from skyscraper to skyscraper, and this didn't work for Ava, not by any means, the lieu of filmed stunts the personal, quiet, dangerous cliffhangers grew worse, more frequent, drawing Daughter and I closer, though exhausting us at the same time, how I could cover the books, spend what little Ava earned to replace sailboats, un-burn restaurants, remove graffiti from the insides of her friends' mansions, their anger biting into, cooling perhaps, Ava, just for a moment, as she moved from sleep to the next high to sleep again,

she insisted she do the stunts herself, superficially fine, but beneath a sheen of near-natural skin, she had bolts, wires, plastics holding where bone and tendon should,

I like you, Daughter said, again and again, as if it were glue, her own glue, not nearly as artificial as the items holding Ava together,

she turned fourteen, Ava threw a party, Daughter left when the flame-eating man splashed a circle of gasoline around Ava and offered her a sword,

Daughter and I went up into the hills above Hollywood and walked among the scrub, twilight, hot and shimmering too close to us, the city and the angels below.

if this were a story, one you wouldn't believe, it would probably end right where it began, same scene, reprise, part III because the marketing vehicle is in-place already for a sequel, Ava in the role of the action heroine's mother, wise woman advisor to the headstrong, but she took the come-back role not just for money, I thought, Daughter thought, but because the zipline, her zipline, our introduction, would be done in the new movie just as it had been in the old, a return to glory, a chance to say something again, like giving me, the world, the finger,

Daughter turned sixteen now, had blossomed, had gotten the role of a lifetime, her first, the big-break playing herself as Ava's daughter in that fiction, in the scene, she was the starlet now, the starlet waiting with Brenton DiPietro down below, in the dusty canyon, as the bandito accountant waved a bill for broken chair legs at Ava on the cliffside, will I take this from your expense account senorita?

no, no, Daughter says, from below, her line, or

I've got the banditos behind me,

Ava smiles, toes the edge of the pink-dusted cliff, reflecting perfectly pearl-like in the sunrise,

toes it and smiles, she'll land on the crossbar again, it will need to be reshot, the whole thing, I've already accounted for it, advised the producer, a new kid taking on the remake, she'll need to shoot the zipline twice because she intends to jump up onto the crossbar and screw up your scene, you can't erase that from the film, you see, and the zipline just isn't enough thrill for her, a reprise,

she steps from the cliff, grasps the soon-to-be-deleted handle of the zipline bar, skids downward into, above, the canyon, when the line screeches, pings, shoots backward above my head to splatter the bill I hold into a thousand shreds of confetti that float around me in my glowing golden honeymoon, my newly everlasting,

no finger, but I look away from Ava's mangled body as the others rush toward her, look toward Daughter, not bashfully at all, it's all on tape, all perfect,

Daughter blows me a kiss and slips her dart gun back into the band of her sombrero,

for in life, unlike fiction, fortunate accidents and happily ever after happen, now and again.

Benjamin Buchholz is a US Army Officer. His book of prosy-poems -- "13 Stares" -- is available now from Magic Helicopter Press. Also, see http://benjaminbuchholz.blogspot.com