The Collapse of Bee Colonies 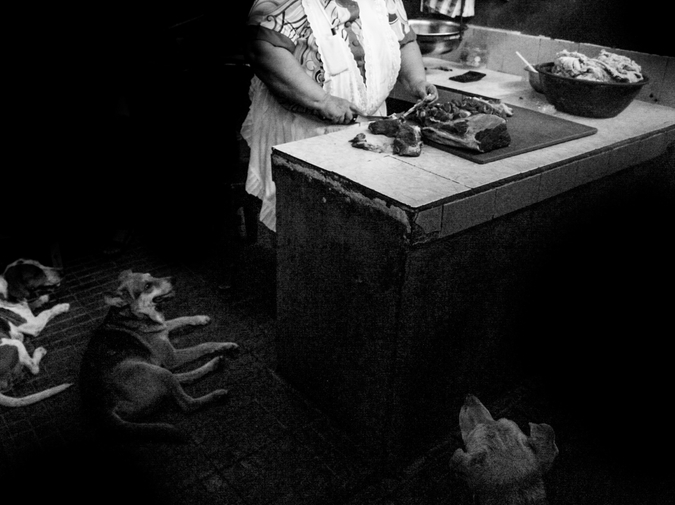 On the morning of my sixteenth birthday I made a list of stuff I didn't believe in anymore. For example, how my big sister still wore dumb-looking animal hats. She was living in Denver now, answering calls for a sex chat company, talking to customers while they beat off, she said, and getting good at playing the chirango. She told me this on the telephone.

"Did you have to tell me about this on the night before my birthday?"

"Yes, indeed I did, because I am always very honest with you," she said.

A long time ago, when I was phobic of walking past yappy little dogs, she said, "imagine you are wrapped in a tight-fitting cocoon, and it covers your ears and other tender parts.” I followed her advice, and glided past them. That was my big sister, the one who taught me how to feel safe inside my skin.

"Don’t let her looks fool you. She may look sweet, but this one tried to stab me to death when she was five,” Ma said to Randall, who was becoming her boyfriend. She giggled, called me her “little assassin."

I remember it differently. I was holding a plastic fork, walking in circles, following the oval road in our braid rug. Ma stepped right in front of me with a martini in her hand, blabbering about Ohlone arrowheads. “We can find them in our own backyard if we dig deep enough,” she said.

She hated the politicians in charge of our country, and wished we were part of an obsolete tribe. I would not have stabbed her on purpose. I wanted to make sure she was real, perhaps. She was the only mother in town who dressed up as an Ohlone squaw on Indigenous People’s Day. Last year, even after chemotherapy, she wore a child’s Pocahontas wig.

My sister was always unlucky with boys. “I have the personal magnetism of a toxic caterpillar,” she said.

"Who told you that?" I asked.  "Nobody." Her hair was straight and buttery. I envied it. Some nights we watched TV alone in the house. Ma and Randall were at a ballroom dance class. There we were, acting like old people, stealing some of Ma’s gin. Me petting my sister’s hair instead of the cat.

Now, my sister’s bedroom resembles Dad’s old study, empty and dry. As though the air has been squeezed out.

"I want to look like a Navy Seal," I told the cutter.

"Cool idea," he said. He cut off my curls, and shaved the rest.

“Now you need a tattoo," he said with a wink. “Got a boyfriend? Think he’s gonna like it?”

His phone jingled. I stood up and looked at myself closely in the barber shop mirror. I looked a lot better this way. Ready for combat.

Randall was an exterminator. A short man with a huge plastic black widow spider attached to the hood of his truck, he’d loll around on our sofa, arms dangling.

He knew the names of every bug on earth.

“What kind of spider lays eggs in abandoned bird nests?” he’d say. Sometimes Ma and Randall wandered over to The Olive Pit, where they’d drank until Ma smelled like a sea lion.

Now it’s late October, and pomegranates still aren't ripe. Nathan over at the grocery says he doesn’t know when they’ll come in. He has a new eye tick.

My ears and neck feel cold from being in the refrigerated part of the store.

Randall is usually sleeping at our house on weekends, so I sneak into movies. I’d rather live in the grocery store. Nathan has a key. I wonder if anyone has ever lived inside there.

"Honey bees are dying and you are next," my t-shirt says. He glances at it, grins, then looks over to where the pumpkins and gourds are piled high. Says he likes my hair this way because it shows my neck. He says he remembers my father, that I have his smile. I say, "thank you” but I don’t show him I’m pleased.

“I’ll bet your dad understood things. My father says he fucking hates bees. He says if they disappear, we won’t have to step on them, wouldn’t that be great.”

We look at each other until my neck warms like a space heater.

Meg Pokrass is the author of a new book of flash fiction, ALLIGATORS AT NIGHT. She has published four collections of flash fiction, and one award-winning collection of prose poetry, Cellulose Pajamas, which received the Blue Light Book Award in 2016. Recently her stories have appeared in Tin House, Electric Lit, and Tupelo Quarterly. Her work has been widely anthologized, including Best Small Fictions 2018, edited by Aimee Bender, and two Norton Anthologies of flash fiction: Flash Fiction International and the forthcoming New Micro. Meg is Founding Editor of New Flash Fiction Review, and serves as curator for Flash Fiction Festival, U.K.