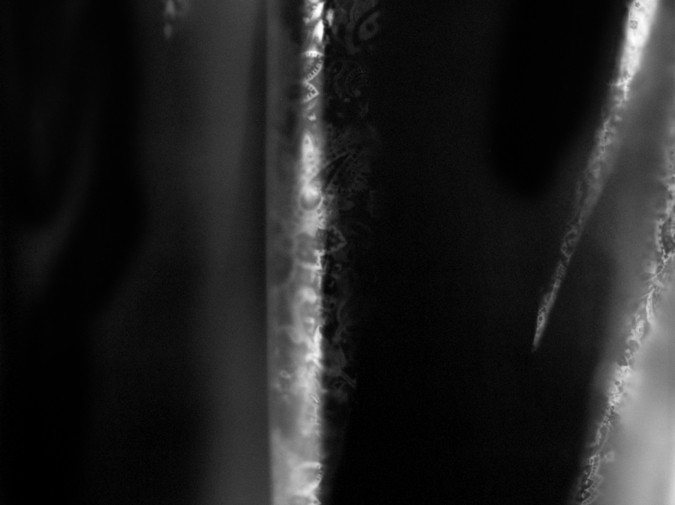 In quantum mechanics, which I do not understand, the tiny bits that make up our world exist in a measurable way only when they interact with other tiny bits. Between these interactions, there are only guesses to where they might be, if they exist at all.

As for me, a much larger bit, I exist when I am alone in my apartment. But there are hours or days where I see no one, talk to nobody, and do this existing only for myself.

I watch TV, surviving at low hum as episodes autoplay. My neighborhood is rich with car horns and passing conversations, but I leave the blinds down. Their yellowed slats give the appearance that my apartment is unoccupied or at least uninterested in what the outside world has to offer.

One afternoon I was scrolling endlessly on my phone with PBS’s NOVA playing in the background as a way to feel that I wasn’t wasting time while I was wasting time. My phone popped up a live feed of the front door since the motion sensing camera had been triggered. I saw a man approach, armed with a clipboard and a big, blue government nametag identifying him as Sean the Enumerator, which was a fancy word for census taker.

I lowered the volume on the TV, noticing a small tremor in my hand that I attributed to the potential conversation. I reminded myself that census takers have a lot of ground to cover. Plus, I’d sent in the appropriate paperwork hoping to avoid this encounter.

When Sean the Enumerator knocked I realized that though I’d filled the census form out honestly, circumstances had in fact changed. At the time, I had not occupied the apartment alone, so I’d printed the name of Person 2, gave their relationship to me, Person 1, and marked their sex, age, race, and ethnicity.

A scientist on TV moved her mouth silently. She’d been explaining where general relativity and quantum mechanics diverged. She, I assumed, would understand the importance of counting and being counted, just as Person 2 had understood concepts like data analysis and resource distribution.

But it was only me, Person 1, sitting motionless on the couch. Another knock came. I justified my cowardice by assuming that the census would correctly identify hundreds of people on my block, thousands in my neighborhood, and so, so many in the city. Though my apartment now lacked a Person 2, it would cease to matter as time passed. Other people would flock to the city; more neighbors I’d never meet. And any of the people that had been counted correctly, including me, could move or die, making the incorrect count accurate once again, if only for a moment.

Through my phone, I watched Sean the Enumerator step off my stoop and move on down the block. I wanted to rush outside, catch up with him, and tell him that in his final days, Einstein wanted to believe that the tiny bits that construct our world existed no matter if they were interacting with another tiny bit or not. I wouldn’t tell him that Einstein died without understanding, though, unable to explain the as of yet unknowable.